Rain jackets. One simple purpose. To prevent you getting wet. But they can’t, depending on your definition of wetness. To me dry is dry. My measure of dryness is whether a jersey exhibits the same level of dryness during or after a ride as when I put it on. Of course, as  method, that’s patently unfair. A jersey will get damp relative to how fast you’re going and/or what the temperature is. And that’s pretty much my point. if any jersey can get damp then sticking a jacket over the top of it ain’t going to help.

The rain jacket is simply a sub category of rain wear. An ever burgeoning collection of things to use when the weather is foul. The Velominati rules are clear; “harden the **** up” and “if you are out in bad weather then you are a badass, period.” Those things are clearly true. And it is right that we should stick to them. But that doesn’t mean we can’t offer ourselves some protection along the way. Indeed, challenging the weather Gods whilst laughing in their faces with our technical apparel is the very definition of noble pursuit.

There are a number of very different solutions where rain wear is concerned. One approach is to maximise protection and to make sure nothing gets in. Another is to allow water in but use it to your advantage. So, there’s a fragile coexistence between the favoured commuter option such as the Altura Night Vision Evo and the racier options such as the Castelli Gabba and Rapha Pro Team Soft-shell. They have their advantages and their disadvantages.

A bin bag is waterproof. Try it. You put your mostly empty soup can in there. Soup runs out. It stays inside of the bag. There’s no way out. No permeability. Marathon runners wear bin bags at the start of races because they are disposable. They keep the rain out. To an extent, being utterly impermeable, they keep heat in too. But they also trap moisture. Cycling, even at moderate pace, produces heat and quite a large amount of moisture. Bin bags would work. For a while you’d be dry. Then you’d be wet. Then you’d be cold. Then you’d sit at the side of the road with a puncture and begin to cry……..

I should say, at this point, that I am a racer second and a commuter first. A big distance 365 day commuter. Well, that last statement isn’t quite true. They give me weekends off. Hell, I don’t go in that often on Fridays, pretending….um, preferring instead to work from home. But it’s near as dammit 40 miles a day most days so you get the overall picture. Rain or shine. Sleet or snow. I’ve worn loads of jackets over the years. I feel I’m qualified. Sometimes I wear a Gabba and get wet. A few times I wore the Rapha Pro Team softshell and got utterly cold (sorry Rapha). The Rapha rain jacket was a good one but commands a hefty premium. The Night Vision is cheap and really visible. It’s also like wearing a luminscent bin bag with a nice meshy bit inside. The best one yet is the Rapha Hardshell. That’s great in November, not all that useful in April.

Getting the balance right between a material that can protect you and one which is breathable is cycling’s holy grail. Once upon a time W L Gore and Associates came up with a magical material. They weren’t necessarily first. But they got on with it. So, in 1969 they patented a breathable, lightweight, waterproof fabric called Gore Tex. And waterproof kit was born. Theirs was patented with the brand name GoreTex but there are a number of different approaches out there to the same problem. Let water vapour out. Don’t let water in. The science is techy. The reality is everyday.

Ignoring items such as the Gabba this review is about a specific rain jacket. The Madison Apex Race jacket isn’t made out of goretex. It’s made out of a proprietary 2.5 layer fabric. Madison claim a waterproof rating of 15,000mm and breathability of 15,000g/m^2 for both layers. I have no idea what this means. But I do know that it’s ballpark similar to jackets made from eVent and goretex. Which is nice.

So, the Holy Grail. What feels nice, works well (enough) and doesn’t break the bank is a hard ask. So that’s where the Madison jacket comes in. RRP is around £99. Shop around and you’ll get it for less. In fact there are some on eBay for less again. Be wary of sellers like that. I got mine from Paul Milne cycles and they were excellent.

There is no doubt that this jacket is waterproof. A recent torrential rain storm proved that. There is no doubt that it’s breathable. It’s a 2.5 layer fabric. It would be going back if it could not meet that claim. The question for me is whether it can compete with the seasoned alternatives out there. Can it achieve that balance?
I’m of the view that it can. There are little flourishes which help it breathe. Two big arm zip vents to allow the air out when working hard. And, even if open when raining they cover themselves slightly so as to continue their venting. There are two little zips on the sleeve as well to do the same job and they operate in the same way. The zips are quite easy to operate “on the fly” which is essential for gloved hands at this time of year. There’s a decent amount of reflective as you can see from the photos below. A nice little touch is the reflective cuffs which aid visibility to passing motorists when you’re trying to signal. 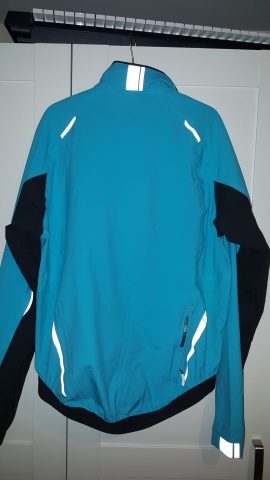 There’s a nice little rear pocket as well. As you can see it’s storm sealed. So useful for your phone. It’s not perfect. It’s possibly a little small and being offset can feel slightly odd. But it’s at least as good as other jackets. 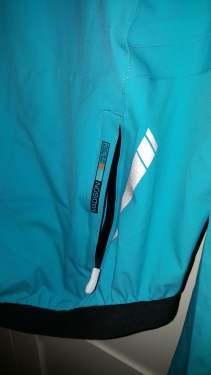 The main zip at the front is also storm sealed. Nothing gets through there. And the collar is nicely high, correctly sized and fleece lined. It’s all good.

The fit is racy. That is to say if you get the right size then it will form fit. I opted for a large on a 41″ chest and have enough room for a jersey or base layer underneath. That’s more than enough and turns a rain jacket into a pretty effective softshell. There is absolutely no flapping at speed. The waistband is excellent. There’s a decent drop tail at the back. The cuffs are sized correctly. It all works. That’s no real surprise. It was designed with input from the Madison Genesis race team. They know what they want. And generally what they want translates well to use by us punters. Arguably some other Madison jackets might suit you better as a commuter or a MTB’er. (See the Madison Addict for example). But the base tech is all fairly similar and should perform in the same way.

The Holy Grail? No. For me that would be something that you never ever cause any condensation in at all. It’s probably impossible, certainly when you want it to be slightly warm at the same time. But it’s not a compromise. I like the Gabba, it works. But it is a compromise. A reaction to the fact that it’s difficult to create a jacket which trades off protection and breathability. For my purposes, given I’m not on the Paris Roubaix on my commute, this works better. Indeed, of the jackets I’ve owned it feels like the one that achieves the balance the best. At half the price of the Rapha equivalent, given the extra technical flourishes, it may yet be the best jacket ever made…………..