This won’t be a long piece because it’s actually quite hard to write a saddle review. You can outline the specs and then tell people whether it fitted you. Whether it will fit them is debatable and down to a combination of factors. But, I should say, your local Fizik dealer should be able to lend you a test saddle so if you did fancy giving this saddle a whirl then you don’t have to put money on a potential failure.

Naturally, mine is green. This is the Cannondale Team Edition so, clearly, it more or less matches the paintwork on my Supersix for that is also green and, as such, my OCD is suitably protected.

The Aliante has been around for a few years now. It’s from Fizik’s “spine concept” range. The Aliante falls into the Bull category which is for those with a rigid spine. Or, less flexible if you will. Or, like me, getting on a bit. It’s a fairly round shaped saddle which is in stark contrast to the much flatter Arione. The length of this particular saddle is 275mm and it’s 140mm wide. In terms of width I’d guess you could call that in the middle of saddles generally though in the Fizik spine concept range it’s the widest.

There have been some changes from the previous edition Aliante. I always quite liked that saddle but I broke the nose on one of them (plastic bit underneath) and never really found my way back. And since I’ve been without a proper racing bike for a while a performance saddle was never really on my radar. Enter the new Aliante R3. It’s the model up from the base model, probably. Well, above it are the R1 and 00 models with their fancy carbon rails and obvious lightness. Below it is the R5 which is a tad heavier. There’s also an R7 as well, though I’m never particularly clear on whether that’s intended to be part of the range or is just an OEM model that’s escaped into the marketplace (essentially it’s similarly weighted to the R5 but with magnesium rails). There’s also the VX variation with their scooped out centre channels. 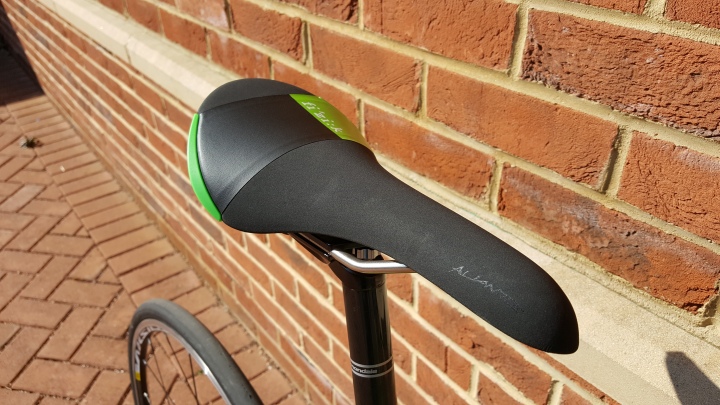 You can see in the above picture that the saddle is particularly curved but also has a quite pronounced long nose. 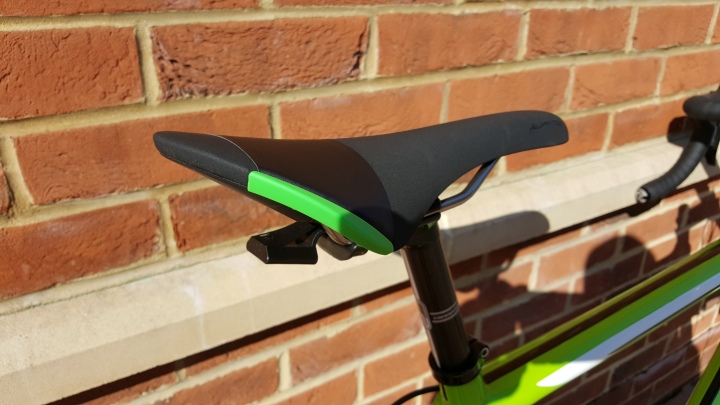 The rear of the saddle kicks up and the nose droops away very slightly. When redesigning this model they retained the curve hull section but apparently, in all other respects, told the designer to make it look like an Arione. Apparently people were still riding the Arione when they shouldn’t have because it looked so good. So, in came a longer nose section and the cut out rear of the old model was discarded. I have to say, I have no idea what that cut out was ever meant to achieve. Fizik claim that users of the old Aliante should feel no difference when using the new one. We’ll see…….The other thing is, for all their efforts, it looks like an Aliante and doesn’t really look like an Arione at all. Anyway, it had been around a while and was due a design update. 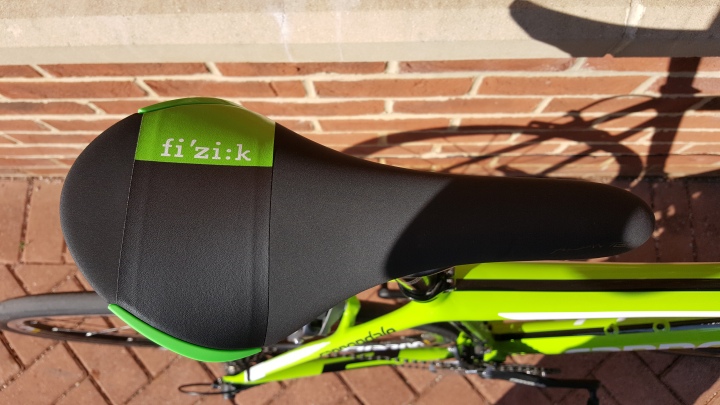 If you don’t like the green tinged side bars then you can swap them out to black or white. Those spares are included in the box. Simply undo the screws underneath and swap in one of the supplied alternatives. Does it have anything to do with performance? Nope. What it does is to protect the side of the saddle from scuff marks. So if you drop the bike against a wall then that plastic side strip should a) stand up better to impact in the first place and b) be easy to replace. I’m not clear, if you wanted replace some scuffed up green ones, whether spares are easy to buy or source. But it’s nice to have the option to swap them out in case of damage.

Around the rear the Fizik ICS clip is very much still present. So you can remove the clip and install a Fizik ICS saddle bag or rear light. Not at the same time of course. The bags have had an aesthetic overhaul for 2016 but the oft criticised connecting arm appears to be much the same (there were reports of it snapping though I’d never had such an issue).

I struggle with saddles generally. It’s why I have two Charge Spoons which are about the cheapest saddles you can buy. For me they work. I also liked the Brooks Cambium C15. But it had a tendency to abrade my bib shorts and that’s a big no no. So, until the Supersix arrived, I’ve been off the performance market, as it were and happy with the Spoons. They’re ok. Not the last word in comfort but for £20 you can’t really go wrong with them. And now I’ve put 100 miles or so  into the R3 what did I think? Is it an aesthetic compromise or a generally good saddle?

Well, you know what, I really like it. It’s as comfortable a saddle as I’ve ever sat on. Better than the Spoons and I’d say that I’m 99% of the way there with it. I don’t notice that I’m sitting on it, I don’t bounce around changing positions and it seems to work with me rather than against me. Isn’t that about all you can really hope for in a saddle? Will it work for you? No idea at all. I’m not recommending you rush out and buy one. Unless you like the original of course. Despite Fizik’s claims that no one will know the difference I don’t agree. For me it feels like a better saddle. It has the same rounded shape, the nose works better and the new microfibre top seems that bit more grippy and secure.

It’s not a cheap saddle. But then that’s performance saddles for you. If you’ve got a cheap one and it works, stick with it. But if you fancy an upgrade then it’s aesthetically pleasing (loads of colour combinations are available), lightweight and comfortable. Just make sure you use the yellow test saddle from your dealer before you buy one.