Fulcrum. It’s a noun.It’s the point against which a lever is placed to get a purchase, or on which it turns or is supported. Hang on, that can’t be right, you’d not name a company after that. How about, a thing that plays a central or essential role in an activity, event, or situation. Better. That sounds like what they were going for. Wheels meet that criteria.

According to their website Fulcrum (established in 2004) was founded “based on the idea of three aerospace engineers who are passionate about bicycles. The strong points of this young company include the use of unique patents, ongoing technological research, and the attractive and young-spirited design.” Nice. But we know different, don’t we? Fulcrum is owned by, and is a subsidiary brand of, Campagnolo. They don’t really shout about it, it’s like a dirty little secret. What’s it all really about? Well some have referred to Campagnolo’s desire to not pollute the brand with the provision of Shimano compatible wheelsets. Others say that it’s more about the owners of Shimano/SRAM based bikes not wanting to have Campag wheels on their bikes. Perhaps a little of both. It’s a bit confusing as Fulcrum wheels are available in both Shimano/SRAM and Campag flavours. And, today, Campag’s wheel range is the same. Clear as mud. Anyway, that’s your potted history.

Fulcrum provide wheels for the entire spread of budget and for a multitude of disciplines. Their naming conventions aren’t awfully transparent but, broadly, the aluminium clinchers range from 7 (at the bottom) to Zero (at the top). Their more exotic offerings are called things like Speed and Red. Red being, of course, the fastest colour after green 😉 There’s a carbon version of this wheel as well, the Racing Quattro Carbon (natch).

The Quattro sit towards the bottom of the range. You might even call them budget.I’ve read that this Quattro slips in between the 3 and the 5. Numerically that makes sense. But I don’t agree that it’s true, not quite.

And while the number 4 is a pretty mundane thing it’s fair to say that the Italian for it, at least in the English speaking world, is far from it. Quattro adorns the fastest of the Audi ranges and is steeped in history. Mind, it was also the name of a failed soft drink from Coca Cola in the early 80’s. And what is it about Italian? We get all misty eyed about Quattro, Cinquecento. Meanwhile the Italian’s are saying 4 and 500. Do they have that emotional attachment? I suspect not. The emotionalisation of Italian numbers is a marketing masterstroke. Quattro. Just say it.

The Racing Quattro was introduced to Fulcrum’s range in 2012. It’s been a fairly static presence in Fulcrum’s range but, last year, was updated to the Racing Quattro LG. Fulcrum’s “budget” offerings, that is to say the 7, 5 and Quattro all now come in LG flavour. LG is short for large, I think. Essentially the formerly narrow (ish) rims have been increased in width. So where they were 15mm internal they’ve now grown to 17mm. It may not sound a lot and the reality is that it is not. But it’s a step change to a better world of better shaped tyres. It’s not the widest of rims and it’s possible that the LG moniker is not ultimately deserved, but it’s a start.

So, Quattro. The thing is, the 5 is lighter. So it’s pretty hard to say that the “4” is better and that it slots between the 5 and 3. No, the Quattro is a bit of a misnomer in my view. Consider it instead the Racing 5 “Aero” LG and you get an idea of what it is.

The Racing 5’s are a pretty decent and light wheel, coming in at around 1658g. The Quattro are a little heavier and come in at around 1725g. Lighter wheels are available for the same or less money. Heavier wheels are available for more money. The Quattro aren’t particularly light, you might even call them particularly “average.” But they are, arguably, cheap, or, better still, good value. £184 at Wiggle currently or, if you have British Cycling discount, knock another 10% off that price at Chain Reaction, a shade under £170.

Let’s have a look at what you get for that. 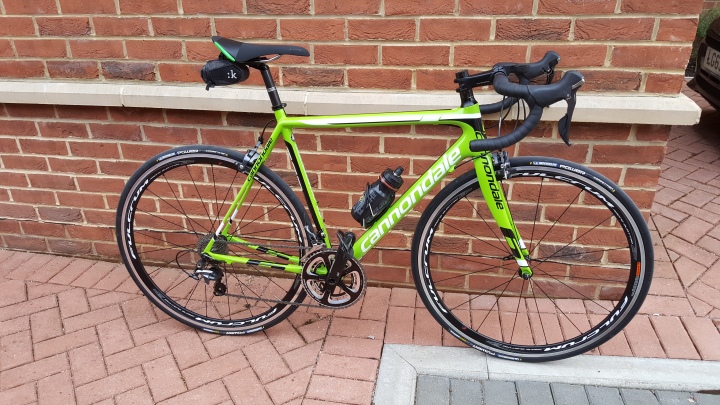 What you get is a fairly nice looking wheel actually. The stickers aren’t that great close up but you can take them off, if you really want to.

As I’ve stated earlier the width has increased to 17mm internally. The outer rim width is 23.2 mm. The main feature of the Quattro, quite clearly, is their depth. The rims are 35mm deep. Let’s call it semi aero? By contrast the Fulcrum 5 has rims of 24.5 and 27.5mm (front and rear) respectively. So, it’s a big jump on the front wheel, less so on the back. There has been a trend towards the deeper rim. Whereas 35mm would once have been considered deep it’s just deeper now. There’s a sweet spot apparently, 40mm claimed by some, but much depends on the use you’re putting your wheels to.

There are 16 aero bladed spokes on the front wheel and 21 on the rear. Odd number. Weird. Fulcrum utilise 2:1 technology so there are 7 spokes on the non drive side and 14 on the drive side. Fulcrum claim that this equalises forces and provides rigidity when you’re pedalling. Certainly my experiences in mashing the pedals uphill (and my weight) were that there was no discernible flex.

The hubs are pretty basic looking affairs. Actually blank with a rather cheap looking sticker. Again, it can be removed. 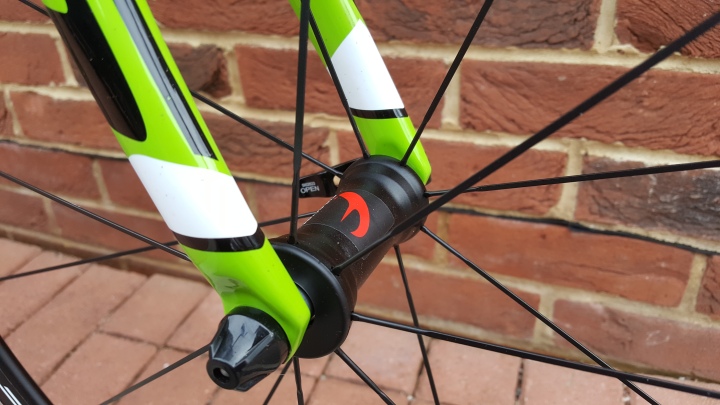 Here’s a close up of the actual rim. The graphics are actually quite nice. Much depends on whether you like shouty graphics or not. I think they work well here. I’ve avoided removing them for now but it might give a cleaner look. 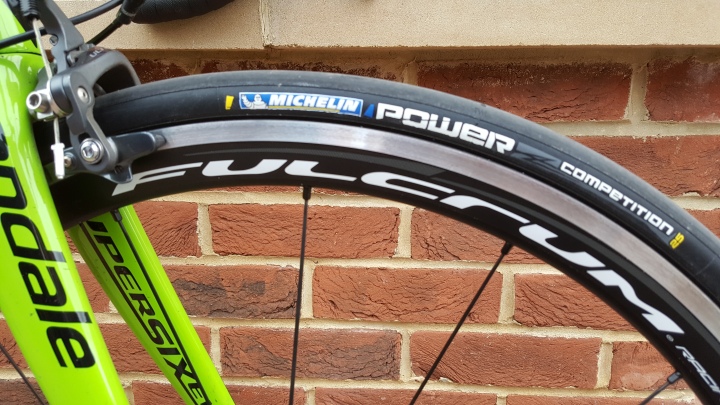 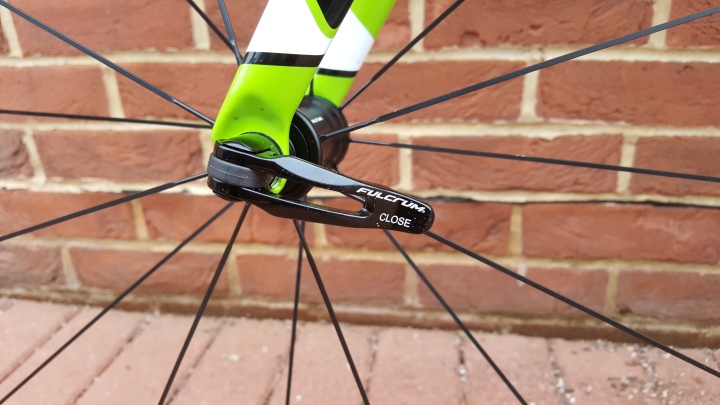 So, 35mm height. It’s not just a number, Fulcrum say, instead “Developed to strike the perfect balance between aerodynamic efficiency, handling and lightness, the 35mm rim profile increases torsional and lateral stiffness compared with a conventional profile, for improved high speed stability.”

Reading between the lines Fulcrum aren’t really selling the aero dream here. It’s a bit of everything. Jack of all trades, master of none?

So, here’s my thought process, laid bare. There were Aksium’s on there. They were good wheels. Nice wheels. Reasonably light, spun well, nice ride. They even looked pretty good. I decided to “upgrade.” But, hang on I hear you say, this isn’t an upgrade. It’s a sideways step, at best a marginal gain. And I agree. But, the thing is, I don’t know yet what I want this Six to wear permanently, the choice is bewildering. Cheap carbon? Expensive clinchers with narrow rims? Handbuilts? There’s a load of choice and I am undecided. So these are a stop gap.

But, you know what, quite a nice one as it transpires. It’s quite difficult to get a sense of how much better or worse things are without a point of reference. And, sorry, I removed the control as well by replacing the Schwalbe One tyres that I had on the Aksium with the new Michelin Power tyres which claim a much lower rolling resistance. So getting to the truth of the situation is a tricky one.

I haven’t had the best week either. Bit tired. One day I lacked lung capacity, the next day that was all ok but the lactic was clearly in the legs. And whatever I say will be anecdote. So, the thing is, a few weeks back I set one of my faster commutes home on the Six. Not the fastest, some way off that fitness yet, but creditable. It took all I had. So, not feeling it, I set out to see how much faster the bike was with the new wheels and tyres. Result? Tad slower. 20 seconds slower than the 53 minutes, 25 seconds I’d put in a few weeks earlier.

That seems fairly clear then. Slower. End of review. Mistake. Well, it’s not quite the case. There are lots of traffic variables on my route, different weather, different things. And, honestly, I wasn’t feeling it. But the overwhelming sensation I got was that the new combo was much, and I mean much, easier to maintain higher speeds for longer. Eventually I got a bit tired and backed off, but once I’d recovered getting back to that speed was easy, maintaining it was easier. I’m actually fairly convinced, so far, that these might be a very good budget aero option. Climbing on them is fine, they present no weight disadvantage over my old wheels. Comfort is excellent with 25c running at 110 psi. The Six still glides. Handling is a little more assured which I ascribe to the wider rim. The bearings are smooth and completely silent. There’s none of that old school early warning system clickiness that you either loved or hated on the older Fulcrum models. No one will hear you coming.

And, in the rides subsequent to the above, I concentrated on some KOM’s and knocked out several on the first go, on one of them holding a respectable (for me) 29mph average over a quarter mile section. Thing is, I think they, and I, could have gone even faster.

Budget wheels are that. Budget. When these wear out there’s nothing to be gained in replacing a rim. It will cost as much as new pair. Ditto the hubs. I should add that the hubs are of the sealed cartridge type and replacing them should be a straightforward affair. They’re only about £15 as well, which is a bonus. If you REALLY want to you can actually buy ceramic bearing kits for these, though it’s difficult to see how that could be justified. These won’t be used in the wet because I don’t use the Six in the wet. They should last an age. A mate of mine has just replaced a pair of Fulcrum 7’s on his bike. It was previously my bike. Those wheels were 8 years old. The rim was worn but they were still true. Fulcrum do have a good reputation for building solid wheels that last. It may be a good idea to source some replacement spokes when you buy the wheels to ensure that, if you do snap one, there are no delays waiting for parts. And, bear in mind, with this low spoke construction, that it may well be difficult to ride home if you do suffer an issue. But those are mostly budget/low spoke specific problems and not necessarily unique to Fulcrum.

So, consider this an intro. So far these seem to be very good. They are absolutely true and appear completely round. They’re sufficiently light, for now, and don’t hold me back on the hills. They appear to fly on the flat. They look good. They were cheap. As stop gaps go they will absolutely do until that special thing comes along. What that is I don’t know yet. I still keep looking out for it. I wonder though how special it needs to be given how good these are. Mind, the Carbon version keep whispering to me. Deeper, wider, lighter and sexier. Stop gap not only stopped, closed and sealed.