So, my wife really wanted to get in the game. This is, frankly, a scary prospect for a number of reasons. First, look, this business can be dangerous, it’s hell out there and notwithstanding her life insurance policy I really would miss her and would have to have at least some of the kids adopted if she died. But, worse, she now knows how much things cost and has an interest in them. So, this was £20 in Lidl won’t fly. And eventually she’ll aspire to Assos or Castelli and much pain lies that way….. Fortunately for me she’s been super pleased with her Lusso kit so we’re ok for now. I just hope she never starts reading cycling magazines. Or websites, full of weirdos like me.

I’m really looking forward to her getting into it though. She wants to commute as well and, in a timely manner, Bridgend Council have just built a rather lovely new cycle path which will provide safety for at least some of the way. Her commute will only be 6 miles each way but I really hope she gets into it. My eldest has been using this bike as well as he’s not far off his mum’s height. But a new bike for him also beckons. He quite fancies cyclocross as well, and mountain biking. Dear God.

Anyway, for Christmas, after a massive amount of research I took the plunge and got her a Zenium L from Chain Reaction Cycles. I’d considered every damn model out there, didn’t want to spend too much but was conscious of the fact that N+1 or even N(upgrade) takes hold very quickly. So, I set myself the minimum entry level of Tiagra (10 speed) or Apex. I missed out on a few eBay deals, ummed about some discount Boardmans and then this showed up.£699 down from £999 then 10% off for British Cycling members. Delivered on Xmas Eve, under the tree on Xmas day.

Sadly, for about 4 months it pretty much sat in the garage. When you’re starting off the last thing you need it to be put off by rain, wind and cold. It’s fine for me, I’m hardened to it and my N+1 means I have other bikes to fall back on. But not her. So she’s only recently been able to test it out. Before we get to that let me tell you a bit about it.

Vitus are Chain Reaction Cycles in house brand. So they cut out the middleman and, in theory, you should get more bang for your money. And in this respect that is certainly true. It’s an alloy frame mated with a carbon fork, Shimano 105 and Racing 7 wheels. The original rrp was £999 but we were lucky. It was sale time. Luckier again in fact, as I used paypal’s 0% option to spread the balance (£629 after BC discount) over 12 months.

The alloy market is very crowded indeed. Root around at the bottom and you’ll end up with Shimano Claris, perhaps Sora. Fine groupsets but they will limit your climbing (because of the range of gears they offer) and will almost certainly prohibit cheap upgrading. Move a little higher and the SRAM Apex and Sora/Tiagra start to appear. Move up again and you start to get into the realms of Shimano 105 and SRAM Rival. I’m ignoring Campagnolo here as, by and large, they’ve pretty much disappeared as OEM kit on most bikes now. Move up again and things get more complicated, in comes carbon but the kit gets downgraded as a result of the cost. The truth is that £999 for an alloy bike might be considered at the upper echelon. And it’s alloy. The thing is, as Cannondale are clearly demonstrating at the moment, there’s a lot of life left in alloy yet.

What makes this different? Well, for a start, the spec. It’s very easy to make grand claims about bikes and their components and they don’t always stand up to scrutiny. Indeed, I’ve seen manufacturers claim a bike is equipped with 105 when only the shifters and chain were so. But this bike is equipped with a full Shimano 105 11 speed 5800 groupset. Take some time to consider that, a groupset that pretty much retails for £300. There are no shortcuts here, brakes and chainset (two of the areas often skimped on) are 105. And 105 is brilliant. Sure, you can prefer SRAM, choose Campag, you can justify why Dura Ace is as it is. But 105 is a superb groupset and you don’t get where you are today by producing rubbish.

And because it’s 105 11 speed there’s a wider range of gearing and better climbing gears. Not the last word perhaps, the cassette being “only” a 11-28 with a compact 50-34 up front. But good enough. Some might argue that a 30t cog on the back would be better for a ladies bike. I wouldn’t count myself amongst them. A 30t cog is related to fitness, not gender.

That carbon fork is better than you’d usually expect as well. Very often that description is given to the carbon legged, alloy steerer versions. But, no, this one is full carbon, saving weight. Indeed, the overall weight of the 54 version is a fairly lightweight 8.86kg. This 52cm version a little lighter. Look, it’s no CAAD12, but it’s only 0.5kg away. And that’s actually really impressive. If we accept that some of that is tyres and finishing kit then this is actually a reasonably lightweight alloy frame.

It’s a beefy and rather racy looking affair. It’s not as thin as that of my Supersix but matches well with the rest of the bike. While 25c tyres are standard I suspect it may well be possible to sneak some 28c in there if need be. There are no mudguard or rack options on this bike so it may not make for the best commuter out there. It’s one for spring to autumn perhaps. But it’ll do for now.

There are some nice touches on the frame including internally routed rear brake cable. All of the cables are provided by Jagwire and there are a load of inline adjusters present. That’s pretty much obligatory given how tricky 105 front mechs can be to set up. It arrived in a massive box that you could probably move into. Once the handlebars were on I checked out the build and every single item was absolutely spot on. 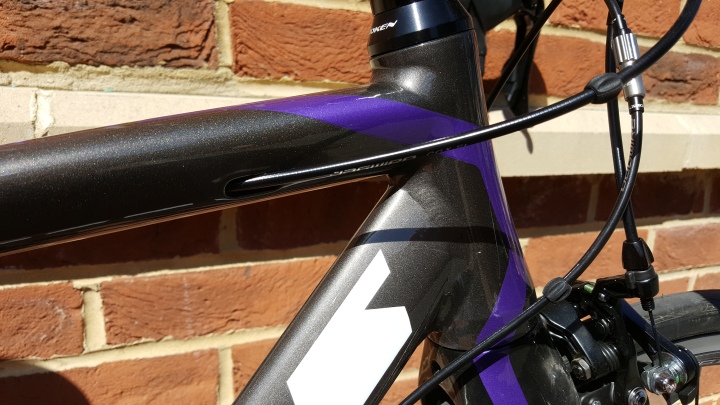 The headtube is a pretty stocky affair but the branding is nice. 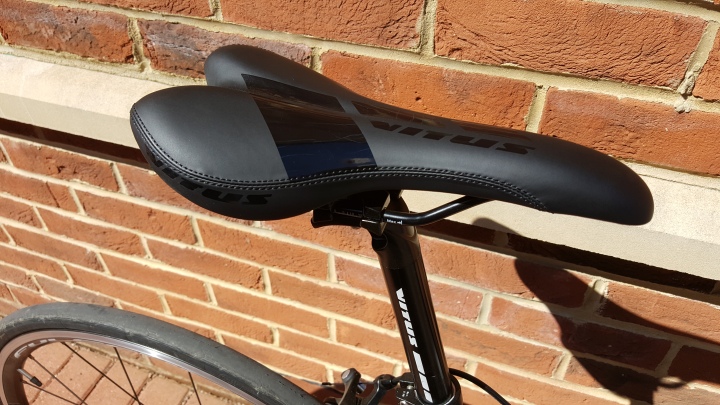 And that might be my only criticism as a whole. Geometry is a very personal thing and female specific frames are, arguably, not always necessary. Indeed, the geometry of this is virtually identical to the equivalent male model. Perhaps that’s the reason for the reduction? Not as many sales as anticipated? Have a google, it’s an interesting area. The brand manager for Specialized claims that such things are necessary, whilst Cervelo reject this claim. It’s hard to discern the truth but the crucial thing in all of this is bike fit. If the bike fits you will want to ride it. Stuff like saddles can be sorted later though, of course, saddle type can have a bearing on that initial fit. We got lucky here, the 52″ is a good fit for her and there’s tweaking that we can do if necessary.

So, the sum of the parts is clear. This is a very well specced bike indeed. At £629 it’s a steal, at £999 it’s competing against some stiff competition. So, is it any good?

Well, it’s not really for me to say. It’s for my wife and my son to comment on that. Both are better qualified to talk about it than me, though, saddle hoisted high, I have taken it on a few spins round the block. My experiences of it have been very positive. It’s suitably light to get up to speed quickly and feels pretty damped overall. Much of that has to do with the 25c tyres, squishy handlebar tape and nice padded saddle. It may be that the saddle has to change in due course but we’ll see.

It’s a bit small for me but everything works very well. In terms of overall feel it’s quite a plush bike. Not quite as direct feeling as my old Focus Variado alloy or Ritchey Road Logic but nicely damped overall. While I wouldn’t necessarily describe it as an endurance bike per se, there is a GT like feel to it in its current spec. The Gran Sport tyres are pretty good but I reckon a change to something like the Schwalbe One, Michelin Power or Conti GT would be a tidy upgrade. There’s not a lot of rocket science in making a bike. Provided you get the frame and forks right then hanging proven kit on it will get you a really great bike. That’s pretty much the story here. Good frame and fork, well executed, with kit that wouldn’t look out of place on a £1500 carbon bike.

So far my son has used it more extensively than my wife. On one of our long rides he reported it to be a “very nice bike” but that he preferred my flat bar bike “because of the position.” That’ll change, I may even manage to convince him that chamois pads in shorts really are necessary as he thinks that they are “just weird.” What was interesting was that despite me being a) considerably faster than him and b) on my Supersix, he had no issues with getting the bike up to speed or keeping it that way. Everything worked well and he reported the ride to be very good.

My wife’s experiences were similarly positive though she did report that “the bumpy bit” gave her a headache. I wondered whether comfort was an issue but realised that the bumpy bit was a section down the back lanes where you can experience what the Paris Roubaix might be like. There are no bikes capable of taming that though the Supersix does tend to show you its magic on such sections.

This is definitely a crowded market place. When something like the Planet X RT with Apex is being knocked out at £549 and the Merlin bikes look absolutely excellent then you need to perform. At £629 I’m fairly confident that this bike offers exceptional value. The frameset is good, the equipment first rate and the ride quality very tidy indeed. At £999 it faces much more difficult competition. Indeed, up at that price it’s against stuff like the Eastway Emitter with its full carbon frame and 105 (I’ve ignored female specific models here as I don’t believe that there’s an awful lot of female specifics on display). And if you want discs then something like the Giant Liv Avail 1/Defy Disc 1 looks like a cracker.

What will also be interesting is to see how the brands of Eastway, Vitus and Verenti mesh when the merger of Wiggle and CRC is complete. Vitus is a very good and often overlooked brand.

Anyway, so far, so positive. As she/he/we get more miles under our belts I will be sure to report back.

Oh, if you’re a bit taller than my wife, then it’s currently £599. At that price it’s pretty much an unequivocal recommendation.