Sorry, another one. They’re all the rage see and it does rain a lot. Indeed, I’m going to put together a round up and discuss the “death of the rain jacket” shortly. So, off the back of my recent Perfetto test, here’s another one. It’s a bit cheaper as well. Can it give the mighty scorpion a run for its money?

I’m actually a bit fed up of rain jerseys now. Not because they’re not any good, far from it. But I need to go out in the rain to test them. I’m fed up of rain……though, just as I’ve written this, we’ve had 2 days of mid twenties heat. Or Summer as they call it in Wales.

Corsa is, of course, Italian for race. When the Lusso Corsa arrived that’s immediately what I thought. It’s more race wear than endurance wear. Not that it won’t do both. But there’s a real lightness to this one. It’s more jersey than any of the others that describe themselves as such. And possibly a bit more versatile. It weighs (size large) a shade over 200g. For comparison the Castelli Perfetto comes in at 257g. That’s a quite substantial saving and gives you some idea of its stated intent and its potential versatility.

Lusso claim that this is an “aero-fit” garment or, to you and I, it’s a tight fit with no flappy bits. It’s also described as being windproof and waterproof, lightweight and breathable. It’s made from “Italian fabric.”

But what fabric? It appears to be our old friend Windtex as seen in Parentini’s Mossa but, this time, a much lighter version of it. As I’ve explained before Windtex is a waterproof membrane. This Windtex lite cuts down on a lot of the weight without sacrificing wet weather performance. It’s a versatile piece and could see you down to single figures (with the appropriate base layer). It’s not intended for wearing at really low temperatures.

Fit on this is excellent which contrasts starkly with my experience of the Castelli Perfetto. (though that may have been a one off). My Large is perfect on my 41″ chest but, crucially, it tapers less sharply into the waist. I measured the waist section at 34″ inches all round compared to the 30″ of the Perfetto. While it’s difficult to compare a brand/size I do feel that the Castelli tapered way too much from the starting point of a 41″ chest fit.

You’ll note that the arms are quite long. They terminate just above the elbow. The other great thing about the Corsa is that it’s part of Lusso’s nitelife range so when you get caught in car headlights this is what they see.

It’s remarkably effective and, of course, continues at the rear as well. Sticking an arm out to indicate works as a virtual indicator. Black is the only colour available.

Not all of the jersey is made from windtex. There are fabric parts which provide for greater breathability. You can make them out, I hope, in the picture below. So you have a small fabric section under the arm which then runs down the side of the jersey. Other than that everything is “enclosed.” It’s a good approach, rain is unlikely to make its way to those areas easily because they’re shielded by you. And while it stops short of a full vent it’s still effective in keeping the jersey breathable. 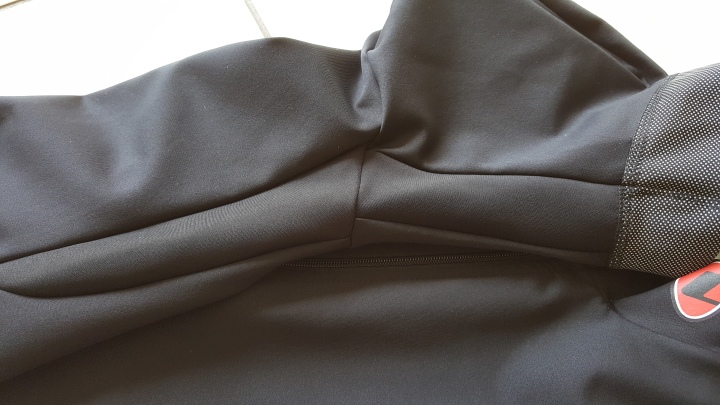 The collar is quite high and fairly generous. The Perfetto felt a bit tight in this area but the Corsa is a better cut on me. It’s good to see a zip garage present to ward off any chin rub.

Round the back and it’s all present and accounted for. There are three main pockets which don’t sag at all. The fourth waterproof zipped pocket is a decent size and will take a reasonably sized smartphone but probably not a phablet. Lusso have added a central reflective strip making this one of the better articles of clothing I’ve tested in relation to headlight visibility.

Taking a leaf out of the Gabba playbook the pockets have drain holes so any water that runs down your back will find its way out. Once again you can see the nitelife strip at the bottom. That strip has rubberised backing on both the waist and arms so there should be no issues keeping everything sitting where it should. 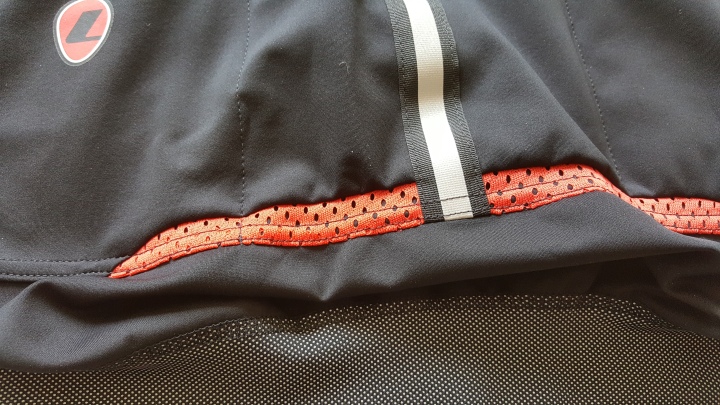 You can wear it how you like but it does work better with a base layer, so Lusso sent me the one that they recommended wearing with it. It’s a polypro material, specifically our old friend Dryarn and works extremely well even if it does have shades of Bennett from Commando about it. The sleeves are very thin elastic grippers and that works well because the length of the base layer sleeves is more or less identical to the sleeves of the jersey. So the arms on this grip you and the grippers on the jersey grip the gripper section. You don’t have to wear this one of course. If you don’t then you may just find the arms on your existing base layer not quite as long but it will still work perfectly well. I’d advise polypro rather than merino because it has better wicking properties in this setup. 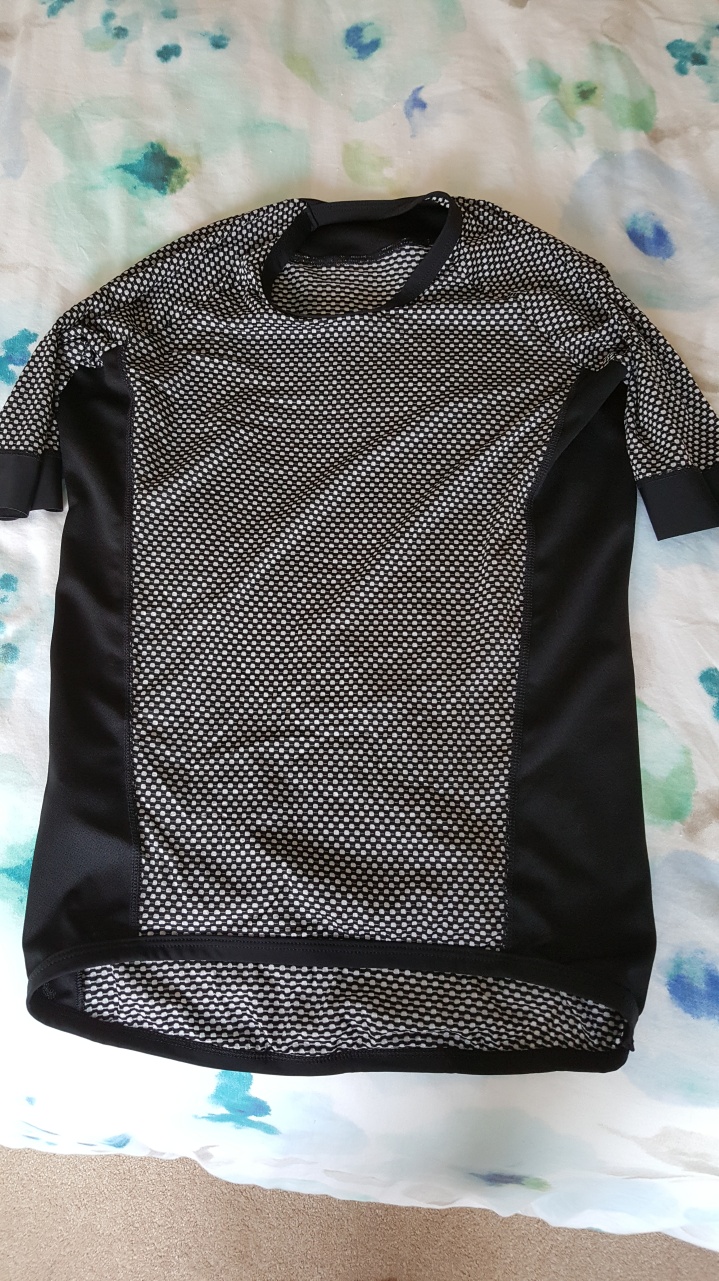 Obviously this is a short sleeve so won’t keep you totally warm in single figures or driving nasty rain. So, to extend your protection you can partner it with a pair of Lusso repel arm warmers. They’re made from the same material as the main jersey so you’re getting all round water protection. Like the jersey there’s a small fabric insert round the back for added breathability. I found the fit on these to be outstanding and, crucially, not too long.

In terms of the “bowl” test you can see just how waterproof the fabric is here. And once you eject the water there’s nothing really left on the membrane at all, testament to the DWR treatment.

None of this really matters though. All that’s important is whether it works. Well, I’m happy to report it does, and them some. It was rubbish here earlier in the week so I had a good opportunity to test it in the conditions it was designed for. It does what it says on the tin. Useable range for this is excellent. I had it on in monsoon conditions (think wet and humid/warm) and cooler damp ones. I never overheated and never got cold. Unlike the Perfetto I could happily move the zip down without my chest ejecting itself through the front. So whilst it lacks the clever back of the Perfetto it’s still very breathable when done up and if you really need to vent it’s easy to pull the zip down for a while. Indeed, it’s just like a proper jersey really though obviously a slightly different overall feel.

The drop tail is excellent. It’s not an additional piece as you’d see on the Gabba/Perfetto where you can tuck it inside if you want. It’s just a longer back. You can sit on it but I prefer to let it drape itself over the saddle. The pockets are good and I found getting stuff in and out a little easier than the Perfetto as well. I’ve no idea why though I suspect much is to do with the elasticity and construction of the material that runs along the top of the pockets.

A colleague remarked that it looked a bit like a seal skin. I think there’s some truth in that and like skin it’s both waterproof and breathable. Obviously anything intended to be waterproof and which attempts to deal with warmth or tempo riding will not be the last word in breathability but it did an excellent job and after a 2 1/2 hour ride (in alternating damp and downpour conditions) I was only slightly damp from my own sweat. The base layer was pretty dry as well indicating that the sweat had moved away from me and out through the jersey. Temperatures look to drop again next week so I can have a look at how this deals with the early morning 6-8 degrees in the rain. I don’t expect any issues and will check out how it works with varying weights of base layer.

In terms of washing there is a DWR treatment so don’t forget to wash it with non bio and re-treat when you need to. In my experience these treatments do last for quite a while. Unlike others windtex remains waterproof so while water may not bead as effectively it still won’t get in.

Top little jersey this and, frankly, good value at a rrp of £95. For virtually 4 season usability it’s a top wardrobe addition.

Click to buy the repel arm warmers (if you didn’t already!)