Happy 40th Birthday to Parentini. In terms of clothing manufacturers that makes them amongst one of the oldest I guess. So, 40 years ago Gianpaolo Parentini, working in the family factory, decided to move into technical cycling wear. The rest, as they say, is history. When you’ve been around 40 years you learn a thing or two.

Before I crack on it’s worth dealing with Parentini’s naming conventions for bibshorts. Generally speaking most of the top end shorts in their summer range have a “winterised” equivalent.

So, the top of the range (summer) Tiger.2 has a winter roubaix version. Ditto the Shark.2. In addition there’s a Shark.2 k-dry version with added water repellency. Possibly a bit confusing at first but quite a sensible convention actually. What’s good about this is that if you’ve found your summer “one” as it were then, added warmth aside, the winter version of it should provide a similar if not identical fit.

You can see the full set of summer bibs here and the winter ones here.

The Shark.2 that I’ve been testing sit just below the top of the range Tiger.2. There are a number of colours available which appear below. The RRP on these is £110. Given the premium end of the market they are pitched in that’s a) fairly reasonable in terms of this price point and b) they will need to be very good to justify that kind of price. 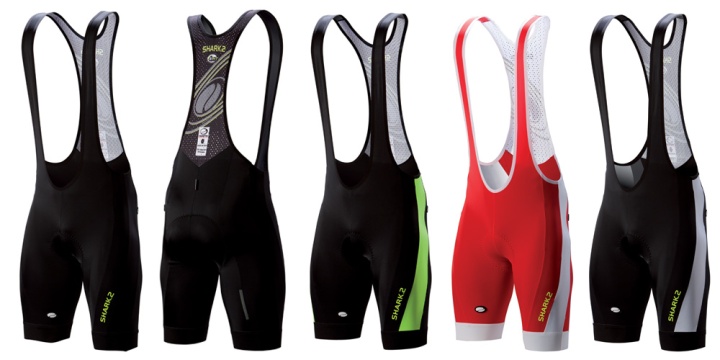 Essentially, the intent is that they face off against Assos, Rapha, Castelli etc. Not long ago that was pretty much it but it seems that there are new brands appearing every week with their own take on what a premium product is. Competition is pretty fierce for your hard earned cash. It can be a bit bewildering as well. Given the amount of stuff out there it’s very easy to fall back on what you know and default to the well known premium brands.

My personal view, and I’ve also been testing the new Assos S7 Equipe this week (review on those soon) is that Assos remain the benchmark against how others are judged. Whilst bib shorts are a very personal thing in terms of fit the truth is that Assos don’t make mistakes. They innovate and everything….just….works. When making comparisons therefore the bar is raised very high. In terms of rrp these are positioned against the Assos Neo Pro and Equipe (and come in cheaper than either). The Tiger.2 are, arguably, positioned against the Cento and Campionissimo (again coming in at less). I’m afraid I don’t have those on test but if they offer an exponential improvement then they should be quite special.

Let’s see what they’re like. The lycra of the Shark.2 is a 250g weight for that bit more compression, fit and durability. I’ve not taken a photo of them hanging up as their anatomic shaping means that there’s little that can be gleaned from a photo. 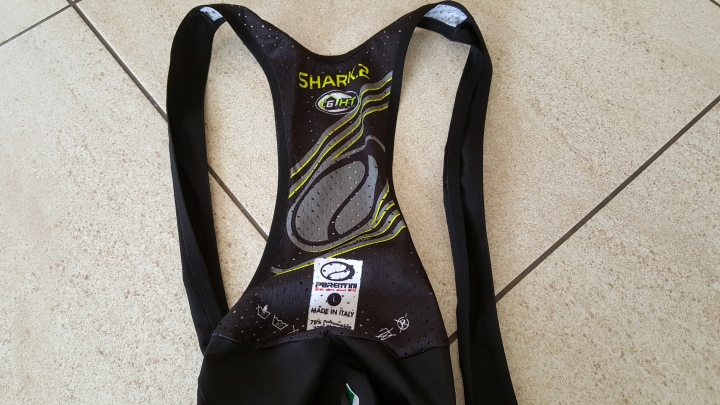 The first thing to discuss is probably the straps. The back section is a single piece which is then joined to the front section at the shoulders. The front section is continuous all the way from the shoulder right down to the bottom of the shorts. That means less panelling and less possibility of rubbing. The outer edge of the straps is heat bonded to the strap rather than stitched on and runs the entirety of the straps (inside and outside) and around the tummy section. It’s actually a labour intensive process and means less product produced per hour. But in the pursuit of comfort it matters very much to Parentini. Stitching, where it does exist, is first rate. It’s not flat lock but what there is is kept to the absolute minimum in terms of height and width. I’ve stated before that whilst flat lock is welcome I’ve never had an issue with “normal” stitching. And there are no issues here.

If you want to read more about the heat bonding technique click here.

In terms of fit I took a Large for my 35″ waist and 80kg frame. That compares pretty favourably to what I wear in Assos. The fit is quite compressive and that’s not a criticism, it’s how good long distance shorts should be. Similar to Assos the shoulder straps don’t sit entirely comfortably when you’re standing in the kitchen filling your bidon. But, on the bike, and after many many miles, you just cannot feel that they’re there. There are a load of different approaches to straps out there in terms of positioning. These are fairly traditional in that respect. They spring up from just outside mid tummy and go up and over your nipples. There’s been a move to offsetting straps further to the waist. I can’t say that I find any method any better or worse than the other so Parentini have just stuck with what has always worked well here.

So, how many miles have I done? I read the other day that commuting could not compare to sitting in the saddle for many hours. I disagree. The varied conditions I face every day (and the variety of bikes I use) helps me to determine what good kit is. Bad kit makes itself known pretty quickly. But I don’t just commute, I do loads more than that. So, last week, I put about 300 miles into these with a few rides of 3 hours plus. I washed them daily on a cool wash, dried them and used them the next day. We’ll come back to how they perform a little later.

There are two patterns of lycra incorporated into the short. The majority is “smooth” lycra and the side panels have a waffly effect. Parentini make absolutely no claims for aero performance of that section. That saves me telling them off for making such claims. The waffly lycra occupies two panels which come down from the waist. Again these panels are curved to pre shape the shorts into an anatomical shape. I guess it works. Laid out they don’t fall well. When on they fit perfectly. As a side note, depending on what colour you go for, the two waffle panels aren’t always present. The red shorts, for example, have one waffle panel in contrasting colour and one smooth lycra panel.

You’ll note the presence of the usual elasticated gripper here. It’s bonded onto the bottom of the shorts. The back of the gripper is entirely rubberised. 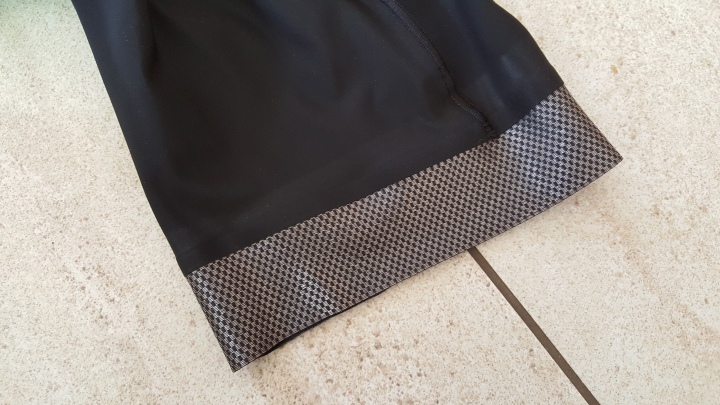 In use the grippers were pretty much invisible in terms of feel. Nothing moved around and you just can’t really feel that they are there. They are, like the rest of the short, compressive. But they disappear entirely when you’re on the bike. There’s never any need to tug them to get them to sit in a different place. If you do have Hoy like thighs you might find that the area where the gripper bonds to the main leg is slightly more compressive. But it’s simply a small visual matter rather than a comfort one.

There are two big reflective strips sewn into the seams at the back of the leg. Once again Parentini ensure that you can be seen.

The pad is once again Parentini’s own C6 HT elastic carbon pad (as seen in the K-Dry bibtights I tested a while back). It’s designed and produced entirely in house rather than being outsourced. It sits below the top of the range C6 Fluo pad. Well, all I’d say is this, that top of the range pad must be some pad indeed as I cannot imagine what improvements it brings. This is easily amongst the best pads I’ve sat on and you can happily spend hours in these shorts.

In terms of leg length I’d say there were a middle ground. Not quite as short as the Assos Mille (or dhb Aeron) but some way short of longer offerings such as the Lusso Pro and dhb Aeron Race. On my legs I still have some way to go until the knee which is something I personally prefer.

So, I’ve done some miles in these. I’ve also been playing around on different bikes and I’ve experimenting with saddles on the race bike. I’ve done a large amount of climbing and some long hours in the saddle. It’s been pretty warm as well so gauging breathability has been possible. I’ve never really had any real problems sweating in lycra shorts but these definitely have an airy feel to them as a result of the waffly side panels. It also appears that the pad itself is very breathable and I don’t get any sensation of dampness.

These are excellent both for the price and in terms of being a true performance short. The pad is outstanding which is absolutely the main thing that you want in a pair of shorts. That the rest of the package stacks up to what’s within is a bonus.

For a list of dealers click here. A few more have been recently added so if you want to know where to buy then drop an email to sales@zettadistribution.com. If you do have any queries drop a message in the comments and I’ll try my best to answer them.