You might recall that a while back I tested the world’s most expensive cycling jersey. It’s a quite beautiful thing and marks Assos’s halo product in their entry to the off road market. It’s also an expensive thing but, at the time of writing, is a mere £142 at Wiggle. That’s actually something of a bargain given that it includes a very versatile £60 summer base layer. I won my Rally jersey but I’m seriously contemplating getting a second one, in a different colour natch. It’s on price drop so when it hits £120 I might well do it. Sell the base layer on and get the world’s best jersey (depending on what you’re doing with it) for cheap.

Anyway, this review is about the little brother (or sister!) to the Rally jersey, the Cape Epic jersey. It’s named after the multi stage and very demanding MTB race. For details of that see my original review. It’s more than a little hardcore but really is epic.

This is a review of the men’s version so you might wonder why I’ve used a picture of Juliet Elliott, Assos brand ambassador, as the background to my piece. Well, there’s a good reason for that. The first is that Assos get producing kit for women. There’s an extensive range that mirrors the men’s collection and where a bespoke version is absent there’s a unisex item to fall back on. The off road section is entirely mirrored, limited though that range is.

But Juliet arguably represents a very different ethos at Assos which is a far cry from the very controversial manner in which they represented their products before. Assos Girl and Assos Man are very much still present. Assos Man still looks like he could cut steel with his pointed hands. But there’s been a shift away from what was some pretty dodgy stuff. Who can forget this reaction to a rather odd campaign. Ownership of the Assos brand has changed hands and with it comes a modern look and an honest shift away from the portrayal of women that once plagued the brand. Have a further read here.

It’s easy to change something. It’s easy to ignore the past. It’s actually pretty hard to front up. Perhaps being the new boy in charge Phil Duff can do that more easily. But kudos to Assos to facing up to these issues. Shrewd marketing perhaps. All publicity etc……. But I sense there’s more purpose to Assos now. Less rich boys club, more about the cycling. Cycling branding, an interesting thing, and perhaps a piece for the future.

So, the Cape Epic jersey. I guess we should start with a price. It’s £125 RRP which is mid premium. It’s been bouncing into many different price levels at Wiggle recently. If you’re platinum you save 17%. It’s been in the price drop section and Monday evening had reached £75 or thereabouts. Then, inexplicably, it got removed and put back on regular sale. I don’t know why that happens but I suspect they monitor my clicks and like to mess with me. I was thinking of getting the white one……………. though weirdly, if the Rally jersey stays in the price drop section it will soon be cheaper than its little brother. Something to keep an eye on.

Mine’s an XL on my 40.5 chest. I’ve been put on a milkshake diet as well so that’s going to shrink. This is a clingy design so even if I lose a bit of weight it will still fit perfectly. 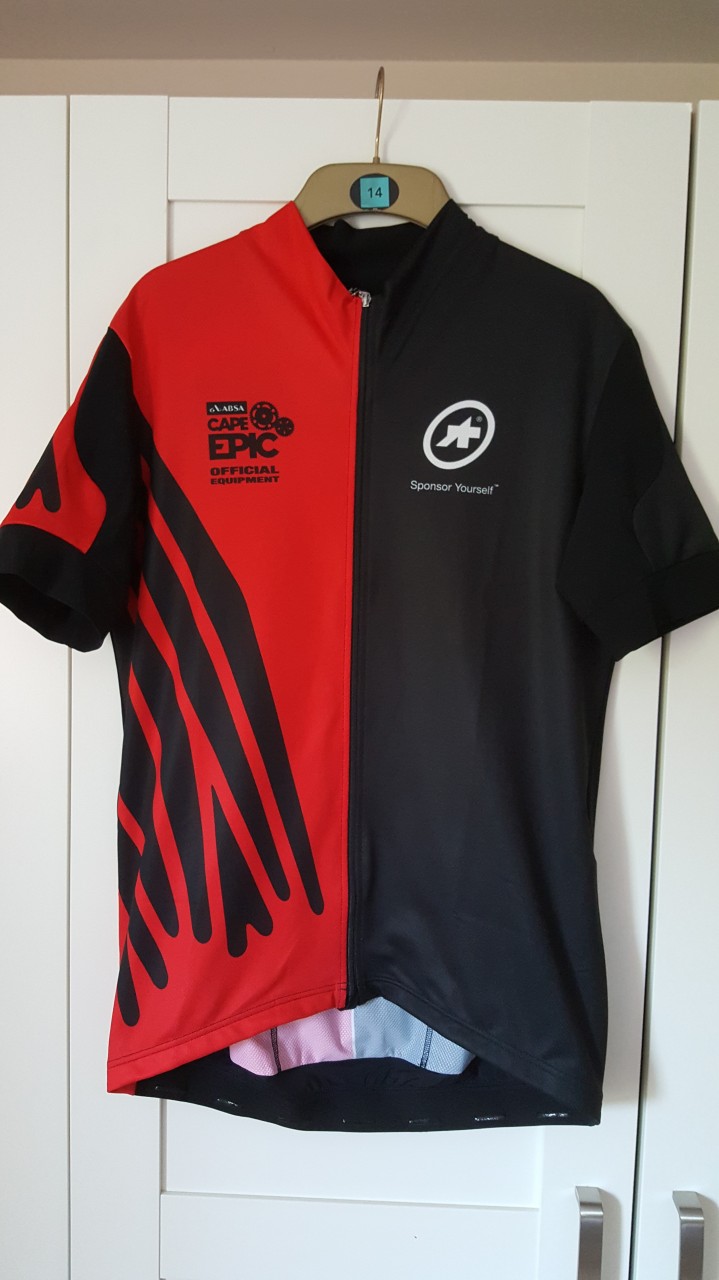 Assos have gone for an asymmetric front and rear with what I suppose is an African themed design. Asymmetry is present in quite a bit of Assos’s stuff now, particularly in sleeve colour design. It’s interesting. You’d think the Swiss would be all for regularity and precision. I like it as it’s a bit different. The material in use is, as usual, proprietary but generally speaking a polyester mix. The design is all sublimated. 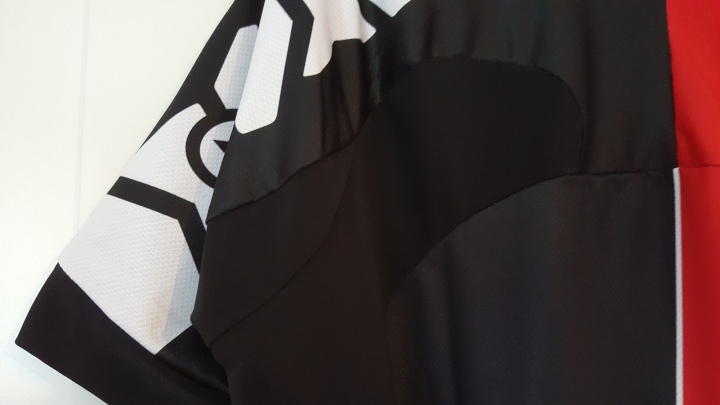 It’s not all mesh though. There are smoother, stretchier panels that run around the arm and onto the back. They also run down the side. They’re more breathable than the already really breathable main sections so they give you a bit more venting. That should come as little surprise given the intended use. Is it as effective as the mesh panel at the rear of the Rally jersey? No idea, check back when I’ve tested both at 30 degrees. Probably some time in 2020.

The arms terminate in that same smooth material. No elastic grippers inside and there don’t need to be. 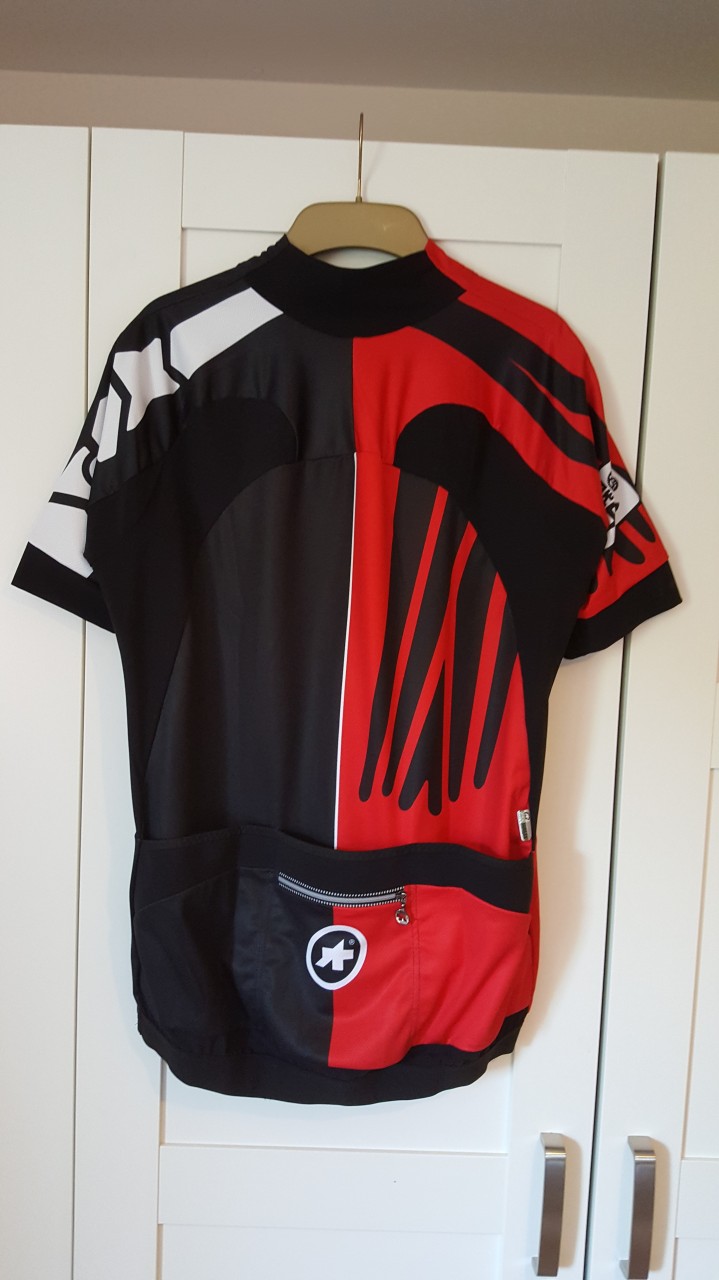 The back adds even more asymmetry by going for Assos’s now very trademark white pattern sleeve design to contrast against the Cape Epic design on the other side. There’s a wide elasticated gripper running round the bottom of the back. This isn’t replicated on the front which is good old fabric. As usual everything just works.

The pockets are great on this. There’s a wide elasticated band running along the top of them which means you can load these up for your, well, epic, with no risk of any sagging. There’s a central zipped pocket for valuable and, as you can see, it has some reflective trim. Useful for being seen on the road or the trails though some way short of that on the Rally jersey.

The construction is first rate. What else did you expect? And in use? Well, it’s naturally epic. I’ve been hooning around the gravel trails and bits of gnarlier (sorry) off road sections. And it’s been cool and breathable and never anything other than supremely comfy. Is it the equal of the Rally jersey? To be honest it’s certainly close. In terms of value it’ s definitely the winner. Though much depends on their relative pricing on any given day.

Thing is this is a damn good road jersey as well. That should come as no real surprise. XC is pretty much road orientated kit now anyway. There’s an argument that the rear is slightly overbuilt for truly hot days in the mountains on a road bike but I don’t really buy that. It’s not the coolest jersey, compared to something like the Isadore climber’s jersey, but these things are all very marginal.

So, yes, it’s pretty epic actually. It’s versatile, equally at home on the trails and the roads. It’s comfy. It’s durable. It’s pretty well priced depending on when you buy it. So it may not be the world’s most expensive jersey. But compared to its older brother it gives very little away. I’ve a few other pieces from Assos to review shortly including the Mille jersey and the Neo Pro and Equipe bibshorts.