I checked the rules again. Eyewear must be cycling specific. But that’s all that is required, it seems. Nothing about colour. In fact nothing about whether you need to wear sunglasses at all. Certainly nothing about matching. That’s an interesting omission in a set of rules obsessed with how we look. There is a singular truth about the Oakley Jawbreaker. They are cycle specific, of that there is not a shred of doubt.

My OCD demands that there is some synergy between my sunglasses and helmet. So, as you can see above, the Jawbreakers match(ed) my Kask Vertigo. They now match my Kask Protone. Indeed, my Protone is a little more green and blends all the better with the Oakleys. And somewhere in the middle ground of green there is my Supersix.

Picking out green elements is satisfying but ultimately a little limiting. If I were writing the rules then the colour of your glasses should go some way to matching your helmet. Black with black, white with white essentially. If you have bits of green in your glasses then the only options, it seems to me, are all black or black and green.

But I don’t write the rules. When I tried some different helmets the other day they were rejected on the grounds of comfort but, crucially, had I opted for them and their very non green nature they would have demanded that I change my sunglasses. That’s a piece of expenditure too far. The Protone stayed so my Jawbreakers, in this colourway, stay. I’ve done a very mini review of these before, but it was very mini and you may not have seen it. So consider this a long(er) term test.

Oakley supply the Jawbreaker with the usual hard case and a Cvndsh (sic) branded micro fibre cleaning case. The lens is what gives this variant its road prizm moniker. It’s red and is a very fetching thing.

The Oakley jawbreaker are apparently Oakley’s response to Mark Cavendish’s request for something that offers an unobstructed field of vision. He felt that his previous sunglasses, the excellent Jawbone and Radar, just didn’t cut it. He has a point. The Jawbone are great and switching out a lens is child’s play. But they are quite small and they can get a little foggy, though the vented ones are a little better in this regard. But peripheral vision is a tad limited. The Radar are better in terms of field of vision and the Radar Lock version make swapping out lenses as easy as that on the Jawbone. You can get away with wearing the Jawbones off the bike (if you have that self confidence). You can’t really get away with wearing the Radar. And you certainly cannot in any conceivable manner of taste or decorum wear the Jawbreaker down the pub. Just do not do it. You will look ridiculous. People will stare and you will be cast out as a fashion pariah.

For the Jawbreaker are feintly ridiculous. They are quite mammoth things. More ski google than cycling sunglasses. There’s a very large nod to Greg’s iconic Oakley Eyeshades here. They looked ridiculous back then, but it was the 80’s. And whilst 80’s retro chic is very much alive there’s no escaping just how in your face these are. If you like subtle the Jawbreakers are not for you.

The height of the whole shebang is considerable. But the coverage is immense. Unless you go completely bonk eyed you simply cannot see any part of the frame at all. I’ve read that some find that the side section (where the O’s sit) obscure their vision. I don’t experience that at all but we are all different. I find that I tend to move my head to look sideways and on those occasions where I cast a glance left or right I don’t find that the arms or side section get in the way. But I can see if you’re riding a crit and planning a sprint then casting your eye to the side telegraphs your proposed move far less. There is quite a lot of plastic off to the side so that is something to be aware of. I tried replicating this “flaw” earlier today and found that I had to move my eyes uncomfortably off centre to see the section off to the side. 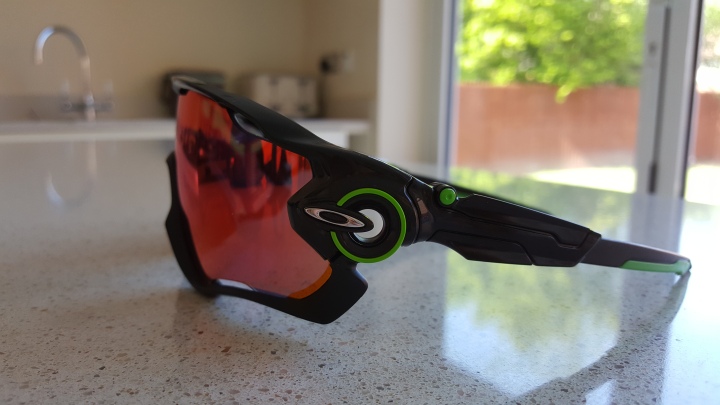 The real party piece of the jawbreaker is their deconstruction to allow lens swaps and I deal with each stage below.

Step one, you need to flick the nose grippers upwards. 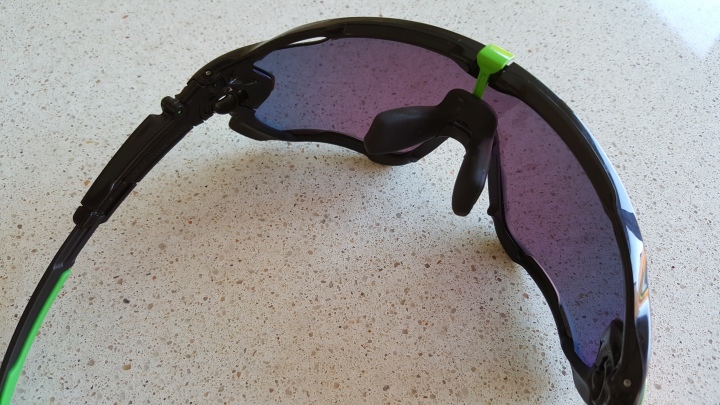 Step two, you then unhook the top clamp leaving the two parts of the frame free to separate. 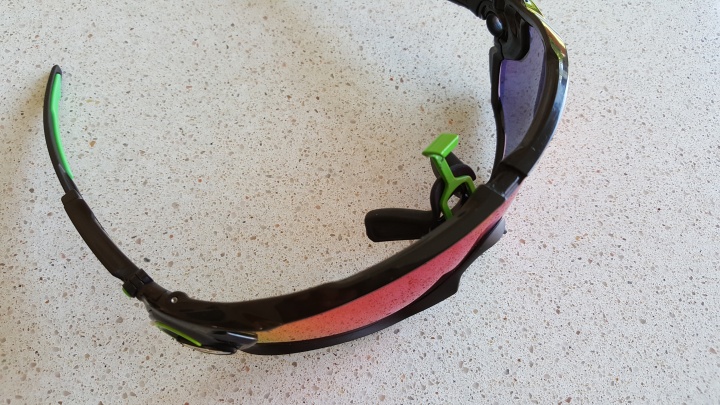 Step three, the jaw hinges away and you slide the lens out. 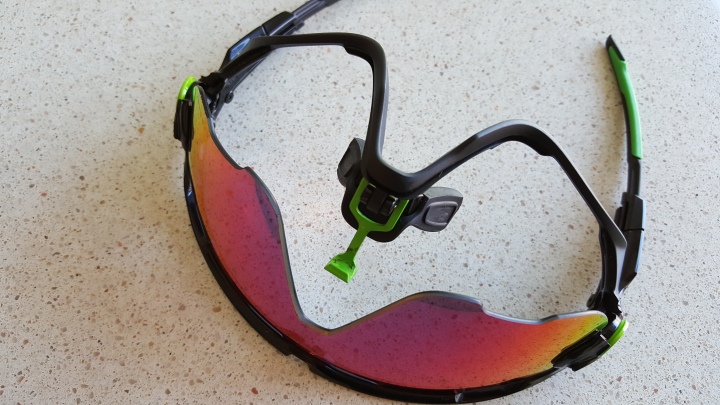 It’s a remarkably easy system. You’re then free to swap in whatever other lenses you want to. But, beware, they’re not cheap and the choice is actually quite limited. Most of them cost around £100. Given the price that you can pick up another pair of Jawbreakers, that’s not especially good value. And there’s more, the Prism road lens of the Jawbreaker offers a massive shift in optics from Oakley. You can see some of the difference promised in this comparison.

This begs the question. This version is the Prizm lens and it’s the clarity of the Prizm lens that is one of the real USP’s of the Jawbreaker. It’s fair to say that you may want to swap out to a different colour for different conditions. But the Prizm Road lens seems to me to be incapable of being anything other than spot on. I’ve used it in high sun and I’ve used it while it’s been hammering down (after being caught outside). It copes admirably with all conditions. If MTB is your discipline then there’s a Prizm Trail version with a little more light transmission and a greater ability to pick out features that might cause you to crash your bike. If you want an all rounder then there’s a transitions photochromic version available as well. There’s also a clear lens for winter or dark riding. So, Oakley cater for choice and if you want to choose then swapping lenses is a cinch. Clear lens aside, I’m just not all that convinced you’d ever need to.

There’s more adjustment to be had as well. One of the issues with the Radarlock, at least with Kask helmets, was that they didn’t work particularly well together. The straighter, flatter arms of the Jawbreaker appear to play more nicely with a wider range of helmets and work like a charm with Kask ones. You can also adjust the length of the arms by flipping up the lock and moving the arm to suit your preference. 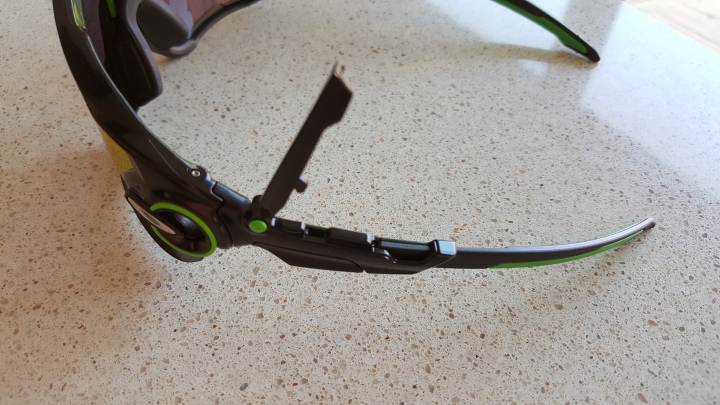 I’ve owned a lot of Oakleys and my OCD has seen me regularly swapping colours and models. But I do rate the Jawbreaker, in a cycle specific capacity, as being the best of them.

They are exceptional on the road and on a bright sunny day they filter all of the crap out. They’re actually surprisingly breezy as well, testament to the 6 main vents. They’re not perfect in this regard though. When climbing on a damp day they are prone to misting. I’ve read that they are more prone than other models. I’d disagree with that. They’re certainly less prone than a non vented Radarlock and I’d put them on par with the vented Radarlock. They’re considerably better than the vented Jawbones in my view.

It’s a lot of money to pay for sunglasses. The RRP of these is just shy of £200. Which is pretty ridiculous for a collection of bits of plastic. There’s little doubt that Oakley’s R&D makes investing in them worthwhile though. The thing is that RRP is not a very good guide to Oakley anymore and this version has been discounted pretty generously online. I think I paid around £105 for mine some months ago. Shop around and that’s do-able. If you fancy the non Cavendish road version that comes in white with the same road prizm lens and that’s currently under £100 at Wiggle (though out of stock for a week or so). You will need a white helmet though, clearly.

There are plenty of alternatives out there competing for your money. Rudy Project are always well regarded. If you want to rival the ridiculous look of the Jawbreaker then you can pay an awful lot more  and opt for one of the excellent Assos Zegho range. Rapha have now brought out some lightweight pro team glasses in conjuction (like Assos) with Carl Zeiss lens technology. If the full on look of the Jawbreaker doesn’t float your boat then Oakley’s new frameless EvZero may be what you’re looking for. All the coverage of the Jawbreaker with no frame at all to speak of.

I like the Jawbreaker because they work. That they look ridiculous is fine because there is a function to that form. Just don’t wear them at the Cafe stop without your helmet because you will look like a giant plank. And if that’s not in the rules then it damn well should be.