You had one job. One. You’ll have seen that phrase knocking round the internet. It’s not generally intended as a compliment. It’s about those people who had one job to do and messed it up. RedWhite have one job to do, make bibshorts. It’s all they do. No jerseys. No nice accessories. Nothing for winter. Just. Bibshorts. And not even an extensive range of them either. Just two in fact. The Race and the Bibs. One job. It puts even more pressure on them to perform. I guess that makes things a bit harder. To a certain extent you can cut some slack when a range is good overall though that’s probably some subliminal confirmation bias rather than a valid testing method. When you sell only bibshorts they need to be great and if the reviewer concludes that they are then you’ve stumbled upon something special.

Enter into any bibshort discussion and you get the usual recommendations. Chiefly Assos, Castelli, Rapha, at least at the high end. Now and again there’ll be a lone voice who pipes up with RedWhite. And that voice normally says that they’ve tried them all and that these are the best they’ve ever tried. Sometimes that voice isn’t alone. There are others telling you about this mystical brand. So it pays to sit up and pay attention.

But, I guess, I kept forgetting about them. When the market is so crowded it’s easy to forget. Fortunately my sub-conscious reminded me to reach out (though it might have been my Facebook feed). And when I reached out and asked whether I could review one of their range I was very excited when they said yes. After some lovely comms with Amreet, the founder of RedWhite, the bibs duly arrived about a week later. 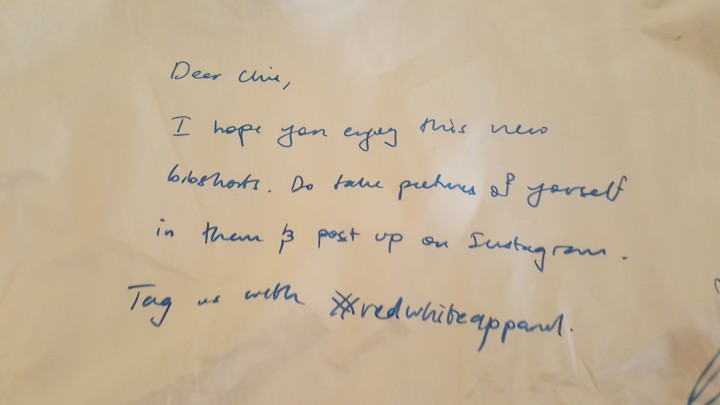 That’s the back of the package the bibs arrived in. It takes moments to do that. Now, the cynics amongst you might say that it’s helpful in terms of getting a favourable review. It might well be because we all like to be treated as individuals. But it’s a nice touch. And no-one gets good reviews out of me without the goods being good!

So, back to the range. This link explains the difference. Essentially you’ve got an endurance version (the bibs) and a race version (the race). The latter, being tested here, are intended for that bit more aggressive riding, your club race, TT that sort of thing. It’s no co-incidence that I use the Supersix for most of my testing so aggressive set up is a given. But the Six is also my mile muncher, so though the race shorts maybe intended for that sort of thing, it’s interesting to see how they stack up for everyday riding. 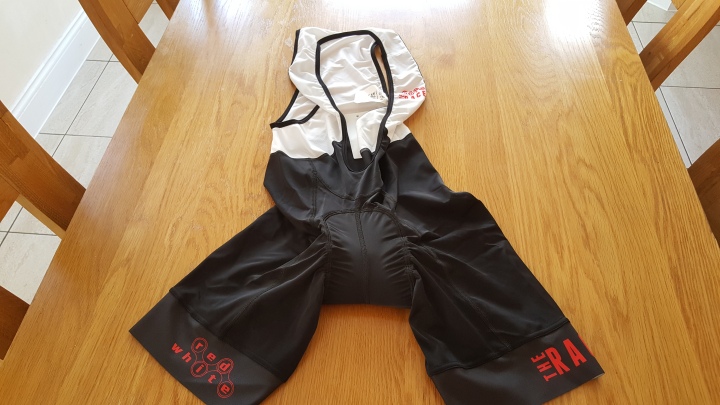 First impressions are good. Flat lock stitching (though I have previously said I don’t appear to suffer in the absence of it) and a good clean design. Much depends on how much you like logos. I do and I like where they are.

The cut is a world apart from the Assos bibs that I wrote about recently. And that means a nice high stomach area. I prefer this approach. It feels more secure and does not create any issues in relation to breathability. It’s just nicer. The straps aren’t laser cut or bonded. They’re traditional and they just work. Indeed, you might say that these are just traditional bibs full stop. I’d not argue against that. In the quest for improvement I do worry that we might move away from what does work. So while the elastic band shoulder straps of the Assos S7 are lovely things you can achieve similar levels of comfort with lightweight mesh. Implementation can be as important as technological advancement.

The lycra deserves a special mention. It’s fair to say that not all lycra is created equal even if the %’ages on the labelling often suggest that all things are equal. RedWhite talk at length about how they sourced their lycra, from MITI of Italy, here.  It is both soft and, so far, very hard wearing. There’s quite an interesting discussion on there of different types of lycra and it’s well worth a read. For me these were sufficiently compressive without being overly so and, at the end of the day, just felt really nice next to the skin. They appear to be very breathable as well and I never found that I overheated in any area. 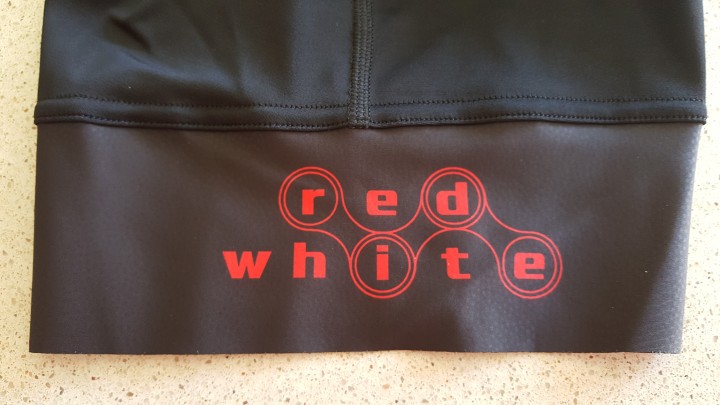 As you can see the leg grippers are quite long! You might also make out that they have a very subtle leather effect going on! Don’t worry, they’re still your usual standard elastic band gripper. In terms of overall length these are once again Goldilocks on me. Slightly longer than Assos, way shorter than the very long dhb Aeron Race. Like all good shorts you don’t just pull them on, there has to be some arranging and moving things around to get them where you want them to be. Once on they disappear.

There’s little to speak of round the back apart from the addition of some reflective tabs. The rear mesh is a wide affair which breathes really well. There’s no silly technical descriptions of how the shoulder strap works. It just does.

Then there’s the pad. You live or die by the pad. Well, you chafe or don’t chafe anyway. I tried these on a several rides without chamois cream and on my Charge Scoop saddle. You will recall that I was in two minds about the saddle. I kept it and made some minor adjustments and I think it’s pretty much there now. 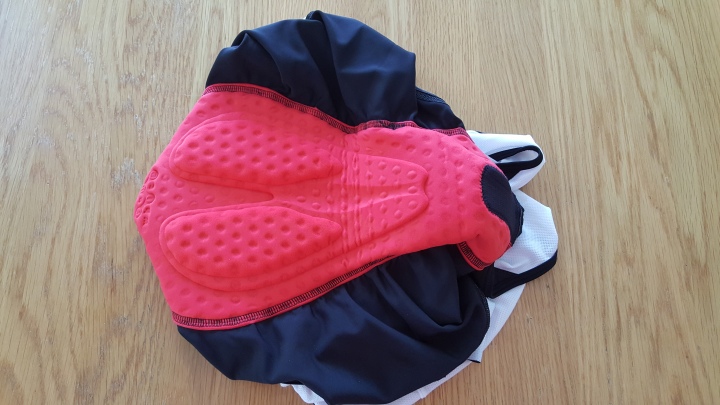 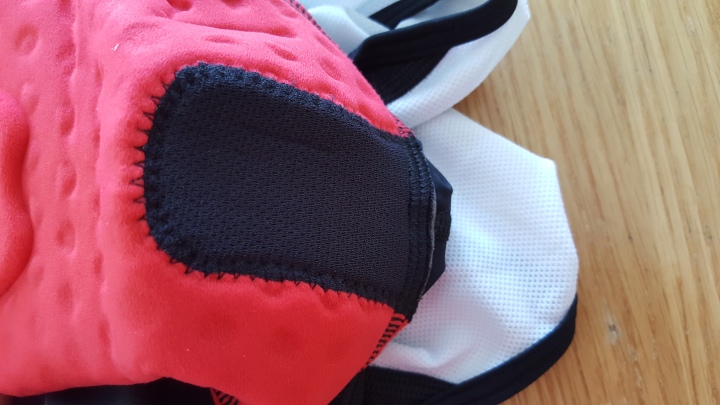 The first thing to note is that second photo. It’s a Kuku Penthouse! Sort of. I mean, it’s not given that name of course. It’s not really described in any of the literature but it’s a mesh section where your gentleman’s sausage sits. That’s provided you arrange it vertically rather than diagonally of course. You can read about all the techie stuff of the chamois here. It’s actually all pretty straightforward, foam, gel and inserts. The cut is, to me, spot on. It’s a good sized pad and not overly large. It works. I’ve read other reviews which suggest that over time it moulds to your shape. If that happens, great. But it seemed very much that it had already done so right out of the box, as it were. I won’t go on at length, it’s one of the best chamois that I have had the pleasure to use.

I’ve been testing these over a variety of rides recently ranging from the slower endurance ride to the absolute lung busting sprint rides. And while RedWhite describe these as being race shorts and, ergo, more suitable to a race position, I found them absolutely fine whatever discipline I was deploying. Better than fine in fact. They’re brilliant. Arguably they are that bit better when you’re in the drops but the difference between crouched and upright is very slight. If you’re not a racer then you might look to the bibs instead but these do appear to me to be a jack of all trades and a master of all.

So far they’ve held up against abrasion, they’ve washed well and kept their shape. But it’s early days so that’s absolutely to be expected. At the moment the only proper test is how they feel in use. And they feel absolutely great. You’re bound to ask where they place in the grand scheme of things, and that’s a fair question. They’re a lot cheaper than the Assos Cento and, to my mind at least their equal it not better. They’re certainly better value, clearly. The Equipe fight back on value but natty pink stripe aside I think that the RedWhite still win out. Leaving only the Parentini Shark.2 to fight it out. We’ll call that a tie at the moment, and I’ll update as we move forward.

These go to the top of the class. RedWhite had one job. And they nailed it.

I forgot to add, there’s also a crash replacement programme and if you need any help then I am sure that yuva@redwhite.co will be only too happy to answer any questions you have!

If you’re in the UK then these are sold by the always fabulous Always Riding.

If you’re elsewhere then please head over to the RedWhite store.

The official size chart is below.