As I’ve already said Redwhite have one job, making bibshorts. And in my previous review of the Race version I was blown away. Well, they have another job now and that’s to convince me of the performance of their endurance version given how happy I was with the racier ones!

Redwhite are still a young company with a limited range, but there’s good news. A ladies variant is currently out there being tested in the wild and hopefully will be on the shelves very soon. And they’re taking on board user feedback about winter clothing so I hope to see something wintery from them as well. And given the high regard which I have for their products I hope it’s this year!

If the Race bibs that I tested are so good you might wonder why on earth you’d buy the endurance version anyway. I’m quite happy wearing the former for just about everything, they’ve become my go to posh pair of shorts. But Redwhite explain the difference between the two here. Essentially the answer lies in the chamois, in the race a little lighter, a little less padding and a slightly different overall position. In the bibs it’s placed for full on comfort. Is it possible to have something that’s too niche?

So, first things first, the design. They are very red. Very very red in fact, but, in practice, unless you’re wearing the most see through of white jerseys the red mesh is invisible. The branding is subtle with just the logo on the right leg. There’s also a bit less branding than the Race version which has branding on both legs. In terms of look the lycra is more matte than shiny which is something I also like. As far as black shorts go the design is a good one in my view. If you’re OCD about colour matching then you might be concerned but red and white are pretty uncontroversial colours for the more anal amongst us. Anyway, get over it, they’re called Redwhite!

Once more I’d say there’s nothing overtly technical about these shorts. It’s good old mesh straps stitched to multi panel lycra shorts. The lycra is once again supplied by MITI of Italy. Indeed, I’d thought about writing a longer piece here about the deconstruction of my bib short wardrobe. What’s still amazing is how different they all can be and yet, for me at least, they all work in very similar ways. It’s true that the lycra can differ in look, feel and compression, that the grippers differ in form and function and that straps are a hotly debated topic. But, as I’ve said before, if they work, they work. And Redwhite seem to have nailed it from the off.

The stomach area is very anti-Assos and cut quite high. Once again I prefer the security of this approach though after shedding even more timber over the summer it’s perhaps not quite the important issue that it once was. The cut of shorts in this area is hotly debated but I can’t say that any high cut has ever made me suffer from any lack of cooling. The fit is just perfection with no bunching, no wrinkling and just the right amount of snugness.

The straps are quite lovely made from a breathable mesh with black edging. There’s no race pocket at the rear, no fancy laser cutting but it all just works perfectly. They’re light and airy and, crucially, entirely unobtrusive.

The leg grippers are the same as those found on the Race. They look vaguely leathery (at least to the camera) but feel fantastic in use. In terms of their compression and fit (I’m wearing a large) for me they hit the sweet spot of something that keeps you in place without producing sausage thighs. They’re a fairly wide gripper and produce a nice contrast to the rest of the short. In terms of leg length they’re one of the longer pairs but certainly far from the longest. In that respect they probably once again hit the sweet spot.

Round the back and there’s not a lot to report other than the useful addition of a some reflective tabs. There’s flat-lock stitching all round and, as we’ve come to expect from Redwhite, the quality is fantastic. But, of course, it’s the chamois that everyone’s come to see. And it’s a winner. 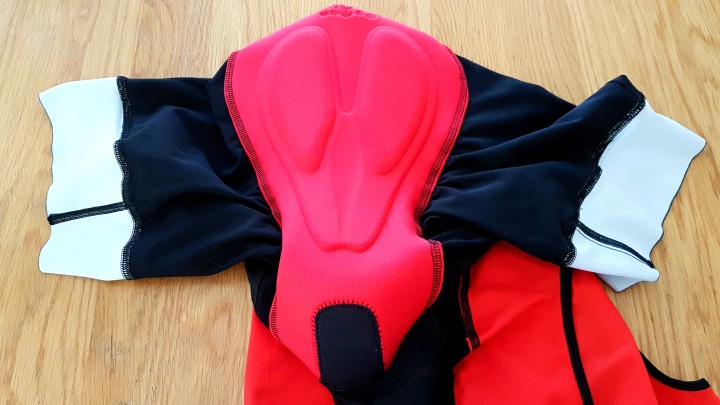 It’s a fairly substantial affair in terms of width and length, it’s very much the all day sportive chamois in that respect. There’s the nice addition of a kuku penthouse-esque affair up front to reduce chafing. If you prod the chamois manually it feels quite soft but that doesn’t appear to translate into a lack of support whilst riding or any lack of longevity. The chamois is triple density with each variation being sited in the place where it counts.

The questions that are to be answered are whether they’re any good and which of their shorts you should choose. The answer to the first question is easy. They’re brilliant. They’re also great value. Depending on where you purchase, whether that’s direct from Redwhite or somewhere like Always Riding you’re going to be paying around £110. Yes, that’s premium but in the wide world of what premium is it’s a bit of a bargain to be honest and on par with an entry level pair of Assos.

In use you put them on, ride a long distance, have cake, go the long way home. You don’t think about your shorts during this because they just do the job. You may occasionally glance down and cogitate that the design makes your legs look lush but that’s it. No fuss, no drama, just performance. They wash well, they appear to last in the rides I’ve done to date with no bobbling or seam degradation. They’re as good as anything that the big boys make. Arguably it’s not hard to make bibshorts, the star is generaly the chamois. But in that chamois Redwhite have a very big star indeed.

So these or the Race? Well, those are £110 as well so it’s a straight choice rather than a financial one. If your riding is social, endurance, sportive etc then I’d say go for the extra comfort of the Bibs. If you hoon around then get the Race but don’t be surprised if they’re fantastic shorts on the coffee and cake run either. It’s just that if you really want to push on they suit that task a little more. Thing is, in terms of premium pricing, these are pretty cheap anyway, if you can say such a thing. So if you split your times between disciplines why not have both?

In the realms of still only having one thing to get right Redwhite are still nailing it. Bring on the winter stuff.

10 thoughts on “Redwhite: the Bibs”