Look, it’s not quite cold enough to really do this review. But, if I wait to until it is they will be gone. So you want to know if it’s worth buying these now. Consider this a review of their potential. It’s not a worthless review, I’ve worn enough gloves to tell you how they feel and how I think they’ll perform. And if I start by telling you that the Aldi winter gloves feel a lot like the Castelli Estremo (£50+) then you’ll see where I’m coming from.

The Aldi winter glove is designed for the cold days. It’s available from XS to XL and retails at £4.99. Yes, you read that right. £4.99. Less than a fiver. I mean, they could be merely ok and that would be fine. Oh, and the come in the black pictured or black and fluro yellow. Anyhow, Aldi claim:

And that’s pretty much the same story for the lobster gloves as well. Save that they’re also rather more boldly described as being waterproof in the actual description rather than just the specs. Oh, and they are £7.99 but, come on, find me proper capable winter gloves for £13 and I’ll show you two pairs of these.

The thing about budget gloves, rather unashamedly, is the aesthetic. And, in the past, the aesthetic has been at best functional. But while something like the Castelli Estremo with its pretty weave and giant scorpion is a prettier glove I don’t think the Aldi glove is far off the aesthetic of a Gore glove. Check out the Gore Universal winter glove and there’s not much between them. The same is true of the lobster, it’s pretty similar in overall look to some Pearl Izumi ones I owned. So, not the last word in beauty, but in terms of looks Aldi are certainly getting there. I tried on both with my premium Parentini Mossa.2 jacket and they didn’t look out of place. 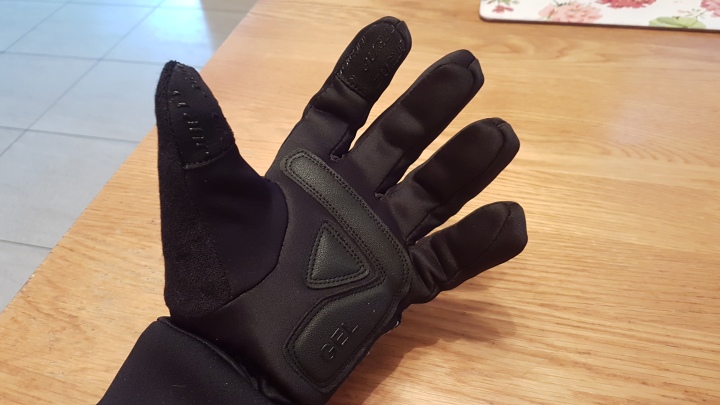 It’s essentially business as usual on the winter glove. A vaguely softshell like outer with a velcro wrist closure, terry “face wiping” thumb and some gel in the palm. Not a lot of gel but the depth of the overall padding should help soften those winter bumps. I’m happy to report that the touch screen feature actually does work and you can work a smartphone with these. I wouldn’t say it’s easy, these are thick gloves. But answering a call should be more than fine.

But it’s the reflective trim that really deserves a mention, each glove featuring reflective piping, side panels and finger lines. Even the Crane logo reacts. If you’re signalling there’s no way you won’t be seen. Whether that will matter is quite another story. 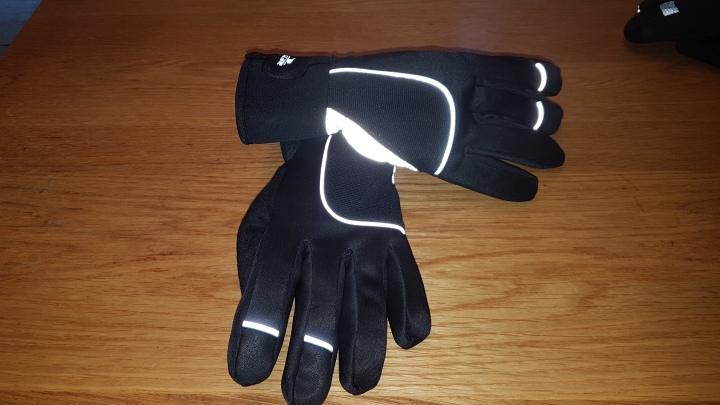 The inner is essentially a “thinsulate” type fleecy material. In terms of use these should be more than capable in the low single digits and, depending on how you run, well below freezing. They are certainly windproof. They also have a waterproof membrane. They don’t shed water from the surface particularly well but my shower and sink test didn’t see any water get through. It will, in the end, simply because there are seams etc. But that waterproof addition is a great touch. In terms of how breathable they are don’t expect miracles, if you want warmth you’re generally going to put up with some moisture. They’re well made and seem robust. Whether you’re a commuter or sunday rider I can’t see how you can really go wrong with these.

If you do run cold, as I do, then you really should try lobsters. And when you do you might wonder how they are going to work. The lobster gloves feel slightly less protective than the winter ones. But, dear reader, do not be alarmed. Lobsters work because by bringing two sets of fingers together they can provide each other with warmth. If you’ve not tried them, prepare to be amazed. Of course, there’s a trade off, if you’re operating the gears it can be a bit trickier. If you’re operating electronic gears then, why are you reading this anyway?

The inner liner is stitched into the main body of the glove. This time the liner is branded Thinsulate fleece though, in practice, it feels no different to that in the winter gloves. The inner liner itself is actually traditional glove so each finger has its own, well, finger. The two fingers in each section don’t actually touch each other but that’s not a bad thing actually. All the warmth of contact and none of the sweatiness.

Once again there’s a tidy little array of super reflective trim. As I said above these are actually described as waterproof. In practice they performed the same using my shower and sink test as the winter gloves. The surfaces wetted out but nothing got in. Again, in persistent rain etc something will eventually make its way in somehow. But these are very good in terms of how they stand up to moisture. Full rain test as soon as it’s cold and wet enough. Which might be November looking at the forecast.

There are very few faults with either of these gloves, in fact the only thing I could possibly find to criticise was that the velcro part of the wrist enclosures could be longer and the wrist enclosures themselves could be sized down. There is a gap that would be open to the elements if you chose to wear them outside the top garment. But, just don’t. Wear these inside the cuff of your jersey/jacket and all is right with the world.

So, my initial thoughts are that Aldi have nailed these. Good quality, great feel and the aesthetic is ever improving.

£13 for the pair then. That’s 5 flat whites. And as much warmth and inner glow as a flat white can bring, skip a few and experience true outer warmth instead.