Click here to buy it at an insane price

Or, if you fancy the MIPS version

The Giro Synthe is £200. The Rapha ‘Giro Synthe’ is £240. The Giro Foray is £27.99. Do the math(s). The Synthe is a very nice helmet, well received, well reviewed, light, aero and, of course, the MIPS version is worn by quite a few of the pro peloton teams. So, is the Foray a cut price Synthe or just a cheap Synthe wannabee?

Well, it’s pretty much the same shape. But it is lacking a few features. You’ll note that the side aerofoil is missing from the Foray, so you don’t get that hole to stick your sunglasses in. The moulding is slightly different being ‘all in one’ rather than being made up of separate pieces of construction. So, the transverse structures on the Synthe are joined to the foam base rather being one pressed shell as in the Foray. The interior pads are washable but aren’t Giro’s x-static antibacterial treated ones. The base is a bit more exposed. But, other than that, and about 40g or so, they’re very similar indeed. Crucially, if it’s important, they look the same. And the look is a good one. Giro have moved away from the mushroom look of the Aeon and Ionos and achieved something much sleeker. It sits lower on your head and bulges out less at the sides. So, enough of what it doesn’t have, let’s deal with what it does.

The Foray has 21 vents. And that’s a lot. It’s one of the aeriest helmets I’ve tried on but it’s also a pretty quiet one. It’s undergone the same wind tunnel testing to maximise through put and I think that’s evident from the rear ‘exhaust port.’

The weight of the helmet is approximately 280g in size large, mine actually comes in at 296g. That’s not light. And I suspect you might be able to perceive if not feel a bit of that weight if you’re coming from a lighter helmet. For me, not an issue, as my Mojito weighed around 255g in size large. You won’t feel that type of difference. I’ve seen it suggested that if the extra weight bothers you, take 80g less in your water bottle. I don’t accept that argument, head weight is felt rather than something holding you back. But it’s a non issue at these sorts of weights. Indeed, given that my Lumos is over 400g and that doesn’t bother me then I do think these things are overstated. 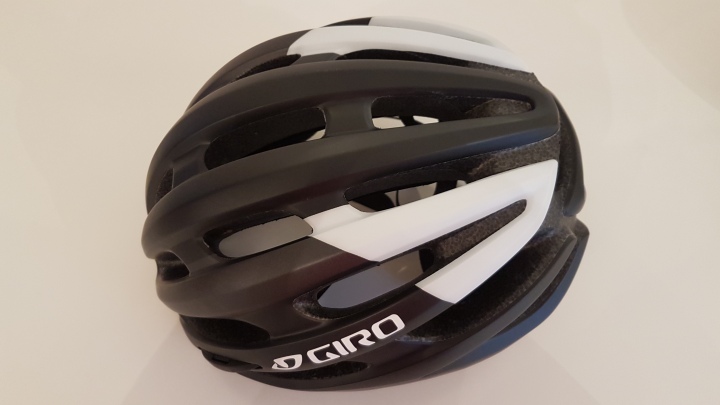 The design is a good one, subtle and, in my view the matte black and white is something which is likely to go well with most kit choices (these things being far more important than weight!).

The retaining job is carried out by Giro’s Roc-Loc dial system, you have to dial up and down to get the right fit. It’s easy with one hand, easy with gloves. It’s not quite as easy to get a great fit as with the Kask helmets which allow that up and down movement. It’s also the case that the very basic fabric strap is not as comfortable as the Kask’s leather but, people, £27.99. It does the job and it does it with no fuss. 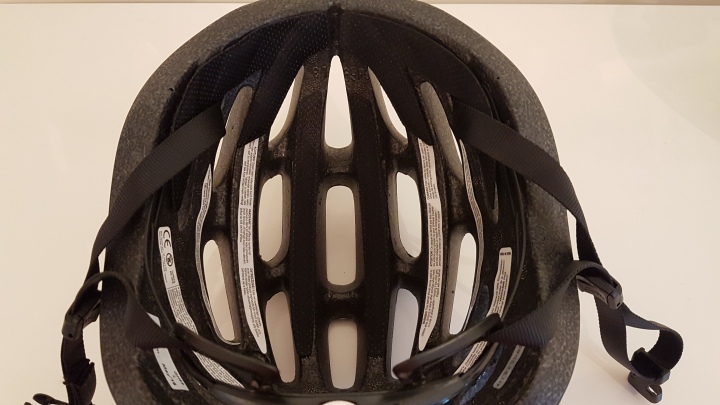 The interior padding is sufficient if a little sparse. It’s all above and to the front with little at the back. You can see the exposed base here which is prone to being knocked about but I always take good care of my helmet! It’s also worth noting that the Foray MIPS is slightly better endowed in the pad area. It’s also worth noting that the Synthe has this exposed foam as well whereas the Kask Mojito continues the plastic coating over the top of the foam.

The helmet is certified to CE EN1078 standard  and without commenting on how protective it will be it’s unlikely to be any better or worse than any other similarly certified helmet. The MIPS version is probably a good investment but the jury is still out on whether MIPS does offer that additional protection. Have a look at my piece on helmets for a discussion on that.

I’ve been using the Foray for a few months now and it’s pretty great actually. Nice helmet, good looking, fits me well enough. And cheap. It’s available in loads of colours and three sizes. So you should be able to find something to fit. Mine is now my main road helmet and, of course, my main cyclocross helmet. There may well be better helmets out there but, in my view, there’s simply nothing to touch this on price.