You know how much I am a fan of the original X-One tyres from Schwalbe. And now we have a hardcore version which at the moment are available at £17.99 each.

It took a while to get round to using these. The CX season has been uncharacteristically dry. That said, of the rounds I’ve done in the past 3 years we’ve been pretty lucky with rain ON the day. But, often, pretty ‘lucky’ with lots of rain leading up to the day, this is CX after all. And this year was just mad. Even the bog that is Carmarthen was lacking any real mud. Other rounds were practically dust bowls. So the ‘normal’ X-One saw me through every round with a minimum of protest. Abergavenny was slightly tricky. It was dry but the clay like mud did clag the tread of the original versions a little bit. On balance they were still probably the right tyres to run but I’d like to have seen how these new versions performed.

I ordered these late in the season because that was when they become more widely available. I decided on normal clinchers rather than tubeless. Why? Well, I wanted to leave the normal X-One (tubeless) on one set of wheels and be able to take these on and off my Fulcrum 5 DB at will. If you shop around they’re only £17.99. That’s not just cheap for CX tyres, it’s bonkers cheap for tyres full stop.

These are part of the performance rather than Evo line but that just means that this variant isn’t tubeless, that variation being saved for the Evo line. You still get the same tread, a slightly different TPI but the same overall puncture protection. And despite the lower TPI they still feel pretty supple overall. Indeed, they feel, like the rest of the ‘One’ range, quality.

In the week that they arrived I was thankful because, come race day, these were the scenes that greeted us.

Proper, full on cyclocross. The first round in an age to have any snow. Indeed, the Welsh league finishes pre Xmas so it’s been quite a few years since this happened at all. And the Tredegar round had it all. Snow, slush, deep mud, claggy mud, shale, off camber, hills, deep hole hiding puddles, tarmac, grass, snow and slush. Yeah, I know, snow and slush twice. But there was a lot of it. And the temps were brutal. So what better test could there be of the X-One bite? 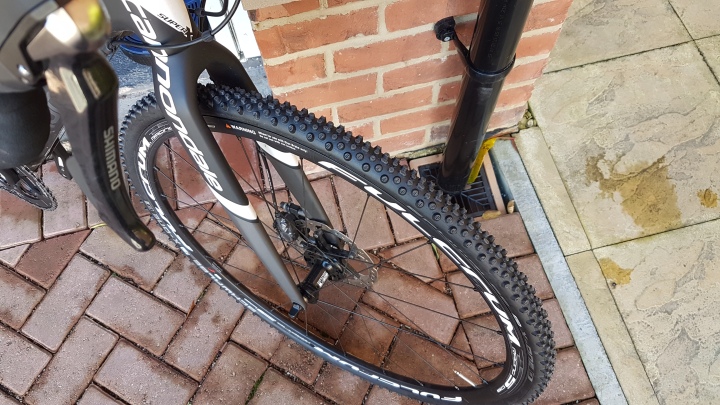 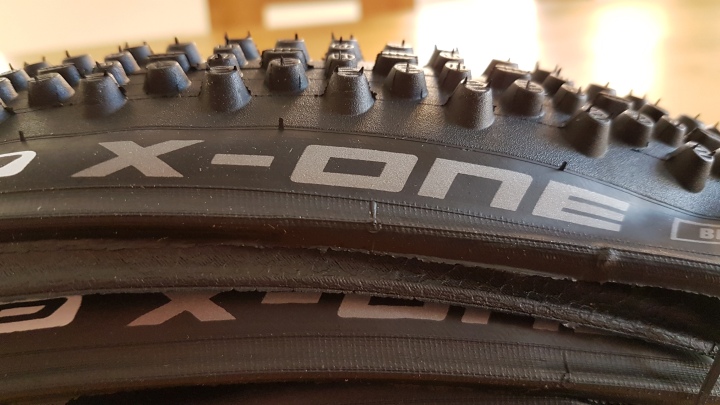 As you can see they really are chunky. The knobs are considerably higher than the stock X-One as you can see below (original on right).

The central studs are 3mm and the outside ones 4mm. Believe it or not that’s an increase of only 1mm over the normal versions but they do seem more pronounced. They’re less in number across the tread, clearly, but overall there’s a lot more area covered by them. The side knobs in particular stand out as being significantly more grippy. They’re directional as well but, for the life of me, I’m not really able to pick out a discernable difference in any direction.

In terms of mounting these were a piece of cake. Obviously these are mere clinchers rather than tubeless but mounted on my Fulcrum Racing 5 DB they really are hand install only with no need for levers at all. I’ve noticed that this year’s Schwalbe range are considerably easier to install all round whether tubeless or not.

In use there’s no doubt that this tyre has a niche. You can use the original version on tarmac if you want to. Not for any considerable distance, but you can. With the new version this really is just a ride across the car park jobby. It’s not uncomfortable. It’s just that those high shoulders won’t work at all well cornering on the black stuff. Neither is this a tyre for those dry off road conditions. Mostly because it’s likely to offer less than Schwalbe’s other tyres such as the G-One and X-One. No, it’s mud where these come into their own. Or snow.

And it was those conditions that faced me mere days after the tyres arrived. Those were the conditions above. The car park was covered in snow, the course full of sludge and mud with the occasional foray into under tree barren wastelands. It really was a winter all conditions course. The only thing missing, I guess, was grass. There was literally nothing to get caught up in the gears (or tread) other than varying consistencies of mud. Slimy mud, claggy mud, snowy mud, you get the idea. Not only do the X-One Bite offer considerable grip in all of those conditions but they’re also very happy to shed that mud whenever the conditions allow. Indeed, I find that they shed mud easier than the original X-One.

There simply wasn’t a point where I wanted more speed or more grip. They tore through the course as much as my (lack of) ability let me. They were even great on the technical bits where there was no mud and powered up the rock infested uphill off camber switchbacks. They’re pretty easy to run at some low PSI’s as well.You can get them down to around 30psi with no effect on the rims. You could probably run them a little lower but, if you want to do that, the tubeless version are undoubtedly a better bet. They are good when the conditions are ‘hard.’ But that’s not their forte so if the race is going to be a grass crit, these are not the tyres you’re looking for.

It’s been an interesting CX season. A lot of the time I could have run on G-One speed and got away with it. But the rest of the time the X-One and X-One bite have performed really well indeed. With a sensible choice on the right day the only thing holding me back is me.

Sadly the season is over now. Or, at least, it was. There’s a ‘fun’ only round on the 15th January. The long term forecast is cold. The race is close to the snowy round. We might see something just as or, hopefully, even more extreme. Something with even more bite. Well, the X-One bite are ready and waiting.