So, second shark product this year. So, if this is anywhere near as good as the Parentini Shark bibshorts  then we’re onto a winner.

The Shark 500 front light was kindly supplied to me by Cycletorch directly from Amazon for the purpose of testing. As you might know I’ve used my Cateye Volt 1200 as my go to commuting and night time racing light since I purchased it last year. But can a 500 lumen sub £40 light compete with that sort of quality? Well, almost every review of the light on Amazon (click here to buy) is overwhelmingly positive. So that’s a pretty good place to start. 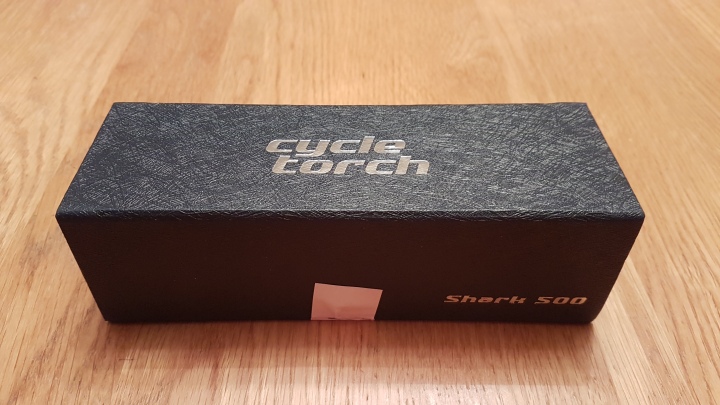 And, for the really quite reasonable price of £37.99 we get off to a great start. You don’t get a USB plug charger but you do get the leads. Two lots in fact which is useful as you get a rear supplied as well. Both are rechargeable.It’s a nice little presentation box and you even get a nice ‘thank you’ set of instructions. It’s all very agreeable.

The model number 500 refers to the maximum lumen output. This isn’t one of your surface of the sun lumens output models but, as we’ll get onto a little later, that’s not really all that important in context. For the Shark 500 is a bright young thing.

The run modes are pretty straightforward so you get the following run times depending on mode:

Those are the claims and, frankly, they seem to be bang on. Turning on is simple, one press of the central button turns it on and it glows blue. When it’s close to discharging it glows red and, eventually, will turn off automatically when it’s close to zero. On my hour commute at 500 lumens it remained blue. It’s IP65 rated with rubber bungs protecting the charging ports and seems as weather resistant as any other light I’ve tried. So you’re ok with rain but don’t go submerging it. It also has a Samsung battery and that’s a pretty good selling point in my view given that this is a tried and tested Samsung battery and not one from the Galaxy Note!

The unit itself it actually very small. It’s only about 6 inches. It’s not hewn from CNC milled aluminium but the plastic case seems sufficiently robust. The main attachment mechanism is attached to the light and the part which meets the bars is rubber coated to allow sufficient grippage. You attach with the supplied big rubber bands (TM) and tighten according to preference and bar diameter. This is one of the lights greatest benefits but also a potential issue. In use I’ve taken it over some sufficiently bumpy surfaces and the light has stayed level. It’s also easy to adjust by hand. There is the risk that severe off road could see it droop but it’s quick and easy to pull back. Crucially, swapping it between bikes is an absolute cinch. 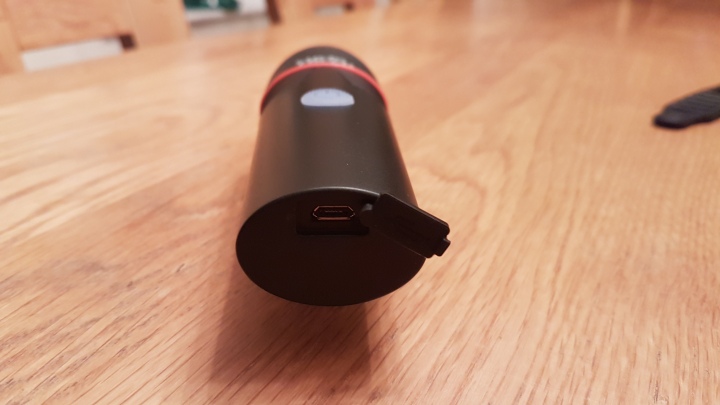 There’s a neat little rubber flap at the back which pops into place over the USB port. 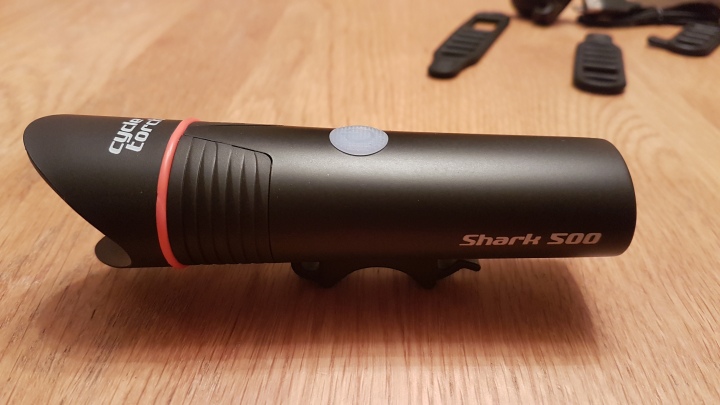 And, in side profile it actually does look a lot like a Shark! And it’s at this point you see the main difference with other lights come in. It’s that hood around the main lens. Here’s a picture of the front profile.

It’s quite pronounced and creates a cut off beam rather than a massive spread with a central hot spot which pretty much every other light opts for. Indeed it’s similar in some ways to the rather excellent Philips Saferide 80 which despite being a lesser lumen model was very traffic and rider friendly. And that same story happens here.

You should be able to pick up the beam cut off at the bottom and top. The light is channeled towards the road rather than spilling out at the edges.It’s a little bit more pronounced in the picture below. Both of these pics were taken at 500 lumens in pitch black conditions.

All good so far, so I decided to test it against the Cateye Volt 1200 but angled the camera so as to avoid the cut off and try and capture how much light was created. Here are the results. 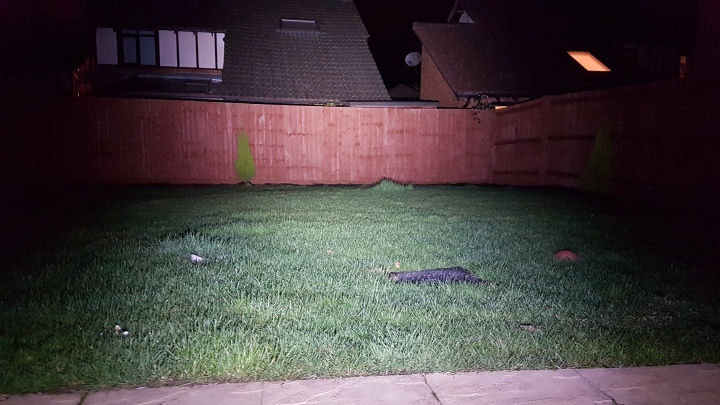 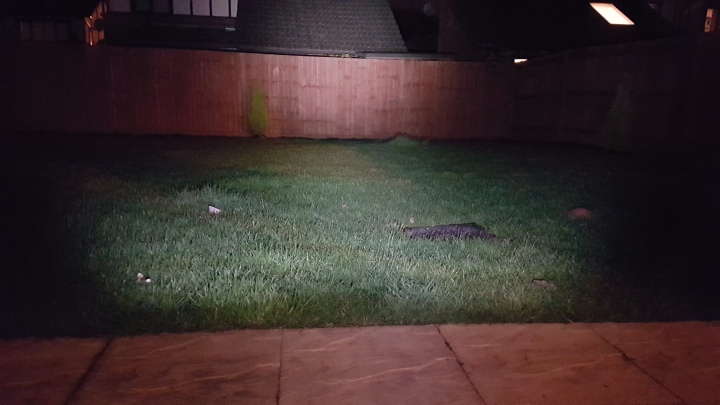 Taking photos of how a light looks in the real world is tricky. The camera can catch more or less light depending on circumstance but the above example is pretty representative of the real world performance of the light. The output is very impressive at full power but perhaps slightly less powerful than the Cateye. Run the Cateye at a comparable lumen output and they’re pretty similar. Indeed, running the Shark on medium (250 lumens) isn’t far off the real world performance of the Volt on 450 lumens and with a comparable run time.

So far, so good. But it’s in the real world that the Shark works well. It’s a road light more than a mountain bike light because of that beam shape. And that’s fine and to be applauded. If you want to go off roading then I’d suggest the 800 lumen GT800.

On dark lanes at full power it’s good for 20mph plus. And on the darkest section of my commute where there’s little ambient light at all (this is Wales in winter) it’s a very effective light indeed. Run times are as promised, charging is easy (and quick) and, for the price, this is a really effective unit. The cut off appears to be effective in focusing the output and not annoying other road users. I’d read elsewhere that the cut off does prevent some light being spilled right down at the front wheel. That’s arguably true but I tend to subscribe to looking a little further ahead than that and the Shark deals with that with aplomb. There is an argument that custom optics would deal with beam shaping a little more effectively or that, for example, the hood could be reflective rather than absorptive. The latter might be a cheap solution for ensuring that lumens are preserved and might be something to consider. The former is a more expensive option and, after all, we’re talking about a light here which offers good performance for great value. As good as the Philips Saferide was, it wasn’t cheap.

But the Shark is a very good light indeed. It doesn’t overheat and doesn’t seem to have any little idiosyncrasies that seem to plague other lights out there. It’s simply very good. If you’re constantly in the dark you might want a few more lumens but for most of us this is all the lumens you’d ever sensibly need.

It’s not all that’s in the box either. There’s an added rear tail light. And it’s a nice little thing being hewn from CNC aluminium and having 4 modes, solid, flash, strobe and pulse. It’s once again USB rechargeable and snaps onto the bike using one of the supplied rubber bands. 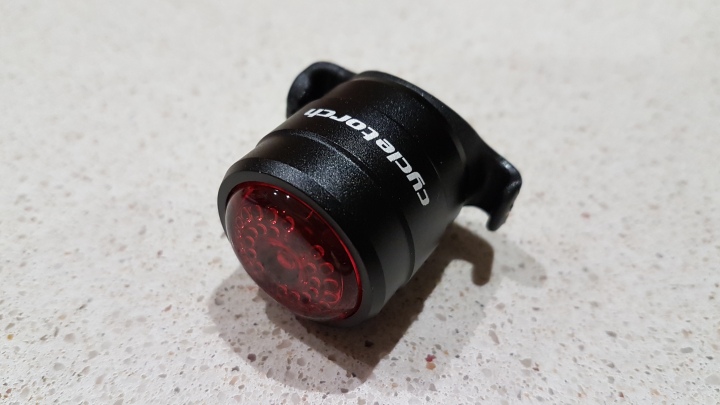 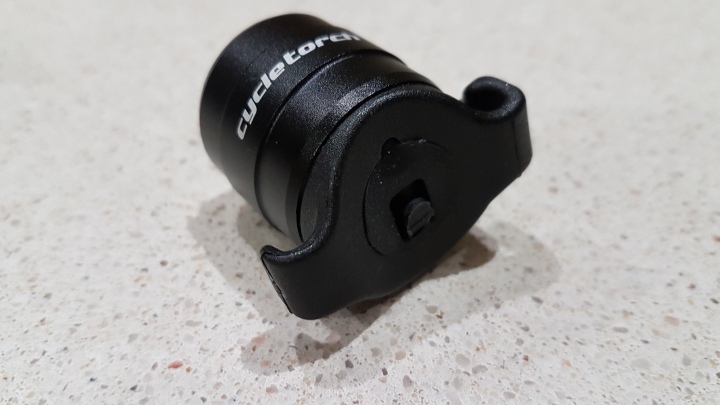 The output in terms of lumens isn’t earth shattering so this won’t be your main tail light but it’s mountable in many different places and a very useful thing to have. Turning off and on (and cycling through the modes) is simply a case of pushing the lens in. The buttons on both the front and rear lights work equally well with gloved hands.

And there you have it. £37.95 for a really effective commuting light with a one year warranty and proper back up. You can’t go wrong really.