You’ll remember that I was rather impressed by the Giro Foray especially at the much reduced price of £27.99. I noted in that review that the Synthe was many many times the price. I questioned whether it could ever be worth it. I now have a Synthe because I wanted one, liked the colour and, I guess the number of helmets can also be N+1. So the Foray gets used for the rough stuff, the Synthe for the posh stuff. But the question is, can the Synthe ever really be worth it?

Much, of course, depends on what worth it means. The RRP of the Foray is almost £50, the MIPS version £75, the Synthe £224 and its MIPS version and eye watering £250. But RRP means very little. The Synthe can be had for as little as £100 if you make do with certain colours, the MIPS around £125 if you do the same. You just have to know where to look and time it right, I did paying only that. Pricing is fluid so comparisons are often hard to draw. But what we can say is that if we take Giro’s cheapest road MIPS as being the Foray the Synthe is just over 3 times the cost.

Before we talk about the helmet itself let’s talk about MIPS or multi (directional) impact protection system. It’s probably best watched than explained.

And you can read more about it here. Essentially or allegedly it provides better protection from rotational injuries. I won’t go into the helmet debate and I certainly can’t vouch for having tested it but, for the reasons stated later, it’s quite a nice addition actually.

I guess the point to buying a Synthe is that you’ve bought the best. Aero tested, sleek and premium. And there’s little doubt in the flesh that this is a premium helmet. There are details that stand out, a nice shiny shell and it’s just a lovely thing to behold. 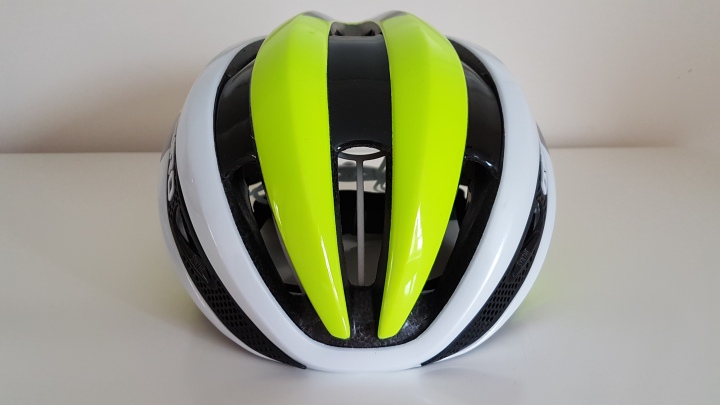 It’s available in far too many colours for me to go into in this review. I opted for the white and yellow (that’s what Giro call that) to provide a bit of contrast and a bit more top half visibility. It doesn’t really match much of my kit, but that’s ok as well. If you can’t match, go different. 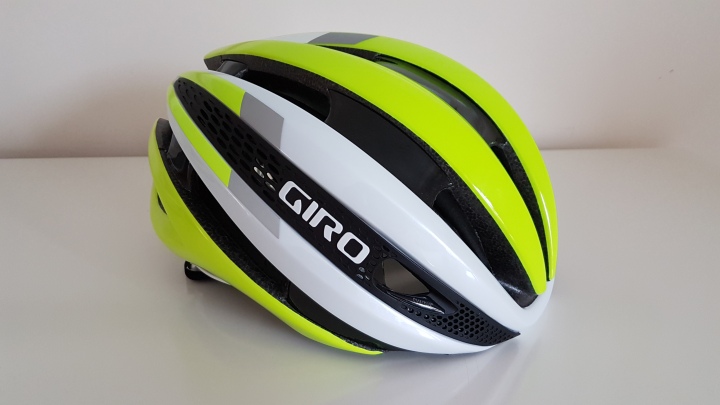 In terms of the overall construction there is much more going on here than on the  cheaper Foray. For a start that central section has a plastic grille running from the front to the rear. That’s one of the contributing aero bits apparently. I’m not really going to discuss the aero benefits because I cannot quantify them and Giro offer no data on them. But, what I can say, is that this is a helmet with an awful lot of throughput of air, you’ll understand why a little later. Indeed, I’d go as far to say that unless it’s mild you will be wearing a skull cap under there at the very least. Is it more ventilated than the Foray? Absolutely, and quieter, oddly. The Synthe has 26 vents playing the 21 vents of the Foray.

Weight? 293g in size large on my scales plays 296g on the non MIPS Foray. That’s not bad actually given that the MIPS system, light as it is, is adding a few grammes. It’s heavier than some superlight helmets, lighter than others. But, the thing is, for the reasons which appear below, you really won’t feel that weight here. 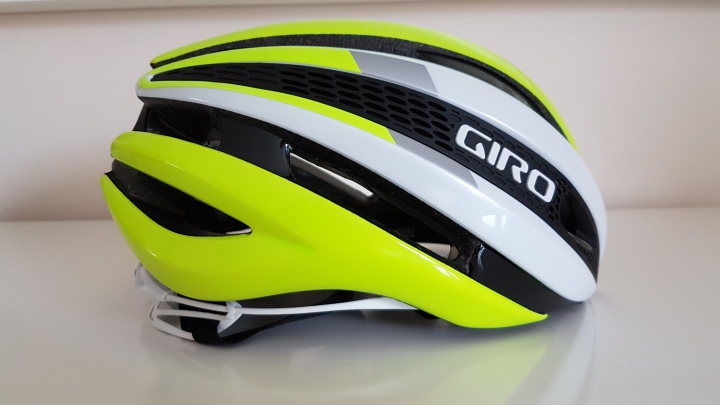 The quality of the mould is outstanding. Each bridge section is separately moulded and attached to the foam inner. That’s a clear step up from the Foray which is essentially a one piece mould attached over the helmet as a whole. Better? Aesthetically, if you get up close and take pictures. Better in a crash? No idea. 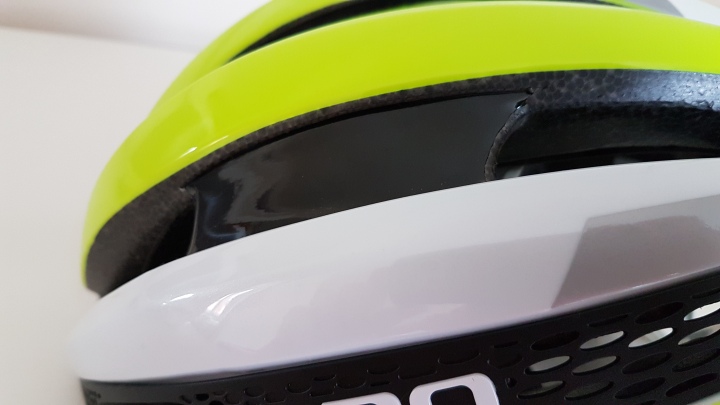 But there are some neat features on the Synthe and, in particular, sticking your sunglasses up there when you don’t need them. The hole here has a silicone like gripper to hold onto your glasses securely. The Giro wording is embossed rubber rather than being simply printed on. 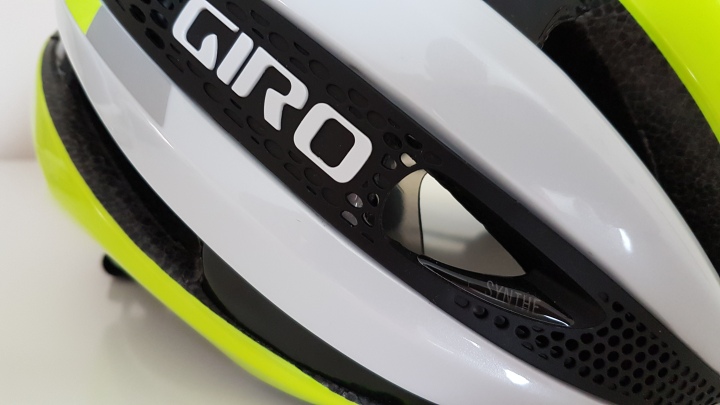 I’ve been testing them with the Oakley Jawbreaker which actually have quite short arms. You do need to be careful with placement. You need to make sure the arms go on the inside of the MIPS liner for both grip and safety. Once they are in they absolutely will not fall out. You can achieve this while riding but, frankly, it’s much easier if you stop. 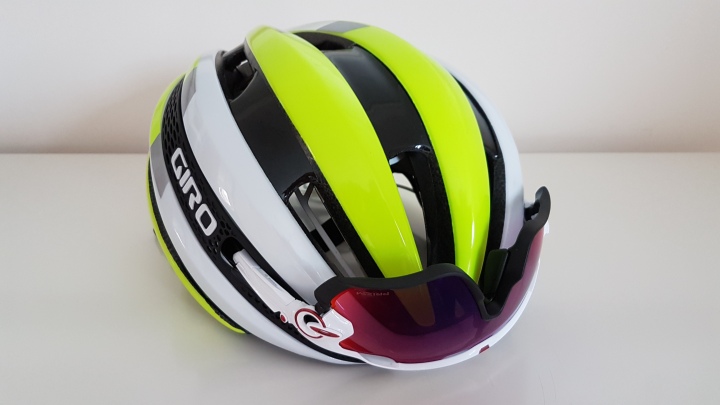 The rear is a bit of a work of art in my view, aggressive and pointy though, on the flip side, it also looks like you are wearing a bunch of bananas. The Roc Loc Air system is a simple dial fastener just like that of the other Roc Loc systems. But here, there is a difference. Essentially it keeps the helmet off your head and suspends it about 3mm away from the shell. Your head is therefore in contact with the Roc Loc and MIPS system and not the helmet. It provides for a much more comfortable fit which is impressive as the Foray was already a comfortable helmet. It’s adjustable up and down for height but only in terms of sliding it up and down a few notches at the back. The Roc Loc system doesn’t hinge or move far in comparison to something like the Kask Mojito. But it’s really easy to get a good fit on this helmet. Crucially it’s that Roc Loc Air that provides even more airflow, you’re in contact with less stuff ergo less sweaty head. 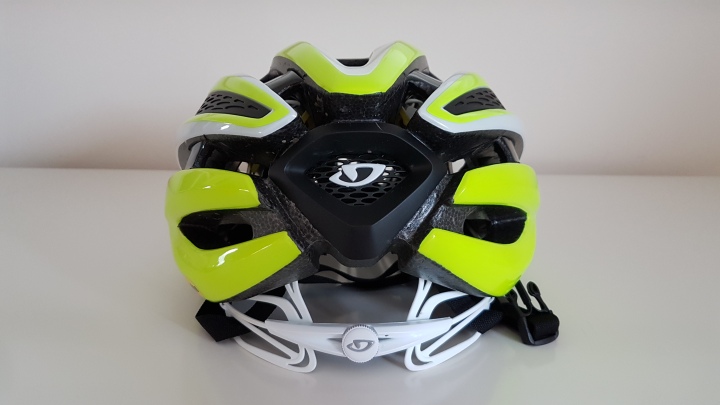 And finally, the inside, where the MIPS liner lives. The MIPS liner is the plastic inner shell emblazoned with the MIPS and/or yellow stickers. The white sections are the Roc Loc Air. 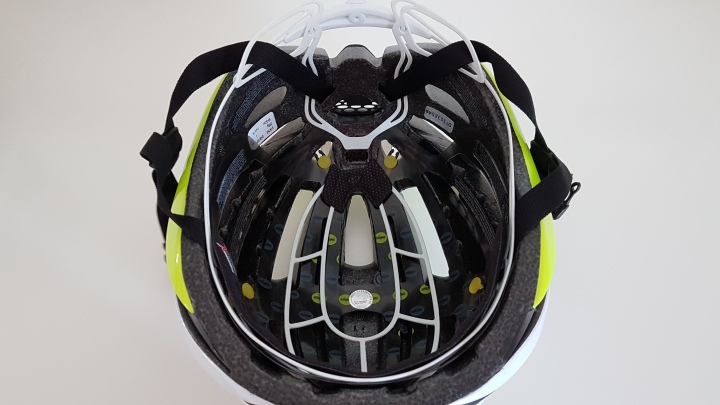 There is one potential downside to that Roc Loc Air system. It’s possible that, if you neglect your sun cream or hat in the summer you’ll end up with a more weird tan that mere helmet grooves. Cream up people.There are only front and rear pads, the front are x-static treated. You don’t really need all those pads because of the fact that the helmet is effectively suspended.

This review inevitably compares the Foray because I have one. They are at the opposite ends of the price spectrum and we can’t ignore the other helmets in between such as the Aeon, Cinder and Savant, all of which come with a MIPS option. So the question is whether something that looks the same, weighs much the same is the same and offers only incremental improvements across the board. The thing is, that’s pretty much what cycling is, incremental improvements per £ spent. Can a £250 helmet really be 3 times better than a £75 one?

It’s not 3 times better. But, then, it’s rare to see X times improvements when you spend X times the price. It’s always about marginal or incremental gains. Sometimes it’s about other things, the slight improvements in comfort, the perceived improvement in safety or the screw it it’s all about aesthetics. And there’s nothing wrong with that last one, nothing wrong at all.

Is the Synthe a perfect helmet? It’s not far off actually. It has a great form factor, superb looks and is ultra ventilated. It feels fast even if you cannot begin to quantify that. It does have its flaws. That strap is better than on the Foray but still cheap and cannot hope to compete with the lushness of a Kask strap. It’s not uncomfortable, just not as nice.

But, I think, it’s probably the most perfect helmet I’ve tried so far and looks bloody fantastic. And sometimes that’s enough.