Did you ever wonder how we got to where we did with cycling gear? With proprietary fabrics, special windstoppers, impressive linings, DWR treatment, that sort of thing? Did you ever stop and think, hang on, I walk the kids to school in this fleece and it really does the job? No, well I did and it seems I’m not alone. Rapha have gone to town on insulating their Brevet gear. It’s not full on North Face nuptse gilet yet. But it’s a ‘we know it works’ approach to cycling gear. Cafe du Cycliste have something that resembles a puffa jacket, with a roubaix back. There’s a little shift in perception taking place. Things that are proven off the bike may well work on it.

And that’s where the Potenza comes in because it’s practically a fleece. A really clever fleece but a fleece nevertheless. In truth that’s what a lot of roubaix jerseys set out to be. A close weave on the outside with a mini fleece backing on the inside. But the Potenza takes that further. It’s a fleece supplied to Castelli by Polartec, who know a thing or two about making fleeces. We’ve already seen them supply less fleecy materials to the cycling market in the Rapha Pro Team training and softshell jackets.

Castelli, prone to the occasional bout of hyperbole regarding their products say that “We hesitate to call this a jersey because it’s unlike any jersey you’ve ever tried. We think it introduces an entirely new class of product.” They have form for that, see the Gabba and the Alpha. And, in relation to those two items, their claims are justified. I don’t think there’s a better light windstopper than the Alpha. I do think there are better foul weather pieces than the Gabba. But, to be fair, they started it all. Have Castelli invented something that everyone will be doing in the future?

The Potenza is made almost entirely from Polartec Power Stretch. The theory is that it’s warm without being stifling and that it’s breathable without losing that element of windblocking. Yet it does without any fancy windstopper fabric relying only on the close knit weave of the fabric. In that respect it’s at least evolutionary if not revolutionary.

It’s a vibrant looking thing, this is the Surf Blue colourway, but it’s also available in grey and ‘mirage’ if you don’t want something quite so poppy. In terms of sizing it’s a slight oddity. I opted for an XL but it’s definitely a little looser than the equivalent Alpha jersey and much bigger than the Perfetto short sleeve. I reckon I could get away with a large if I wanted a super racy fit. But it’s fine. The body is fairly tightly cut, the arms a little looser and have a good length. You could wear it without a base layer if you wanted to but wearing a lighter long sleeve one will probably get the best out of it.

The collar (and cuffs, which I’ll get to in a moment) match and deploy a new design from Castelli. No fleece backed material here, just a polyamide/elastane stretchy fabric. It’s comfortable and does block the wind. There’s a chest pocket, if you need it and a very high quality zip provided by YKK. 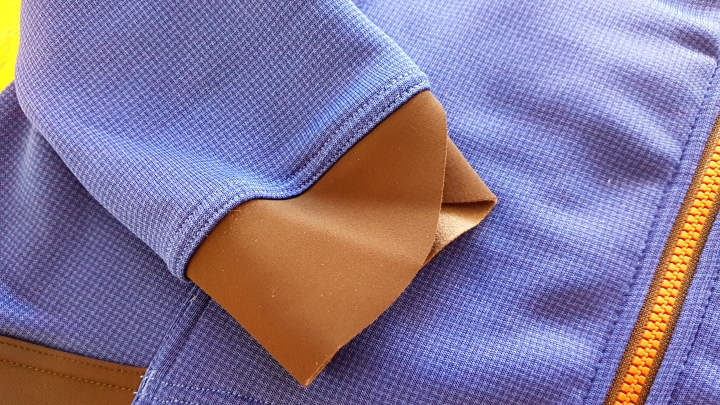 The wrists employ a crosswrap design where the rear section is open to allow a better fit. Again, these are very comfortable. You can see the grid pattern on the outside of the fleece quite clearly in the photos above. 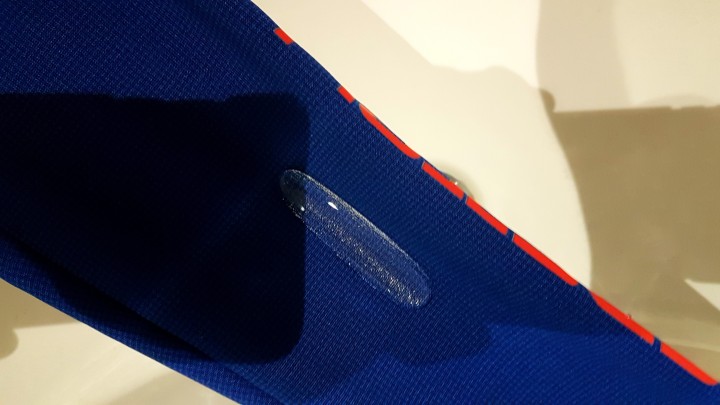 And while the fabric isn’t waterproof per se, it has received a pretty effective DWR coating. You can see the effect in these photos. In the second one the water has run straight off. It’s therefore good for light showers and in my experience shrugged off even heavier rain. Obviously the DWR won’t last forever but, for now, you can easily wear this out in damp conditions. You don’t have to make a choice between windstopper, rainjacket or roubaix jersey. If it’s only going to be damp, take this. To that extent, yes, we’re into a new niche or a new product category.

Waist duties are taken up by a giant elastic band with the welcome addition of a mostly all round reflective strip. It’s properly sized (unlike the Perfetto) and very comfortable. Indeed, the sizing is quite ‘take the kids to school fleece’ like. Perhaps with that bit more ‘race fit on the bike’ but certainly more utilitarian than your standard roubaix jersey.

The lining of the Polartec fabric is, well, very fleecy indeed. But it’s all a very lightweight package. But lightweight doesn’t mean any lack of warmth. 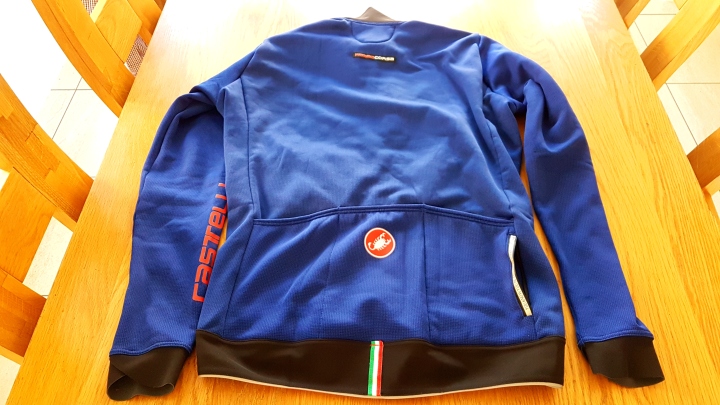 Round the back we have 3 standard sized pockets, one zipped side pocket and a few more reflective bits and pieces. It all adds up to a fairly comprehensive package.

It’s been a good time for testing. Damp, cold, milder and windy. So very windy. I’ve partnered it with a succession of base layers ranging from the wooly colder Craft warm to the lighter Craft windstopper and a new Funkier one as well (review of that one coming soon). It responds well to the different heat levels generated by each and it pretty adaptable in terms of temperatures. Interestingly Castelli say this is a 10-17 degree (C) jersey. In some ways that’s an odd statement of intent. There’s no need for a thermal jersey, arguably, at 17 degrees. But for a ride of 10 degrees starting out it’s good to know it can be comfortable up to higher temps.

However, Castelli Cafe (the direct sale arm of UK importer Saddleback) say knock 5 degrees off that range in flat contradiction to Castelli’s own claims. And, I have to say, that they’re right. This is more usable at lower temps down to 5 (or even below) and up to 12 with a base layer. Swap out for a short sleeve or sleeveless base and those upper temps are very achievable as well.

Despite there being no windproofing it’s better than most roubaix jerseys in keeping the wind off you and just as breathable. The DWR treatment laughs in the face of all but the heaviest shower and, of course, it dries very quickly indeed.

Technology is moving apace. We’re seeing new membranes and new approaches to age old problems on a very regular basis. The Potenza is, arguably, an old approach to an age old problem. How do you regulate and keep comfortable. I like it, I like it a lot. I’m not sure that £175 is an easy sell given that other options can be as effective even if they do things in a different way. The Alpha is a great jacket though perhaps not quite as warm or breathable. A thermal jersey and gilet may be more practical on certain days. But the Potenza is a hell of an all rounder.

At £100 I think it’s a much easier sell. It blurs the boundaries between a jersey and jacket and creates a proper 3 season piece. I’m not necessarily sure that we’ll see a glut of other products aping it in the manner in which everyone aped the Gabba. But there are subtle signals that other solutions to cold and damp weather are being looked at. That’s no bad thing.