What’s your view on climate change? Because, you know, in certain countries you may never need to wear this jacket. Indeed, if it lasts as long as I think it will, then even the Swiss may not be able to make use of it. The last proper winter down ‘sarf is fast becoming a decent memory and, as I write this, the number of days I’ve been able to wear this is in single figures. But those were cold days and very windy ones. If you’re reading this in Scotland or Northern England, this may well be the thing for you. You Europeans, yes. Us in the shandy drinking south of the UK, perhaps not so much. Anyhow, on with the review.

I’ve spelt all of that title correctly including the full stops and randomly capitalised letters. I blame Apple for that stuff. I can’t blame them for bonkers (sic) naming conventions though. The Bonka (and that’s how I’m spelling it) is arguably, on price alone, the world’s greatest winter cycling jacket. Is it bonkers good? Bonkers expensive? Or both? At an RRP of £330 can it ever be remotely justified?

The Bonka has been knocking around for a few years now, it was actually first released around 2011. What’s remarkable is that it still looks modern (in a way only Assos can pull off). A few details have been refreshed to keep it up to date. It replaced, at least in that the others were discontinued, the venerable Airjack 851 and Fugujack jackets. Assos don’t claim this as a direct replacement. I do. Both were superb jackets. Indeed, if you can find either of them at a reasonable price now they continue to push the boundaries. Arguably the 851 Airjack belongs in the pantheon of iconic winter jackets. As much an art form as a piece of cycle clothing. And the Fugujack? An Airjack on steroids. Suitable for only the very coldest of days. There’s no escaping the S&M look though. I had an Orange backed 851 and it was a very wonderful thing.

One of the (many) things that Assos do well is theatre. Even the lowliest of jerseys comes in a presentation wallet, the shorts in slip boxes and the Bonka in full on grand opening presentation mode. It’s not just a box, it’s a display containing all of the pertinent information about the product. This is no plastic bag. It’s an attention to detail that’s probably pretty cheap to pull off but elevates the product above its (chiefly Italian and British) competitors. You pay for it, naturally. Theatre is good. 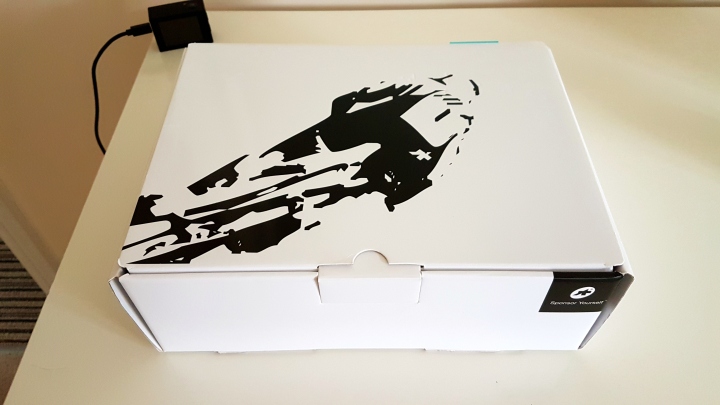 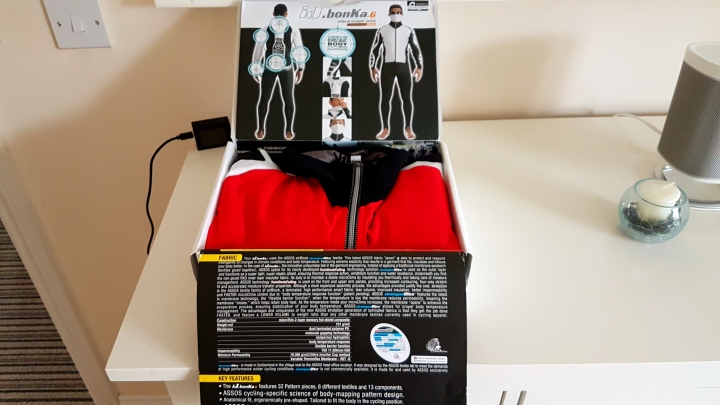 The Bonka comes in two types of fit, the Cento (tested here) is for the more svelte athlete and the Mille for the larger bodied one. Many years ago I ordered the (XL) Mille and had to return it for the Cento in XL. That made me happy as, clearly, I am svelte (insert smiley). You get a more race fit with the Cento. At 39″ chest it’s spot on on me. I’d suggest it’s good for a maximum of 40-40.5 chest. I’ve not tried the L in Mille but I do think it’s worth trying them all on to get the right fit. The Mille seems to be in very short supply now so I wonder whether it’s being phased out.

The range comes in 4 different colours, each varying only the front colour. The red, pictured here, is my favourite. Then there’s a blue (not available in Cento) black and white Personally, I’d avoid the latter. It’s just one more white thing to keep clean and this is winter. There’s a 5th ‘colour’ as well, the Profblack version (only available in Cento). It’s all black losing the sleeve design but gaining a few subtle changes. I have to say that the current obsession with black from Assos and Rapha (to name a few) is a tad unsettling but it’s all about giving more choice. Visibility aside, it’s as good looking a black jacket as it’s possible to be. 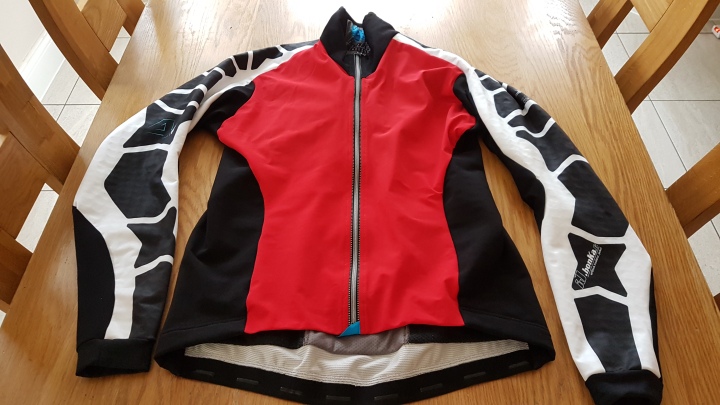 A colleague once remarked to me that she thought that the sleeve contrast was very effective, she’d been following me in a car. I think that’s a fair point, the contrast of the shapes is something that catches the eye. The front zip is reflective as well. The front section is all ‘windstopper’ but, as you’d imagine, it’s all Assos’ own work consisting of a variety of proprietary fabrics. Assos described it as follows:

Being a windstopper type fabric it is also very water resistant. There’s no overt mention of a DWR treatment but the panels behave as if they’ve been treated in that manner, mostly. The red front, side panels and back arm sections all see rain run straight off. The patterned front of the arms tend to soak up water. I’ve no idea whether that’s because they are not treated or just the nature of the fabric. It does limit this to damp rather than wet conditions. That said, on my previous version, it laughed in the face of snow, hail and pestilence. I’m becoming a little undecided about full on water protection. If it’s that cold and that wet that you require something quite so hardcore you may want to stay inside. So I’m coming round to the idea that something warm that deals with some water is good. The Mossa.2 achieves that with aplomb, ditto the Castelli Alpha jacket. The Ale PRR range, yes to the warmth, no to the water. The Bonka is somewhere in between.

The cuffs are properly terminated and snug. There’s just enough space to squeeze a glove into the arm rather than over it if that’s what you want to do. There’s nothing awfully technical about the waist section other than the nature of Assos’ own fabric which is superbly stretchy. Silicone grippers keep everything in place around the back section. 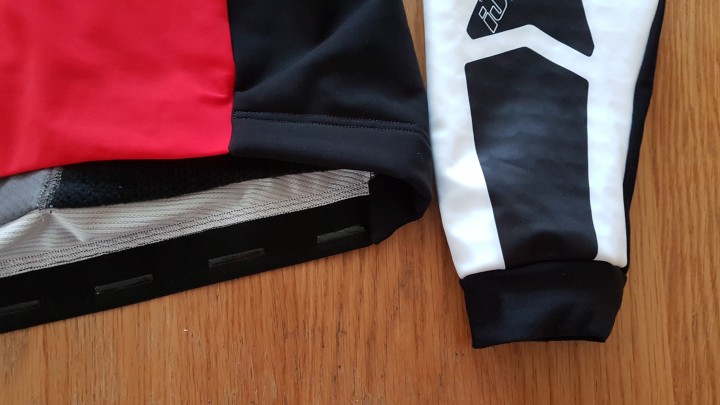 You may be able to make out some indentations in the arm section above showing through. Most of the time I’d just show you what the inner fleece section of a winter jacket looks like. But not here. To appreciate how Assos achieve this warmth and the tech that goes into it you really need to see this thing inside out. Voila. I should add that if you ever forget what it’s made of you only have to look at the back label and the instruction booklet that runs down the inside of the zip (seriously). 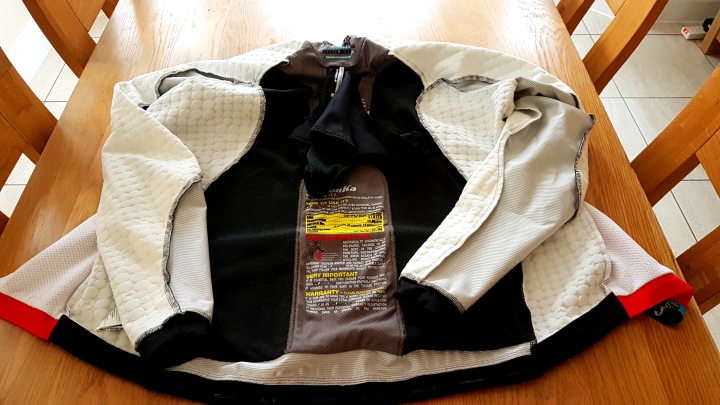 The front panels are, in effect, double lined. Windstopper and thermal. They allow independent movement of each part. The dimpled approach of the sides, arms and shoulder sections lead hugely effective insulation. The inner arms a different material. And the back is a more jersey like material. This is not a full shell. That might surprise you, the approach taken by just about everyone else is that only a full shell will work in the harshest conditions. But Assos don’t take the approach that everyone else takes. Not only is this spectacularly warm, it’s also breathable. That said, when wearing the most heavyweight base layers I did notice a little bit of moisture build up in the arm section which is the only section where (two materials aside) it’s arguably all round shell. Where the Bonka succeeds over other jackets is that breathability. Snug, warm, protective, temperate. 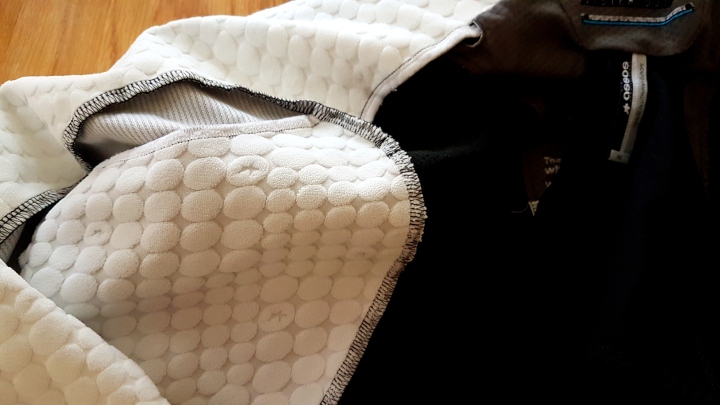 Round the back we lose the colour entirely. There’s still some contrast with the white shoulders but it’s all black round here on all versions. That’s in contrast to the ij.habu5 jacket which goes all black at the front and takes the colour round the back. There are a plethora of pockets here, two bigger sides ones, a smaller middle and two zipped ones. Only the bottom strip is reflective. 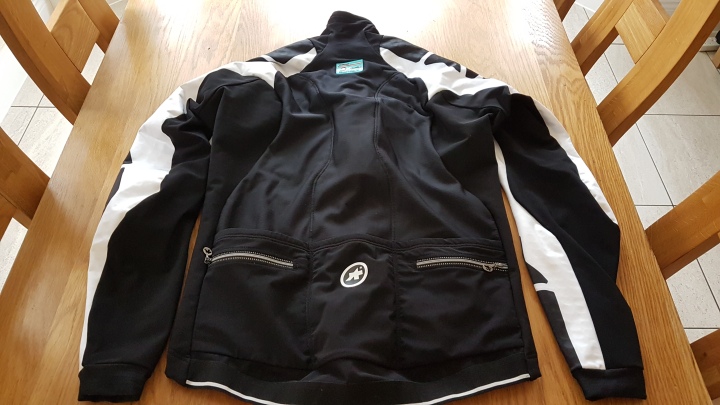 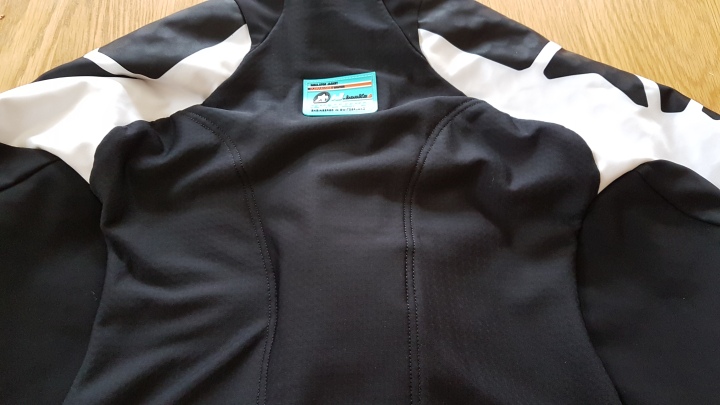 You can see how all the various fabrics fit together here from the windstopper type in the shoulders to the more meshy roubaix type fabric in the back. The stitching here is Assos’ ‘rear stabilizer pattern design.’ I can’t say whether that structure is better than no stitching but can say that the back of this jersey works perfectly. 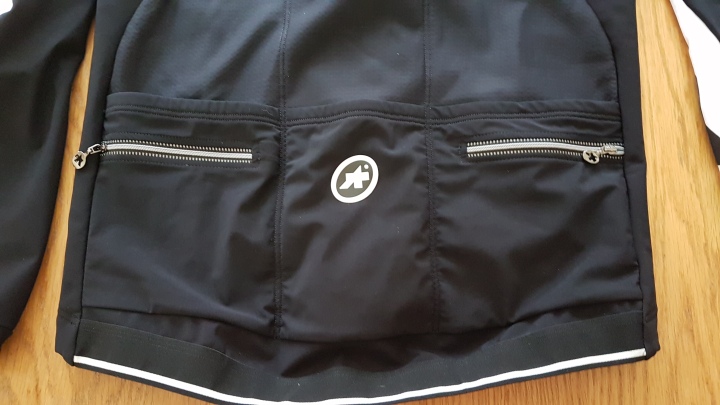 Warm? You bet. Assos say you can wear this at 0 degrees. I say you can wear it below that if you use a suitable base layer. A Craft wool one will do the job or you can get Assos’ own winter base layer. If you want to move up the temps slightly then a thinner base will still offer considerable protection. But don’t imagine that there’s much to be gained in wearing this above 6 degrees or so. It’s too warm for that. Yes, it breathes well. But that’s not what it’s for. It’s for the days when you need full bibtights, overshoes, gloves over gloves, the works. Is it warmer than the Mossa.2? They’re very similar overall. But it’s that breathability that clinches it for me.

Damp weather? Yeah, it’ll do that as well. Most of it, including the non windstopper parts, will shun rain effectively. But the front facing aspects of the sleeves don’t fare as well. So this isn’t as good as the Castelli Alpha/Espresso or Parentini Mossa.2 in that regard.

Crash? Yeah, they do that as well. So if you crash within a year of purchase then, if you can, they will repair it. I’ve used that when I came off in a CX race. Put a big hole in my Mille bibshorts. Off they went, they came back about 2 weeks later fully repaired. Not as good as new, it was the insertion of part of a new panel, but perfectly usable and not even noticeable unless you point it out. If you do find a defect with a product then Assos ask no questions. I’ve owned a lot of their kit. I have never, once, found a defect with any of it. I cannot say that about any other manufacturer I’m afraid.

But, let’s get down to it, £330. What did you expect? You’ll have read my review of the world’s most expensive cycling jersey. The only surprise, in this case, is that it’s not even more. And that’s a hell of a price. It’s two Castelli Espresso jackets. Well, that’s not fair, the Bonka is easy to find at £270, and that’s only a £100 more than the Espresso (review of that coming soon). It’s actually only a tenner apart from the Castelli Elemento 2 7X air. But, you know, there are many out there with £50 winter jackets that they swear by. It’s resolutely not worth buying now. Winter’s over guys, perhaps a cold shot in the next few weeks but it’s not the investment to be making now. Keep an eye on it though, I reckon you’ll see bargains by March and some stellar reductions come April. I’ve seen them drop under £200. Buy it in Spring, stick it in the loft till December. Stay off the pies.

My view is that this is a labour of love. It’s the best balanced between warmth and breathability. It’s good in the damp but not as good as others. It is the best fit and it’s easily the best made. It should be, given the price. It’s probably not necessary to own this in the UK now, you’ll be lucky to get more than 2 weeks out of it a year. But, let’s put it this way, it’ll still be as good as new in 2030…………….if we’re still here because, you know, uranium……bad things……