Following on from my reviews of the rather excellent Giro Empire VR90 MTB shoes and the equally superb Giro Privateer R I’ve been testing Giro’s Republic shoes. They’re not far from being the middle choice between the full on raciness of the Empire and the more languid approach of the Privateer. And spot on for a bit of cycle touring or commuting.

It’s yet another entry into the lace up market. And they work just as well as the Empire MTB and Road shoes in that regard. If you’re yet to try laces on a cycling shoe then I can assure you that they are a very good choice, depending on your discipline. Indeed, there are really only two drawbacks, getting them tight in the first place, which can be sorted with a bit of practice, and getting them wet. The latter is something difficult to avoid but, in practice, you won’t really notice wet laces unless you’re tying or untying them.

The Republic range is MTB pedal only and the range is divided into the LX (brown leather or the grey pictured here) and the stock Republic (black ‘leather’ and black or green ‘canvas.). In terms of RRP they range from £139.99 for the Republic to £159.99 for the LX version. But shop around and you’ll generally find all but the grey ones for less than £100 and often less than £90. The grey hover around the £110 mark, and we’ll get to why that is a bit later.

The sole isn’t carbon. It’s merely nylon. So you do lose that bit of stiffness that you get with the Empire (which are full carbon) but you gain a lot more of the ‘being able to walk without looking like an idiot.’ And that’s pretty important because these are aimed at commuting, the road less travelled and not falling over in coffee shops when getting cake. The walking sections are all replaceable, the quality is top notch so these should last for ages. You can buy spare laces and, if you want, go for an individual look by contrasting the colours. Grip is good, and while you won’t be getting traction on a cyclocross mudfest you will stay upright in the Cafe when your SPD-SL mates are all walking like ducks.

In terms of comfort they are great. Not quite the slipper upper of the Empire (which is in my view one of the most comfortable shoes ever made) but they more than make up for it with the overall feel of the upper and sole. If you do run MTB pedals on a race/sportive bike I’d say you’d lose very little on your average sportive and, frankly, you’d probably gain something by way of comfort. My size 45 is perfect and compares very well to the Privateer in terms of toe box wiggle. The Empire are slightly smaller in that area but not awfully so.

Once again, using the laces is a joy. They tie up well and sit in the little lace garage half way down. As I noted with the Empire, the laces aren’t abrasive so they can slip a little as you’re tying them up. But as long as you tighten each section methodically then you won’t need to stop to do them up again. In use there’s no heel lift and they feel controlled.

But if the brown leather LX are undeniably more sexy and the green army canvas certainly more cool, why the bog standard grey ones? Well, because of this. 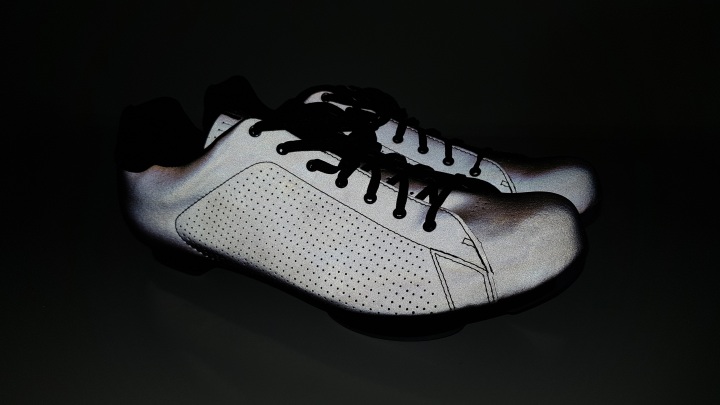 No officer I don’t have reflectors on my MTB pedals, but just look at my shoes. The effect is a startling one and adds that little extra on a dark commute or through the night audax. Indeed, I can’t think of a better shoe to wear over huge distances.

They’re pretty breathable as well, given all those micro perforations. Though, of course, that is going to let some of the cold and wet come in come winter time. Stick some overshoes over though, and you’re sorted. Indeed, sticking overshoes over the top of a pair of lace up shoes is considerably easier too than a pair with buckles and boas. Something to think about.

Another day, another great pair of shoes from Giro. And now that the steel bike with the rack has arrived, they’re just the thing I needed. Good stuff.