Castelli seem keen on confusing people. When the Gabba was launched some years ago it quickly became the stuff of legend. I’ve written about that legend before in, for example, my Parentini Mossa review. The Gabba is a quite brilliant piece of foul weather kit. What it is not, and it has never claimed to be, is a waterproof jacket. It simply cannot be because of the nature of its construction. There are others which are likely to keep you drier for a bit longer, such as the Mossa and Lusso’s Corsa Rain Jersey  or even their Max Repel Jacket. But none of this should detract from what Castelli started. It’s a superb bit of tech which makes riding in foul weather a bit more bearable.

And, in the beginning, it was quite simple. There was the Gabba. A short sleeve jersey that the pro peloton wore when it was grim. Soon it was joined by a long sleeve version. Then came a gilet (called the Fawesome) and, finally, there was a convertible version. And, Fawesome gilet aside, everyone was quite happy with the naming convention and knew what they were getting.

And then Castelli changed it all. They launched the Perfetto jersey. For a time that was ok. The Gabba remained in all its various forms and everyone knew that the Perfetto was a light version of the Gabba. It remained ok until Castelli then decided to ditch the name Gabba on all but the short sleeve, umm, Gabba and rename everything else Perfetto. So, I’ve produced this handy guide to all the variants for you.

All Gabba and Perfetto are made from a Gore fabric. The relative thickness of that fabric is what differentiates them in addition to how the back of the garment is made up.

So, you have the following types of Gore fabric in play:

The following items can therefore be considered as part of the ‘Gabba family.’

And then you have the true Perfetto (light)

I wrote about the first iteration of the Castelli Perfetto last year. I thought it was a terrific piece of kit but, as you’ll see from that review, I thought that there were sizing issues. Those issues, I am afraid, remain. But that’s ok, you just have to be aware of them and decide how to deal with them.

Once again the Perfetto Light 2 is made, in the main, from Gore Windstopper 150. It’s around 25% lighter than the Gore X-Lite used in the Gabba. So, in theory, you can use this in a wider range of conditions. Castelli ‘score’ the Perfetto as 4/5 for windproofness, 3/5 for insulation and waterproofness and 4/5 for breathability. On the heavier Gabba 3 those scores are similar but waterproofness gains a blob and ups to 4/5. Both the Gabba and Perfetto are rated as usable (in short sleeve form) from 10-18 degrees.

As far as the front of the jersey are concerned there are improvements. The waist has more in common now with something like the Alpha jersey, that is to say it’s more of a flat elastic band rather than a rouched elasticated waist. The fit is, in my view, better in that regard. The arms are as before, a good tight fit with zero flap. The zip doesn’t have a storm flap like the Gabba but, in practice, it keeps everything out.

One of the features I’d still like to see on the Perfetto and the Gabba is a bit of shoulder taping. The seams still face where the rain comes from and this would add something in my view. It’s interesting that the new Alpha ROS (rain or shine) jacket and jersey have adopted this bit of weatherproofing). 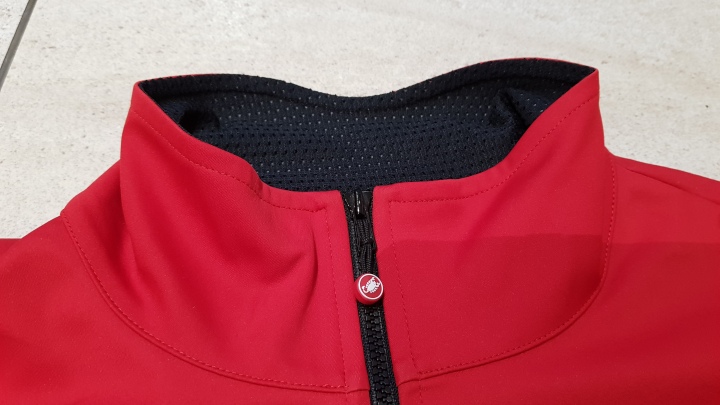 The neck remains the same, that is to say a mesh lined collar shared with the Gabba family. In practice it’s very good and ensures any irritation caused by dampness is minimised. It’s a fairly high collar and it is subject to some sizing issues. So, let’s deal with those.

Last year, when I was perhaps slightly bigger (around 40 chest) I tested the XL and found it very very tight. I’m actually smaller this year but wanted to have a look at the 2XL. Castelli say that the XL is good for 41 1/2 chest. and 36 1/2 waist and that the 2XL is good for 43 1/2 chest and 38 1/2 waist. I’m currently about 39 1/2 chest and 36 waist. Let’s see what the measurements tell us. The 2XL is approximately 20 inches across and 18 inches at the waist, double them of course. The Gore 150 material is super stretchy but, exceed those measurements and you’re looking at something very tight. By way of contrast my Perfetto Convertible, review next, is a mere XL. It’s certainly worth ordering two to try out. And, even though the 2XL is, IMO, the correct fit for base layers, the neck remains a little large. I could step down to the XL but it’s going to be much tighter, especially at the waist. Nevertheless, the very severe tapering at the waist of ther previous model appears to be much improved. 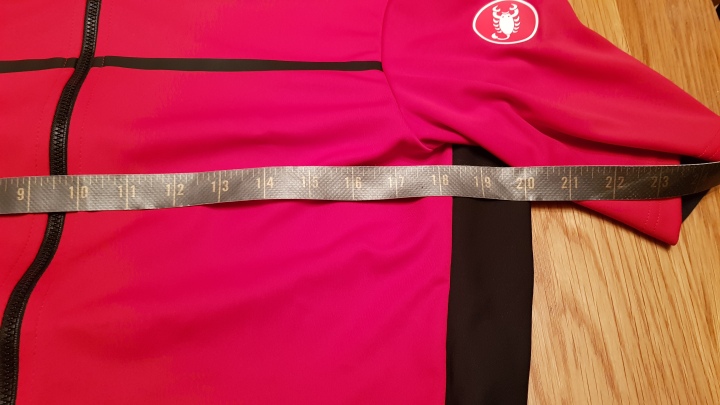 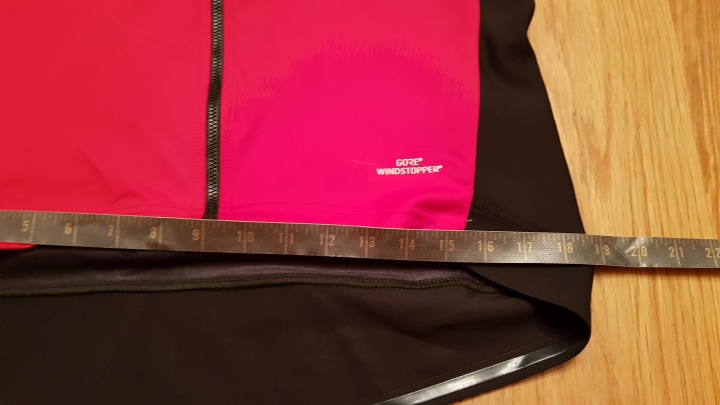 The back is, again, made of Castelli’s own DWR treated nano warm fabric. It looks solid but it’s actually fairly meshy and enhances breathability.

In terms of reflectivity, well, I’ve no idea what happened here. First, the positives, the drop tail is much improved in my view, it sits slightly higher and interferes less. It houses the reflective Castelli logo, and that’s good. But I don’t know why Castelli dropped the reflective trim that sat atop the pockets on the previous version. That was arguably better placed. Having the two would have been a better option. That ‘omission’ has been carried over to the Perfetto too. 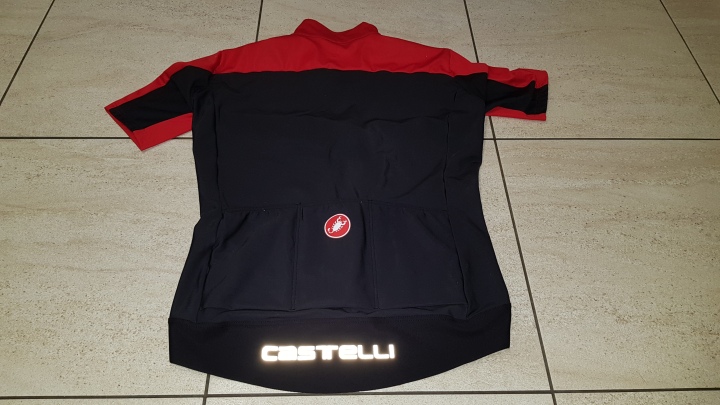 The nano warm fabric really is a genius thing. It’s not waterproof, it’s not nearly as water resistant as the front section, but it does have near magical properties of shedding water. 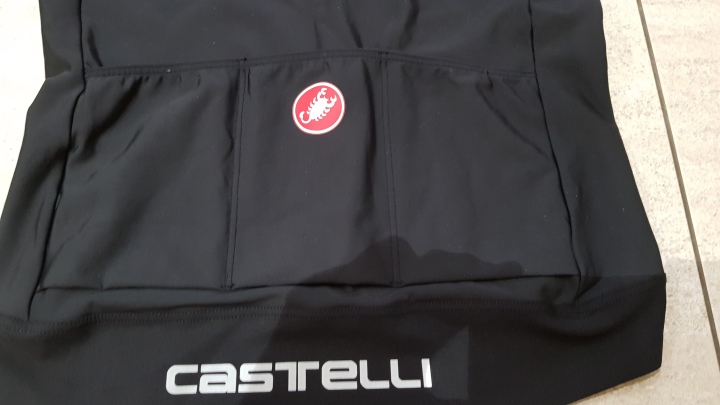 The pockets remain quite brilliant. Super stretchy and the drain holes have been carried over too. There aren’t quite as many of them now but those that remain are reinforced with metal eyelets.

It remains an excellent go to piece of kit. Partner it with arm warmers and a base layer and you could probably get this down as low as 5 degrees. It’s certainly bearable up to Castelli’s claimed 18 degrees and probably up to about 20 provided that the temperature doesn’t stay there.   In terms of rain performance it’s very good indeed. It’s better in heavier rain where the combination of the DWR treatment and Gore fabric allow the larger beads of water to run off. In heavy drizzle water does tend to sit on the fabric a bit more but it still takes a while to come through. The best part is how quickly it dries. If the sun comes out, you’ll be dry in no time. If it doesn’t and, as has happened to me in the last few weeks you get to work soaked through, it takes very little time to dry it on the back of a chair.

It isn’t a rain jacket. But then a rain jacket isn’t much fun when you’re working hard anyway. It’s exactly as it describes itself, foul weather gear. And that’s fine. It’s great for all sorts of disciplines, road, commuting, CX or MTB. It cleans well, it’s smart and, of course, being Castelli it should last for years. The DRW will wear off but reproofing is an easy job.

When I concluded my initial review of the old model I said it wasn’t quite perfect, not yet. It remains frustratingly close to being so. The sizing is off but that’s still a personal thing. It would be better if a Gabba owner could just choose the same size though. A little bit more reflectivity wouldn’t go amiss and the shoulders could do with a bit of taping or thinking about where those seams go. But in terms of price it’s more than reasonable, at £130 RRP it’s really quite superb. But, as summer ends (did it ever arrive?) a bit of shopping around could see you pick one up for less than £70. That’s a steal and you’ll get plenty of use out of it yet.

10 thoughts on “Castelli Perfetto 2 Light : and a guide to the Gabba family”