The MilleJacket Evo 7 should not be confused with the Assos Mille Intermediate Jacket Evo 7. They are quite different things though, on the face of it, look fairly similar. The Intermediate is, just as it says really, something for the milder days, though it’s well capable of dealing with some colder ones. The MilleJacket is a winter jacket. Sometimes the word winter appears in the description but often it does not. That means identifying it as a winter jacket requires bit of a leap of faith. Assos claim that it’s for the colder days. But it’s hard to get a sense on what that means. Colder than Intermediate? Colder than Habu? As cold as the Bonka?

And there’s a sense too that the jacket is a bit unloved. Have a google, it’s quite hard to find, depending on what you google for, and the lack of reviews is astonishing. Indeed, apart from two video reviews on google (both of which are in different languages) and one reference to it winning in a German MTB magazine test I can’t find a single thing about it. So I emailed Assos for advice and took the plunge. It was good to hear that loads of the UK staff are wearing their MilleJackets throughout the winter rather than the superb Bonka because, well, the Bonka can be a bit of overkill. If the Greatest Showman can swell its box office so much on word of mouth, where’s the word of mouth for the MilleJacket?

Perhaps one of the ‘issues’ is that it’s ‘a bit different’. It’s also easy to see how you could be a little put off by its looks. Gone are the smooth arms of the Bonka replaced instead by something which appears to be a little more, bulky? 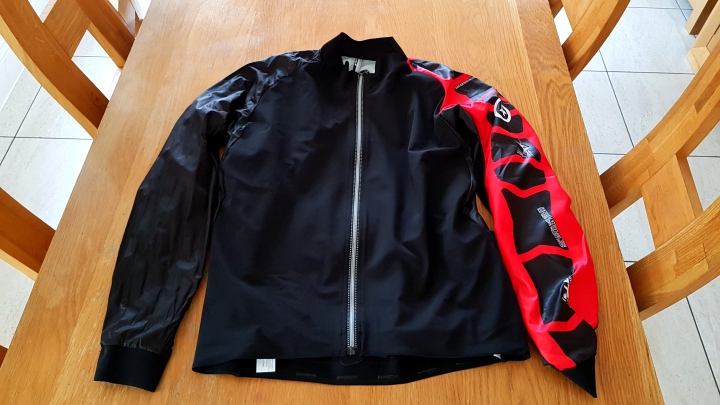 It does look a little unusual. Aren’t winter jackets supposed to be windstoppers with fleece lining? Isn’t that how it works? What you have here looks like some sort of hybrid shell suit affair. And, to an extent, you’re not wrong. But also very wrong.

When I looked at Castelli’s Potenza Long Sleeve Jersey last year I mused about how we’ve overlooked traditional approaches to creating warmth in our cycling clothing. For want of a better description the Potenza was a fleece cut for cycling, and worked very well because of that. And, to an extent, the MilleJacket is also something other than the norm. It’s essentially a fleece inside a shell with a beefed up windstopper front. I think, unless you can tell me I’m wrong, that is unique (some of the Sportful R&D may take a similar approach). It’s not a first because the predecessor to the MilleJacket was the rather wonderfully named iJ.Shaq.Uno jacket. I had a look at one in a shop once, felt it, was rather weirded out by it and wondered why it was needed. So I moved on and didn’t really give it a second thought. But I’ve been wrong about new Assos products before (see how I felt about lowering the belly on their shorts) so thought I would give this a go. 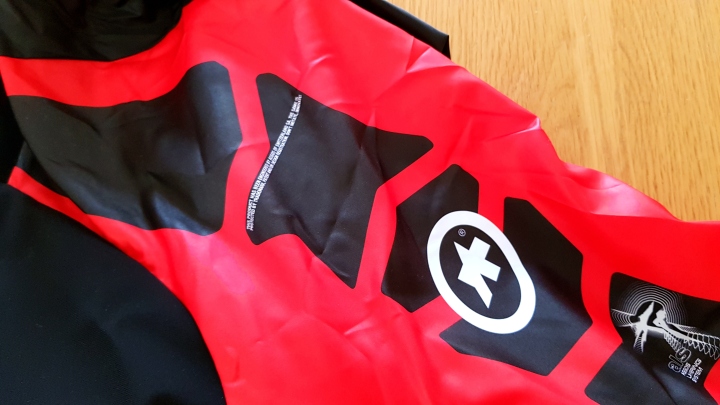 The shell sections of the jacket are made from Assos’ proprietary Plutocrat Ultra fabric. It’s fairly lightweight, water resistant (if not proof) and coated with a DWR repellent. But before dealing with the rest, let’s have a look at the inside. 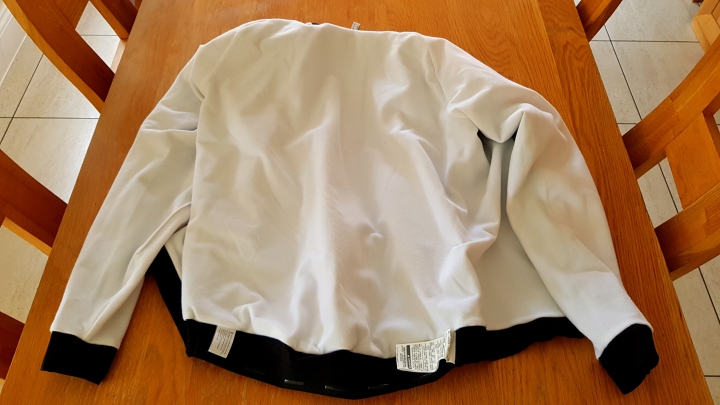 That’s a fleece. It’s also fairly lightweight, certainly hugely breathable (by itself, subject to what I say below) and sufficiently insulating. The fleece is, of course, attached to the outer part of the jacket but only in a small amount of places. That means two things, firstly quite excellent articulation across the board and secondly, insulation. Because the fleece moves independently there’s a layer of air between the fleece and outer shell/windstopper. And it’s that approach to layering that makes this jacket stand out against the competition. It’s ‘insulation plus’ rather than just relying on heavier fleece or roubaix lining underneath a windstopper fabric.  So, in essence, it’s a bit like wearing a microfleece under a light rain jacket. A bit, but that’s not really the whole story. 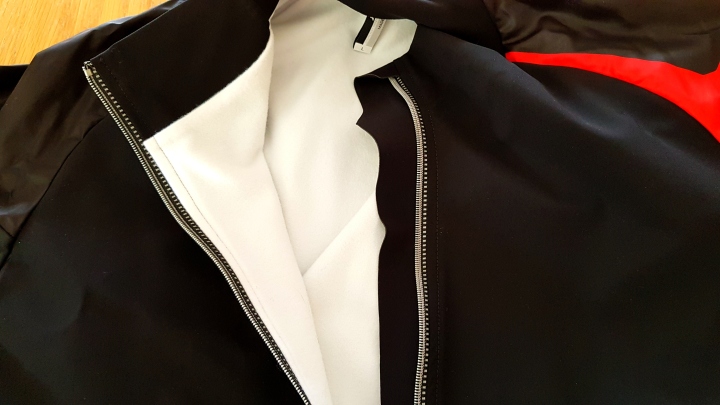 So, let’s get back to the front. The front section is made from the same type of windstopper that you find in the intermediate jacket. But, of course, it has a proper, articulated fleece lining. The zip has a baffle behind at the chest section, similar to the Bonka, but perhaps a little shorter. It keeps the wind out at speed. I did notice a very slight penetration at speeds of 40mph plus but, hey, that’s not exactly a common occurrence in the winter. I would say that the neck section is slightly short, so I’ve taken to wearing a neck warmer with this at all times. But, that’s not necessarily a bad thing in the cold anyway. There’s no integrated balaclava a la the Bonka. I quite liked that feature but it did mean you could feel it slightly at your upper back when not in use.

Assos describe this as being one of their most insulating and windproof jackets but not being quite as breathable as the Bonka. It’s actually said to be more insulating than the Bonka overall. So, perhaps, it comes as no surprise to find that it might be a little less breathable because balancing those things can be quite hard. In some respects, for example the main body section, I found it a little less breathable than the Bonka but, otherwise, they are pretty similar. Indeed, one would expect the almost twice the price Bonka to be better in this regard. But in terms of insulation and warmth, well, it’s actually really damn good. There is a massive difference between how the Bonka and MilleJacket work. In the Bonka you need to get out there, warm up, stay warm and work hard. Do that and the Bonka is brilliant. Slow down, it’s still great but the heat you build up can have an effect on your warmth if you cool down. With the MilleJacket you don’t need to warm up. Stick it on indoors and you’ll take all that warmth outside with you when you start. For an early morning ride in the winter, particularly on my commute, that’s an absolute Godsend. I’m immediately warm on the ride so getting to stay warm becomes so much easier. And you don’t have to work all that hard to stay warm because of the inherent features of the design. 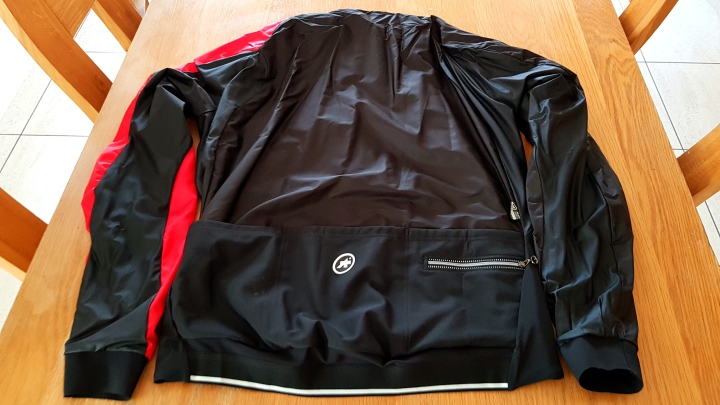 Round the back the shell continues. This is in stark contrast to the Bonka and Habu with their jersey type arrangement. There are three massive pockets and one valuables one. The reflectives are limited to one strip at the bottom but it’s fairly useful. The MilleJacket is available in four colours, Red, White, Yellow or Black, but only the one sleeve colour changes. All of the rest looks the same including the back and being black and shell like means it’s much easier to keep clean.

The RRP is £200. That places it around £150 cheaper than the Bonka and the performance, for me, is almost as good, and arguably better in terms of that early morning insulation. It’s also really good in poor weather brushing off snow, sleet and icy rain with ease. Being mostly shell helps enormously with this. At the moment, Assos will do you this jacket for £140. That’s a fantastic price for an Assos jacket, or indeed any premium winter jacket. Chuck in the Assos warranty and crash replacement and it’s one of the best hidden gem bargains out there at present. A word on sizing, this is a Mille garment so I can size down (or normal) and go for a large, just like the Intermediate Mille, rather than the XL of the Bonka Cento.

I’m glad I put aside my preconceptions about the MilleJacket. It’s actually become my go to jacket on cold days ahead of the Bonka now. It’s more comfortable over all, just as good in all weathers and, for me, a bit better in the damp. It’s warmer when you start out and maintains that warmth really well. It’s slightly less breathable but that’s to be expected and there’s not an awful lot in it. Indeed, I find the place for this is the commute, Sunday club rub, the Cafe run. Stick to sensible speeds and you’ll be asking “what cold?” Hoon it and you will get a bit hot, the damp you produce can then cool you down. So this isn’t for hooning it. It’s for being comfortable on the icy, chilly days. I like it a lot, I think you will too. It’s good to give products a chance. There looks to be a big redesign on all Assos jackets next year so I expect big changes to the models to take place. I’ve no idea how well the MilleJacket has sold. The dearth of reviews and comment means it’s hard to gauge. I hope that it remains because it’s a really nice jacket overall.

6 thoughts on “Assos MilleJacket Evo 7 : the one that you never hear about……….”