I don’t know how much longer the Hero Session 5 will be around. There are signs that GoPro will replace it with a cheaper entry level camera in 2018. But, when? Who knows. Replacing it might actually be a mistake. Unless the new one is just a cheaper version of itself.  GoPro currently sell 4 cameras. Ignoring the 360 degree Fusion, it’s 3. The Session 5 sits at the bottom of the heap. It’s RRP is £199, which is an awful lot less than it was a mere 6 months ago. Indeed, it’s £179 in most places, use a code and you could see it for £150. And that’s, frankly, an insane price. It’s worth adding though, if you buy straight from GoPro, then paying £59 more will result in an additional 2 year ‘you break it we replace it’ guarantee. Which is not to be sniffed at.

When I wrote about the Apeman Cam some time ago I concluded that, for the price, it was very good indeed and a better bet than the GoPro because of that price. At that point the Hero Session (not the 5) cam was around £150 and it wasn’t, it’s fair to say, all that well received. The Hero Session was a cut down version of the Hero Session 4 (not itself without fault) and was GoPro’s attempt at a budget entry level camera. It almost certainly had better optics and sound than a £50 Chinese cam, but it was debatable whether paying that was worth the extra cost. The Session and Session 4 are no more. The 5 has taken over the duties as entry level.

The Session 5 really is a mini marvel. No matter how many times you look at photos of it, it’s really hard to get a handle of just how little it is. It’s barely bigger than a 10p and, being a square, that applies to all sides. 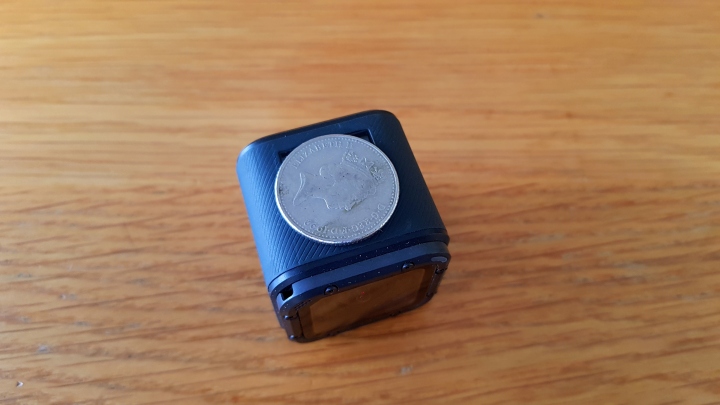 It’s worth starting with what you do, or don’t, get in the box. Basically, you get very little. A USB cable but no charger, it’s the new USB C type so, happily, I gain a spare lead for my Galaxy S8. You get a skeleton mount, a few sticky mounts for helmets and that’s about it. You don’t get any way, at all, of fixing it to a bike. Indeed, you’re actually more setup for skiing than you are for cycling. Which is a bit irritating. So, I’ve bought this type of ‘out front mount’ which places the GoPro well out of the way. 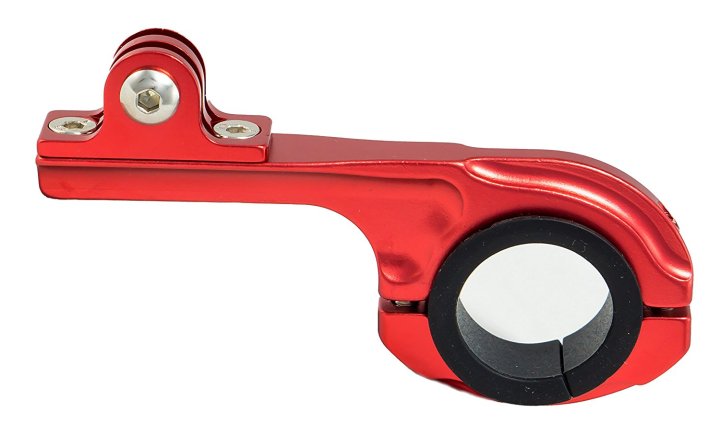 That said, I will shortly be adding an add on to the underside of my Garmin out front mounts from which the GoPro will then be able to hang down. It auto rotates its footage which is very useful.

The front of the camera is all lens. But you can just about make out that mic on the top left. There’s a smaller mic on the rear as well. The skeleton case is a skeleton and nothing additional is needed to make the GoPro waterproof. Indeed, it’s waterproof down to 10m without any additional housing. So, for rainy commutes, splashing around in swimming pools, it’s entirely happy. 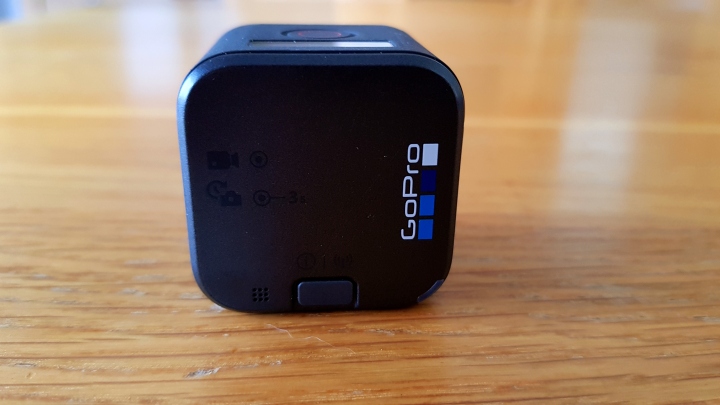 There are only two buttons, with the preference for function control being via the App, which I’ll come back to. That said, you can actually carry out most, if not all, of the functions via that bottom button and the record button at the top. It’s slightly easier with the App though. A lot of users claim that deleting the content of your memory card is a pain as you need to use the app to do so. And, of course, the app is on your phone. That’s incorrect. Formatting the memory card after a commute takes about 5-6 presses of the back and record button.

The memory card and charging port sit behind a door with a rubber seal. You can remove that door altogether and charge on the go. But, of course, you lose your waterproofing. No SD card is supplied. At the bare minimum, depending on your choice of record mode, you should be opting for a 32GB card. Mine is 64GB and, frankly, it would be better if I went for 128GB or carrying another card.

Visual quality, impact on the memory card and battery life all relate to the choice you make in relation to video settings, so, let’s plough through what you can set the Hero 5 to record at. 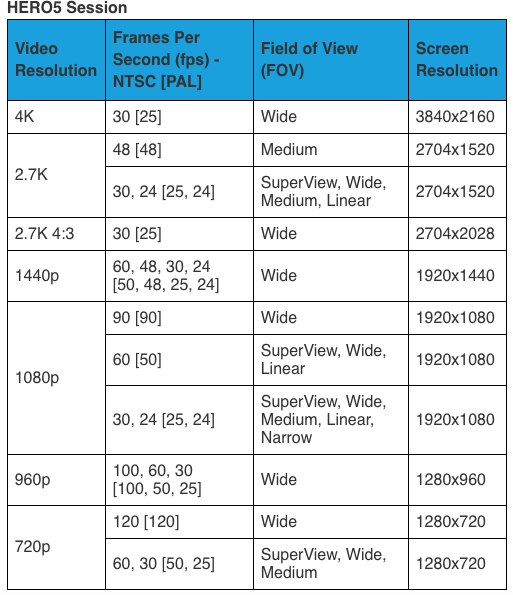 What’s immediately apparent is that this is a 4k camera. Whether you can actually watch that 4k back on any device you own is the question, but, assuming that you can, you have the ability. It’s all pretty straightforward. Choose a mode, choose your FPS and choose what type of view you want. I’ve plumped for 1080 HD, 60fps and wide view. Superview is, arguably, better for swimming, linear better when your standing still. 1440p is probably a fairly happy medium with quite a lot of devices capable of playing that resolution.

Recording time varies widely and there’s another complication which is GoPro Protune colour mode. I tend to turn this on as it results in a warmer, more colourful picture. Default is flatter. You can also set the Protune to flat, allowing you to edit the footage subequently with your own colour (etc) preferences. It’s been compared, a little, to shooting RAW files rather than JPEG, though that comparison isn’t entirely valid. But Protune files are a lot bigger than MP4 ones with Protune off. So they have an effect on you recording time. In some cases it can be significant.

If you’re using a 32GB card then most of the higher modes will record at about 60Mbps. So, for most of the 4k down to 1080 we’re talking about 2hrs 13m or so before you run out of space, for 1080p about 4 hrs. Stick it on the lowest, you may squeeze out 5. I get roughly 4hrs or so 1080 60fps with ProTune turned on on a 64GB card. Frankly, that’s enough, but, if I were to go on holiday and want to take a load to edit later, 128GB would be better. Of course, much of this is theoretical because your Session 5 will be dead after about 1hr 45m. For that is, pretty much, the limit of its battery.

And, that’s not really all that bad. It’s good enough for a day of judicious use on the slope. It’s good enough for even an extended commute. It falls far short, obviously, for use on a Sportive unless you charge it on the go. You do need to turn most of your stuff off to get to that level, so that means Wifi, Bluetooth and Voice Control. With them on it slips to under 1hr 30m in my experience. It doesn’t seem awfully affected by cold mornings though. Voice control is actually very good. So I had it on a few days while skiing just to see what it could do. A list of the commands can be found here

But, you’re here for the videos, they really do tell the tale, so here are some examples. All were taken at 1080/60. They all have signs of artefacts that are exclusively down to youtube. The originals are pristine with a level of detail that borders on the incredible. So bear those things in mind. The absolute killer feature on the Session 5 over every other cam I’ve tried is image stabilization. That eats some battery life too, but it smooths it out during the process and makes it superb for CX and MTB etc.

There’s a lot of detail on there. In fact, it’s a considerably better cam than the Hero 3 Silver which I owned a few years ago. Sounds is clearly better than the Apeman because of the nature of the case.

This was quite a flat light day (there were quite a few actually). But, overall, the image is clean and stable. The camera is mounted on top of my helmet, with a sticky mount and the skeleton case. Nothing additional is required to go skiing with the Session.

And finally, Centerparcs. And I think that’s really somewhere that the camera comes into its own. It’s easy to hold and use, underwater quality is great and it’s just a really nice thing to take on holiday.

A few quick words about the App. It’s fairly straightforward to use, just pair the phone with the camera, select the app and you can change all the settings, use your phone to view what the camera can see and edit/download some of your footage with the Quik companion app. You can also edit stuff on your desktop as well. If you have that kind of time investment. I use mine mostly for commuting now and the real bonus is that the GoPro will pick out a camera every, single, time. Low light, however, does present it with some challenges. If you want that kind of dark level detail then a step up to the Hero 5 Black is in order. The Hero 6 black is even better again. Both those cameras do come with some additional resolutions but, arguably, their real raison d’etre is the addition of a touch sensitive back screen.

I really like the Hero 5 Session. It’s size just makes it easy to use, easy to operate with little fuss. The optics are clear, the sound is excellent, and the price now very good indeed. In my view it does offer something more than the cheaper clones out there and sets itself out as being a very good product in the marketplace.