Winter is coming. But let’s get through Autumn first. It’s already gone a bit chilly, last week seeing me commute in with temperatures hovering around 6 degrees and then being a balmy 15 on the way home. It’s hard to know what to wear in such circumstances. Having a gilet is always a good option and I seem to have my fair share. Recently I’ve been wearing the Rapha Pro Team lightweight a lot because it stows to nothing. But if it’s cold it doesn’t really do the business. The insulated gilet, something you didn’t think you’d ever really need, really does. But back to that later.

Ok, mine is the RCC version. Rapha seem to be in the business of cutting back on some of their ranges at the moment so you can’t go direct to them for a jersey like this, or indeed the non RCC type. Instead Sport Pursuit have the plain pink and burgundy versions for about £72 against an RRP of £145. And that RRP is an awful lot for a jersey such as this. That said it is only a bit more than the short sleeve version……..

When Rapha say midweight what they really mean is a tiny bit heavier than a normal summer jersey. It’s a bit warmer, and I mean a bit. Now, in any normal British summer I’d say that the midweight stuff is actually ideal and more than you’d ever need. This summer it’s been truly midweight in that it’s for the cooler days. But don’t think that this is in any way properly thermal, there is no fleece backing at all, it’s just material. But it’s surprising how comfortable it is. In many ways if you’d expect to wear the arm warmers all day, just choose this, a far more comfortable option.

Being Pro Team it’s predictably close cut. I still opted for a large because that’s rather the point of the range. It’s designed to go fast. For £145 RRP there’s not a massive amount going on here in terms of what is present but it is extremely well made and, at least in the pink, pretty eye catching. I do think the RCC design is a better one overall but, of course, you have to be an RCC member to get one, or head over to eBay.

In terms of the approach there’s a really tidy rubberised waist band that locks it all into place, some nice mesh at the lower back to keep you cool. The zip is uniformly excellent of course and locks into place at the neck. The neck section is cut very low so, again, this isn’t really for the really cold days. I’d say you could, with an appropriate base layer, wear this down into high single figures on its own if you expect it to warm up later. In terms of being overwhelmed? You could easily wear this into the 20’s and use the arms effectively as sunscreen, it is SPF50 rated after all. All of the hems are bonded so it’s a damn comfortable thing. 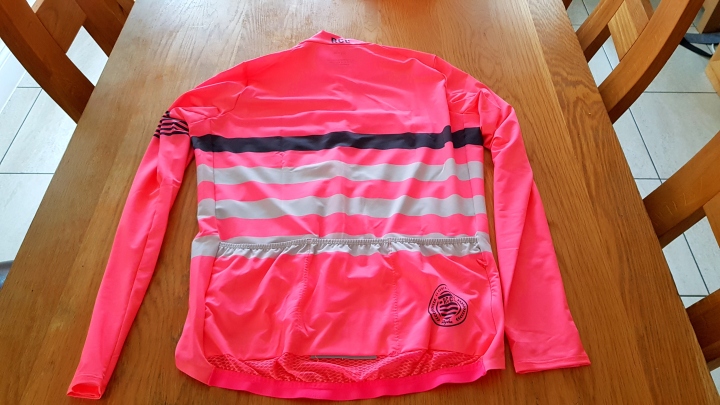 Round the back there are three cavernous pockets and a tiny bit of reflective down the bottom. That’s useful at night if not overwhelming. In the day this shade should see you seen. The termination on the arms is uncomplicated and comfortable. In many ways it’s difficult to say much about this, but that doesn’t mean it’s not great, far from it. In common with the Pro Team jersey range generally it’s the absolute comfort and breathability that stands out. It gets on with being brilliant and you pretty much forget about it. Is it worth £145? Well, that’s the £145 question I guess. It’s certainly superb so it depends what you want to pay. It is a tad more than some other equally brilliant brands (check out my next review) but at £72 currently it’s a bit of a bargain.

Bright, isn’t it! Other colours are available. At least, they were. Rapha seem to have removed it. I don’t know if it will come back. Mine was £60 in the sale, normally it’s £130. I have to say, it’s worth every penny. It is something that you didn’t know that you needed. Part of the trick here is making something insulated without being massive. And if you have minimal insulation that means you can pack this away, how the hell can it keep you warm? Well, I have to say, at 5-6 degrees this and the above long sleeve with no base layer, was a perfect combination. Yes, my arms could have been warmer but if your core is warm you can live with that.

The magic is in the insulation which Polartec Alpha as used in the outdoors industry. The thing is, there’s not very much of it. But there doesn’t have to be. The outside of the Gilet is DWR coated and the insulation is hydrophilic. It will keep you dry for a while, then it will get wet, you’ll still be warm, and you will dry out quickly. But, really, I’d keep it for the dryer days.The insulation isn’t all the way round, it’s pocketed where you need it. The side panels are pure mesh, which means that you won’t overheat. And when you fold it all up there’s an elasticated loop to keep it that way. It’s not the smallest thing in your pocket but perfectly acceptable.

Being part of the Brevet range it’s positively luminous in headlights too. Size wise this is a large and it’s clearly a tad larger than its Pro Team cousin above. But it’s still pretty form fitting because if it weren’t it just wouldn’t work.

There are no rear pockets but that’s fine. It’s an overlayer after all. The Rapha logo is reflective as well as the rear bands. 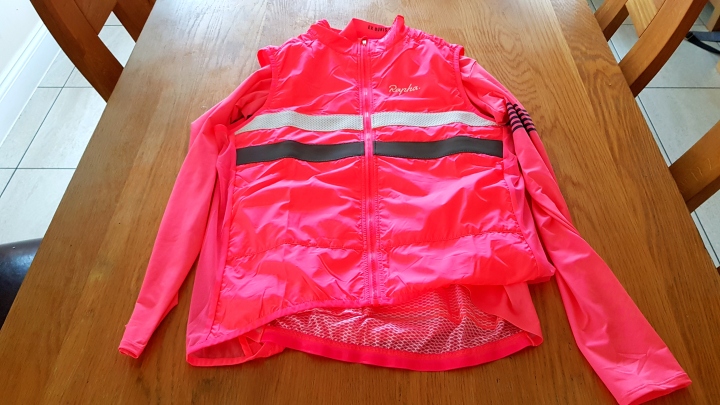 And the colour is pretty much the same as the jersey underneath because, these things are important.

Ultimately, my view is that this is a pretty indispensable piece of kit. It’s superb for even cold conditions and could be added to many types of long sleeve jerseys or even a short sleeve with arm warmers. It’s that versatile. You could even use it, I guess, as some sort of base layer underneath a jacket but I suspect that would be a little too warm and clammy. If you’re confident, you could even wear one of the more sober colours as casual wear.

It’s a damn shame that you can’t find this at the moment. I don’t know what Rapha are planning for the Brevet range because it’s a brilliant range. I hope that they bring it back soon but, if they don’t, I’d recommend heading to ebay and finding one because it’s a superb bit of kit that’s really worth the asking price.