It’s also worth remembering how we got here. Below is a pic of the original See Sense light. It was unique, it was brilliant but it was a little eccentric. No on or off buttons and relied on you to turn it upside down, rotate etc to turn it on and off and alter stuff. It’s brilliance however, is without doubt. 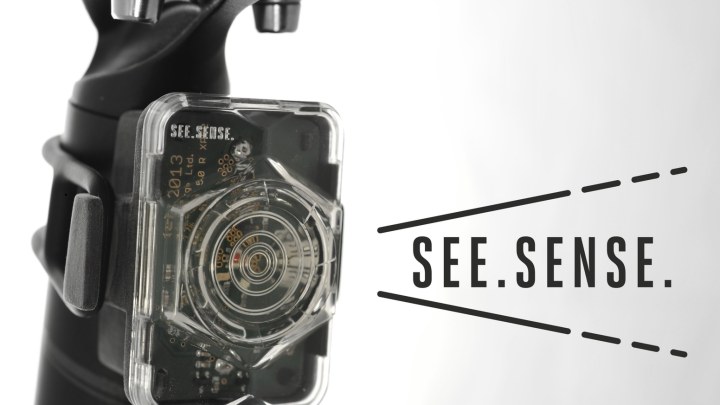 Skip forward to the Icon, launched a few years ago, and we get less eccentricity and more features, such as the mobile app and improved performance in relation to braking and auto detection. It also got quite a bit smaller. But, skip forward another few years and we’re really ramping up how small a light can be while still incorporating the features of its predecessor. 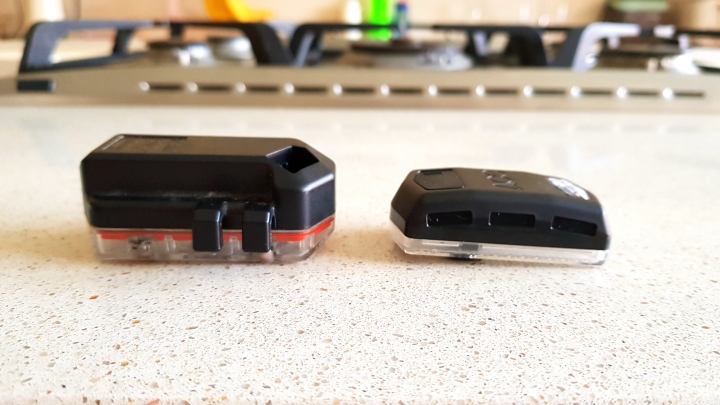 It’s super cute. Bear in mind too that the Icon, pictured left above, doesn’t have it’s mount in place and that the new Ace, even with mount, remains smaller than the Icon without mount. It’s considerably lighter and just, very sleek and modern. Some of the surface area is clearly lost by the smaller size but, in practice, that doesn’t amount to any change in visibility or brightness. It does lose some lumens to the lesser of the two original Icons (2 x 95 lumens plays 125) but that doesn’t really amount to very much. It really is an excellent evolution of what was actually a pretty amazing bit of kit. In a world of spin and review I can honestly say that the Icon has always stood out. It’s ever present on the darker days and just keeps on going.

Let’s start with what’s in the box. Even the box itself is way smaller than the one that the Icon shipped in. It’s hard to believe there’s a light in there. Another bonus is that it should, even with packaging, slip through the letterbox if you’re not at home.

It’s pretty much as before, so you get mounts, rubber bands, instructions and a charging cable. The eagle eyed amongst you will note that before, the Icon had arms either side to take the rubber band and that, in essence, it’s mount was built into the charging cover. That meant should you want to go aero or mount in some other way, you had to bodge or buy additional mounts. Now, the light is just the light and the mounts are elsewhere. Given the astonishingly small RRP (£44.99) for a 125 lumen light the amount of stuff you get is truly impressive.

Taking a look at those mounts, you get the main mount (centre), an aero mount (left) and a clip mount. The latter is a great idea for sticking it to rucksacks but also, if you’re a winter runner, this could be a great addition. Now you stick the main mount on, say, your seatpost, attach with the right size rubber ring and then clip your Ace into the bracket. More on that in a moment.

You get a comprehensive set of mini instructions which you should keep safe. It’s good to say actual instructions included rather than sending you to the internet or the App. On that, the iOs version is live (and I’ve therefore screenshotted that later) but the Android version is a week or so away at the time of writing. Everything works WITHOUT the app but you get more functionality and control with it. We’ll also come back to that.

It really is tiny. The power button is straightforward, long press for on and off and then presses to cycle through different types of flash. The rear has a small plastic cover to keep the rain out. It’s IP67 rated and, provided you don’t stick it absolutely in line with your tyres in the wet you shouldn’t see any problem. You shouldn’t get any issue with IP67 anyway, given that the test is to withstand 1m of water for up to 30 minutes, but it’s good to be sensible, particularly if you’ve not reinstalled the cover correctly. Around the right hand visible side on the photo you can see a series of notches (which are also present on the other non visible side). Those allow you to clip the light into place in 3 positions. Thee effect of that is to mount it neutrally or with an upwards or downwards angle depending on what your seatpost is like. Because the mount remains on the bike (you unclip with a small fixed lever) removal is much much easier than before. It’s probably worth investing in some spare mounts if you want to move even quicker between bikes.

I’ve not been able to test the ANT+ connectivity as my Fenix 5 doesn’t pick up the sensor but I understand that it does work with devices such as the Garmin 1000 in effect as if these were Garmin lights, i.e. turning them on and off etc.

In use it’s 125 lumens, will run for 10 hours and is really really bright. You get a series of flash types ranging from solid to psychedelic. If defaults to 100% brightness, which is easily good enough for the day as well, but, using the app, you can turn this down. So, let’s take a look at the app.

Connection is ridiculously easy and it paired first time with no issues. You can turn it off and on, engage brake mode, change the flash cycle etc, just like you could do before. It’s a way better looking app, clean and efficient.

Once again the auto crash alert and auto theft alert are present. I’ve set mine up, tested it and it’s pretty seamless. As with my previous icon review I can’t test falling off so we’ll take it as read. The theft alert can be set to particular zones. You can see how effective the old one was here.

All those reactive technologies are still there. So, as stated on their website, “When you face moments of increased risk on your commute (e.g. at junctions, filtering traffic or high-stress intersections), ACE reacts by automatically flashing brighter and faster to make you more visible to other road users. It also shines powerfully both in daylight and at night-time, helps you be seen from over a mile away, and gives you 200° of side visibility.” There is always criticism of gimmickry from some quarters in relation to bike safety but, for me, the Ace (and its predecessors) are just better lights than the competition in what they offer as extra protection.

And then, then the really clever stuff. It’s hard to evaluate, yet, how successful this is but it has to be a really good thing. Have a look at how See Sense are helping with connected cities and cycling safety here. There will, inevitably, be comments about data collection but the whole thing is compliant, anonymised and really really helpful. If it even achieves half of its aims then we really are looking at a truly useful societal product. A game changer. Which is probably why British Cycling have made See Sense their official light supplier and crowdsourced data and insight supplier. A partnership that will only help to develop See Sense’s exposure and lead to further future innovation.

Much of what we have in the Ace is as before. It’s that bit better, that bit smaller, that bit more useful, and then we come to the price. It’s £20 cheaper than the Icon and 2 years on. Ok, it’s technically a little less lumens but it’s practically as bright, it’s lighter, it has more useful mounts and it’s just a brilliant little thing. Get one, get the front as well, in fact get them as a bundle and that’s a mere £79.99.  They’re essential lights, as cheap as the non smart competition. Ace? Excellent product name, bang on.