The Parentini Mossa was, as far as I was concerned, the definitive all year round rain and wind protection jacket. It was an absolutely sublime thing. It was also nice that they were never ubiquitous. So they had that exclusivity factor. Which was a shame, because Parentini really did deserve to sell them by the proverbial bucketload. It’s still available, still brilliant, and there are a number of different colourways and forms now.

Generally the Mossa was perfect. But I did note, in my initial review, that there were a few areas that could be improved on, notably the absence of a storm flap and also the positioning of the seams on the arm. There was really nothing else that I thought was necessary. But, quite remarkably, I think the Vita is more revolution than evolution, particularly in terms of the range of temperatures in which it can be worn.

The Vita is available in three different “styles.” The “normal” Vita is available in four different colour accents, then there’s the Neon and, the one I’m currently wearing,  the Kaos. They’re pictured below in sequence. So, that red accent version also comes in orange, lime and grey accents. The difference is all in the design of each but they are all effectively the same jacket.

And, yes, they are all black, though each has a different type of method of “catching the eye.” That is, I suppose, a legitimate criticism so if you want a lurid fluorescent colour then I am afraid you’re going to have to stick with the original Mossa. It’s worth noting that the Kaos and Neon themes are also carried over to Parentini’s excellent Scatto jersey which I reviewed earlier in the year.

I opted for the Kaos style. That’s a new “theme” in Parentini’s current line up. Regardless of the all black construction the contrast theme on the sleeves does make it, in reality, a quite visible thing. It’s also a fairly useful addition in terms of signalling when that contrast does actually stand out. I do think that the pictures don’t really do it justice either. It’s smart and modern and looks very premium. 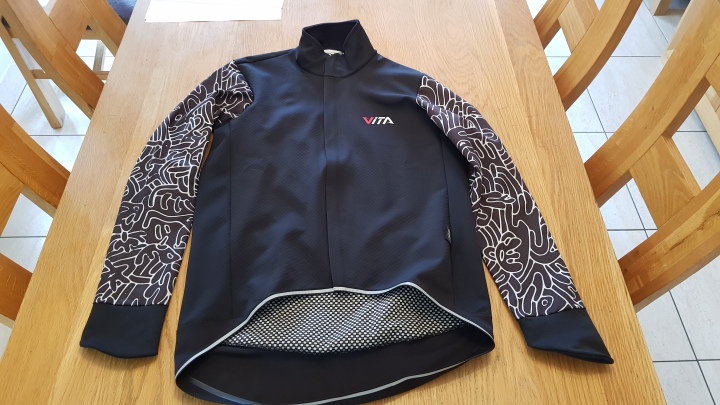 So, looks aside, what’s it all about? Well, Parentini describe this as being an all weather, three season garment that’s capable of warding off rain and keeping you warm and/or temperate. They claim that, in combination with a suitable polypropylene base layer, it will keep you warm down to -15 and cool up to +18. That’s a pretty bold claim.

Let’s start with the rain. The Vita, like its Mossa forebear is, for all intents and purposes waterproof and breathable. It’s a softshell and it achieves that by virtue of the Windtex Pro membrane which forms pretty much all of it. That membrane is, of itself, waterproof. The addition of a DWR coating means that even the heaviest rain will just run off. Of course, we are into the territory of “how long does the DWR last?” Well, possibly not for ever, but with sufficient care you can make sure it lasts for ages. In addition the membrane will remain waterproof and, by following the steps outlined here you can reactivate the treatment should it start to appear that its worn off.

In my view, having worn an awful lot of “Gabba” type jackets over the years the Mossa was always the real deal. It was incredibly waterproof and just an all round brilliant proposition. The Vita is better. It’s better because the Windtex Pro is an evolution of the already excellent membrane in the Mossa. But it’s better because the seam placing on the arms and the addition of that zip storm flap improves on the Mossa’s brilliance. There is still potential for water to come in. In the absence of taped seams that is always the case but, for a softshell this is about as good as you’re ever going to get. For UK weather, it’s superb.

But the other aspect where I think the Vita really has moved on is in it’s usability in a wider range of temperatures. It feels a little bit better at the really low temps. So, I’ve been using it with a suitable base layer in temps as low as -3 without issue. That’s impressive. If the ride was all -3 I might opt for a warmer winter jacket (more on that in a future review) but you could ride the whole thing in this. What’s more, at this time of the year, return home temps are often much higher and into the teens. And the Vita works well there too. In fact, with the right combination of base layers and depending on how warm or cool you run, this could be your only three season jacket. You can even wear a sleeveless base layer here and let your arms run free inside the jacket. It all works, it’s comfortable and cosseting. It feels like a storm shield, as the name suggests.

The new Windtex Pro fabric is a quite amazing looking thing, as you can see above. It’s that pattern which allows greater warmth and breathability than the old version. You can also see, in the picture below, how it creates a subtle waffle effect which aids the level of warmth that the jacket provides.

As you can see in the first picture the jacket has a nice high collar (which is sized appropriately), an excellent zip with a tag that’s possible to use with gloves and a very decent length. It’s a shade longer than the Mossa, I feel, which is also very useful. The waistband is flatter and more elastic than the older “rouched” style of the Mossa. It’s a much more modern looking thing and really brings Parentini up to date. 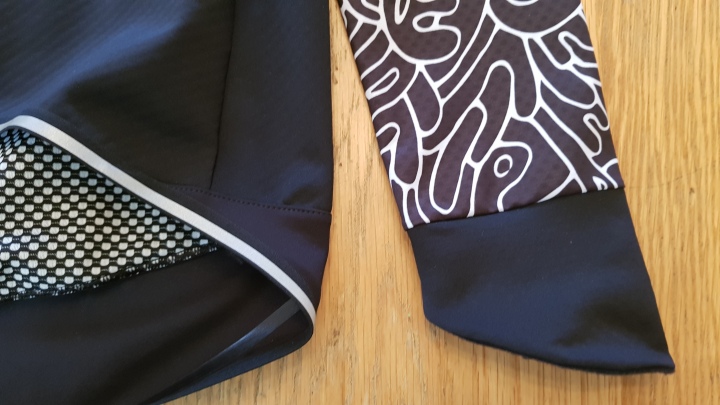 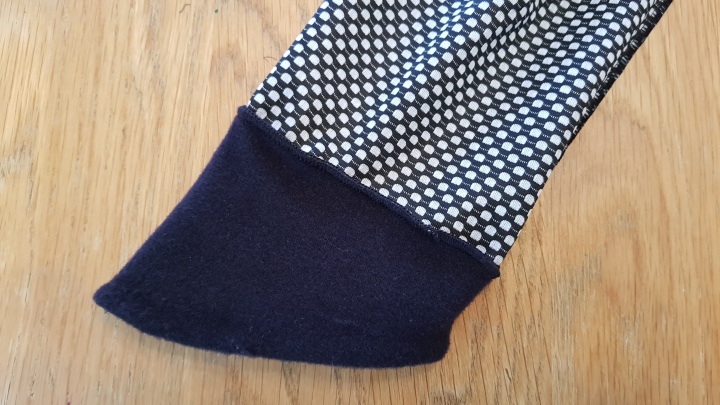 The tapered arms also deserve a special mention. They’re fleece lined inside and cut in that tapered way. The result is an overall better fit on the top of the hands with a bit more movement underneath. They’re also windtex (outside) so there’s no issue with water getting in there either. And, in practice, no water seeps onto the fleece then moves up the arm either. 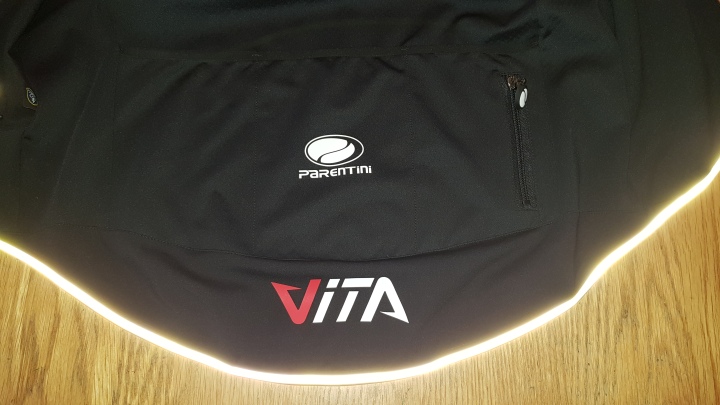 Round the back and we have three large, elasticated rear pockets, one zipped one for valuables and a load of nice shiny reflective trim (that extends round the front waistband too.) There’s a dropped tail which is just the right length.

Mine is a size large (it’s always nice having a large in an Italian brand). It’s absolutely perfect in terms of overall fit and how it’s snug without being too restrictive, allows sufficient room for even a winter base layer and also how there’s no need to tug on any part of it to reposition when on the bike. I’d prefer to see, perhaps, a few mm or so extra width on the elbows and arms, but that’s a personal thing.

And that brings us to price. It’s 198 euros which is around £175 at the moment. You can buy it on the Parentini website here and, when I checked last week, there was free shipping to the UK. The question, inevitably, is how that stands up to a Gabba/Perfetto long sleeve. Well, the RRP of the Castelli jacket is pretty much the same. That it commands a substantial discount at some points of the year is, of course, relevant. But at the moment they’re pretty much direct competitors. But that kind of misses the point. The Vita is that much better than the Perfetto that, really, you just need to spend that difference. Indeed, I’d urge you to try out the Vita as it really is an absolutely brilliant product overall.

I didn’t think the Mossa, a few details aside, could be bettered. But this is better in every way I can think of. The Mossa isn’t dead, but long live the Vita.

6 thoughts on “The Parentini Vita Jacket”