I’m a big big fan of Giro shoes, you know that, right? So I was, automatically, a big fan of the previous range of Rapha shoes because, some tweaks aside, they were Giro shoes. Some were quite different in look, see the GT shoes for example, some were pretty similar, see the Climbers, and some were pretty much identical, see the Cross shoes. So, if you loved and fitted Giro, you couldn’t go wrong with the Rapha stuff. Price wise they were very expensive, of course, but compared to the Giro, not half as bonkers priced as you might think.

The new Rapha range is designed from the ground up, which is a good place to start for shoes. There’s no Giro involvement this time round but I guess the Giro influence, fit and experience must at least partially remain because, and I’ll come back to it later, fit is mostly Giro-esque. if you take XX in Giro, you should be good for an XX in these.

The new range has been simplified, it’s on road and off. Though it’s not perhaps as simple as it seems, there’s no reason you couldn’t do lots of gravel in the new Classic (road shoes). Pricing is £180 for the Classics, putting it in competition with even mid premium competition and the Explore shoes are £220 which is pretty close to the RRP of the Giro VR90. There are 4 colours to choose from in each model, limited editions black pearlescent and high vis pink, and plain black and white.

They arrive in a signature Rapha manner with a lovely box, canvas bag with extra heel inserts, laces etc. The unboxing experience is typically Rapha.

Because I had become a fan of the Black Empire SLX I opted for black here. But it’s not plain, it’s an oily pearlescence that’s reminiscent of the Rapha criterium jersey with its slick oil like pattern. It’s aesthetically very lovely, or, as we say in Wales, lush.

So, where to start. Obviously these are a combination of lacs and straps. I’ll be honest, I haven’t really moved the straps, you don’t need to to get them on. That strap is reflective, which is a nice tough. You get a spare pair of laces with every shoe. The lacing system does away with eyelets almost entirely. It’s a “double wall lacing system,” which sounds a little complicated but essentially the microfibre upper forms the loops and then heads back on itself, providing the durability to the loops and the structure to the shoe. Arguably, lace against anything is going to be abrasive so it will be interesting to see if they stand the test of time. But, as things go at the moment, there’s no sign of wear at all. The lacing system is perhaps slightly different in feel to the Giro, for example. A pull on the upper section doesn’t necessarily lead to the mid or lower section getting tighter. So you have a large degree of adjustment. You can’t, of course, adjust on the fly. But you shouldn’t need to.

You can get an idea of what Rapha are getting at with the double wall stuff in their picture below (credit to Rapha). 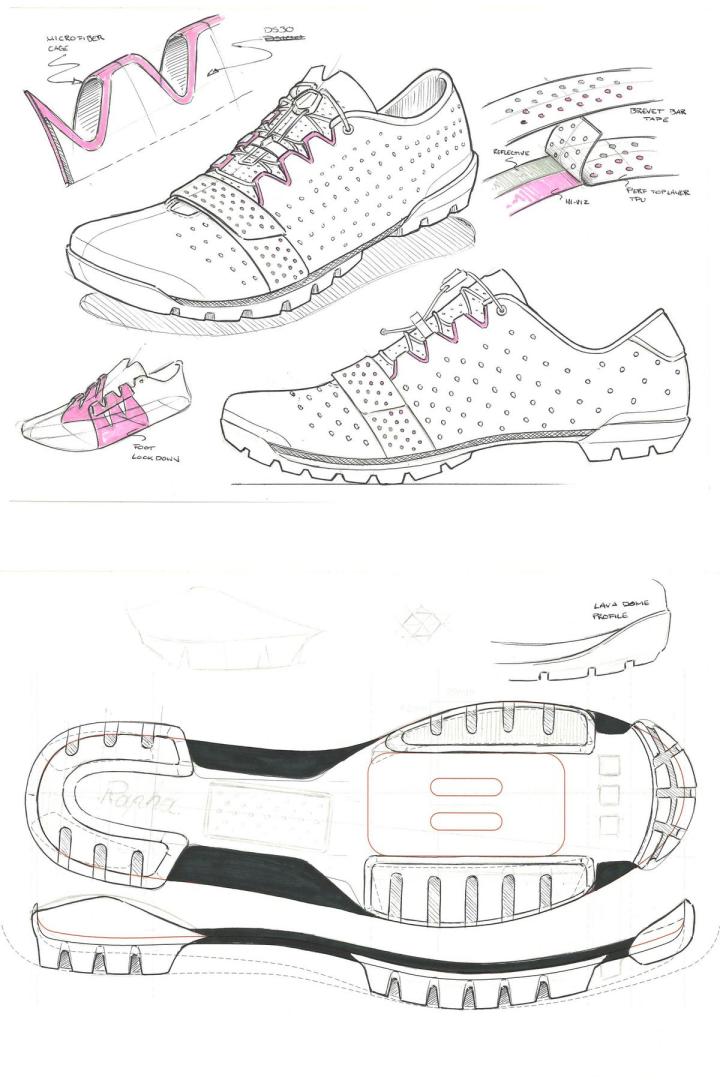 In terms of lace length I fancy they are a tad longer than others. That midfoot elastic to tuck the laces in is present so you don’t have to have them flapping around. You may have seen pictures of the EF Education First team wrapping the laces around the sole, 70’s Rugby stylee. That’s not really necessary, but if it’s the look you want, then great.

The toes are exposed to the world (and tyre rub etc) but seem pretty hardy. There’s a little bit of protection below in the form of the toe bumper. So far I’ve scraped them a few times but its just rubbed off. Black is a much better colour for that type of thing. They are ridiculously easy to keep clean.

That heel tab is also reflective. It’s a nice thing too, subtle branding telling people what you’re wearing, if you’re into that sort of validation. The microfibre upper is perforated all over. These are great for the summer and ventilate very well indeed. Equally, they’re pretty good on cooler days too, if you have the right socks.

The sole is full carbon. Which at £180 is a great price. But rather than have a couple of tiny walking rubber bits at each end, Rapha instead opt for a full thermoplastic cover. Yes, this adds some weight. But, at the end of the day, this is still a ridiculously light shoe, if not Empire SLX light. That makes walking in them way easier than in others though walking in Shimano cleats will always be the limiting factor.

I’ve been riding in them since release and, I have to say, they are my favourite shoes. They’re that bit more stylish and well thought out than the Empire SLX and, despite the change in last from that model, still supremely comfortable. There are no hot spots, no issues over time, just brilliant, comfy shoes. Stiffness is still excellent if you want that sort of thing but, I think, most of us don’t need it. As all day touring, sportive, audax, shoes these are, I think, unparalleled. And, at the price Rapha want for them, they’re something of a Rapha bargain really. It’s going to be hard for all those writing below the line comments to be able to say point to that price and be anything other than positive. Who knows, maybe we’ll see a Rapha Core shoe at some point?

This is pretty straightforward. They cost a bit more (it’s hard to know exactly why) and they’re pretty much the shoes above made for the road less travelled or, as is becoming more and more common, for those who just want to be able to walk properly on all their rides. I swapped out the laces here to the more fetching red spotted reflective ones.

There is, as you’d imagine, a bit more protection going on here. I’ve swapped to these from my existing VR90’s and, while they are not quite as stiff, I do find them to be a better all round shoe overall.

Arguably that extra cost is seen underneath with the carbon plate being totally protected by that thermoplastic tread. Rapha have cut the plate a little shorter at each end they say to enhance walkability. That’s fair, it does take some stiffness out, some have complained about it, I find it absolutely fine. Some of the comments on the Rapha site have been that these are bigger than the Giro last. I think there’s probably something in that too or, rather, the VR90 (and Code on which the CX ones were based) were a little narrow in that area. So, for me, that bit more room is better. Especially if you’re using these in the winter.

Once again, these have gone to the top of the pile as it were. I commute in them and use them off road. They clean up well, they’re incredibly comfortable. I guess, at £220, there is a bit of price creep there and a few other brands get a look in. It might be better if they were sub £200 just not to cross that mental barrier. But, compared to the VR90, I think they are worth it. Whether they’re better than true XC shoes available at much less is a moot point I think, you buy these for aesthetic as well as the function. On that, they do deserve your attention.

So, a ground up design by Rapha is a winner in all respects and, Explore shoes aside, there’s none of the usual price complaints to kick around.